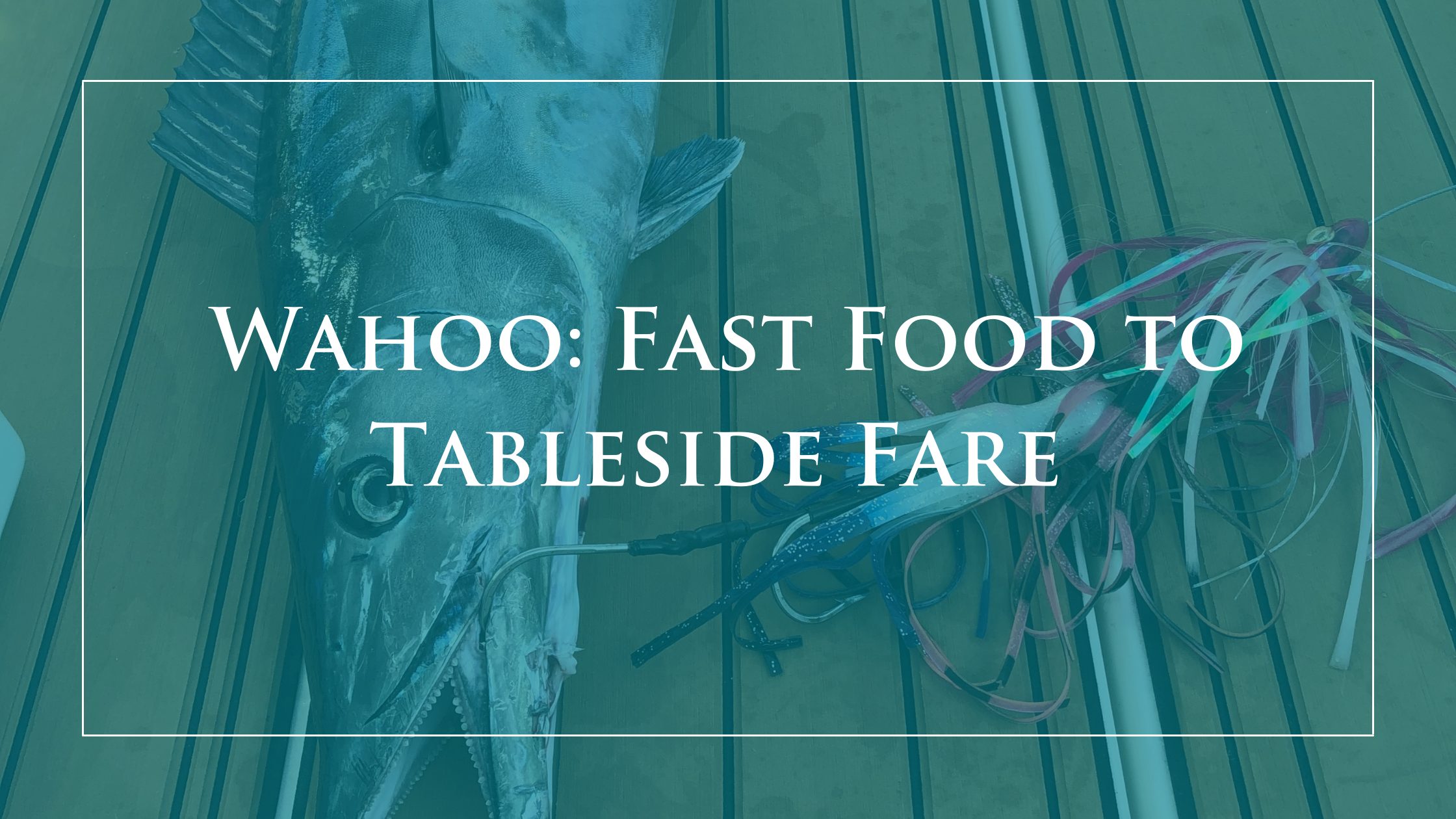 There is something unique about hearing a reel go off, and scream with excitement! The energy is contagious onboard. What’s better than that? A wahoo on the other end. Wahoo not only makes for great eating but tends to be a relatively easy species to target in South Florida and the Bahamas during the late Fall and Winter months when water temperatures cool.

High-speed trolling is an effective way to catch wahoo, but other fishing methods such as slow trolling dead bait or lures, pulling planers, fishing beneath the debris, and even flying kites can produce wahoo. We sat down with three of our very own HMY Yacht Sales Professionals to talk about wahoo conditions, tips, techniques, and even table fare.

Brian Weaver and Chris Vacchio both recommend fishing the Bahamas for wahoo. Weaver recommends fishing “Long Island out of Flying Fish Marina and San Salvador at the Diana Bank. The current and the ledge make both locations ideal spots for wahoo to inhabit. The wahoo tend to be 30-40 lbs. heavier than the fish you catch up in the northern part of the Bahamas.”

Chris Vacchio recalls some of the best wahoo fishing he has ever seen take place off San Salvador and Chub Cay.

“It’s a wonderful eating fish, it's a beautiful fish, but you have to get off of the couch to catch ‘em.” - Chris Vacchio

The Name of the game... Wahoo Techniques

As discussed previously in this article, there are a variety of fishing methods when it comes to catching wahoo. Two popular methods used by our brokers interviewed include planer fishing and high-speed trolling. Covering a lot of ground is critical when targeting this pelagic fish.

Brian Weaver explains, “When you’re high speeding I like to try and cover more ground until I find the fish. While high speeding I tend to go 15-16 knots. Once I find where the fish are congregated, I prefer a slower troll with ballyhoo and islanders.”  “When I fish my regular ballyhoo, I prefer to fish at 8-9 knots. This tactic is a lot more fun for the angler. You get to use lighter tackle and it’s more exciting.”

Chris Vacchio also prefers a slow troll with ballyhoo or planer fishing for wahoo. The bite is more dramatic,” says Chris. Chris explains that wahoo tend to hang together in groups with bait. “A lot of times when there’s one wahoo, there's more. If you get a bite on the planer, when it trips, the planer raises up to the surface. By having a trolling lead on the other side, I like to think we have another bait that is going to get bit in this scenario. There is a whole spread that can attract multiple bites.

“You always want to take slow wide turns, if you take a sharp turn, you drop speed allowing for one side to miss the bite or cause a tangle,” says Chris.

How to Prepare Your Wahoo:

We asked our brokers to share their favorite catch and cook recipes for wahoo. Or in this case, recipes that lack cooking- as many people prefer to eat this fish raw in sushi dishes.

Brian Komer: Prefers wahoo seared when served as a dish. He recommends cutting the fillets very thin. (Almost like paper) Then keeping it simple and eating the wahoo raw, using “good ole soy and Wasabi” to complement the thinly sliced wahoo.

“I cut the skin off. Then I take butter and coat a Pyrex dish. Next, I lay the wahoo steaks in the Pyrex dish and lightly add salt and pepper. I then lightly sauté white onions and mushrooms in a pan. Once done I lay the sautéed onions and mushrooms over the wahoo steaks. I add white wine (Santa Margarita-Pino Grigio). I add a quarter-inch of wine into the Pyrex dish. Then I take a block of parmesan cheese and grate it and top the dish. Then I cook it in the oven at 350 degrees for about 15 minutes give or take on the oven. I recommend keeping an eye on the parmesan cheese. When the parmesan cheese browns it’s dinner time!!”

If you’re looking for the right personal boat to get you out on the water, our team can help with that too. View HMY’s inventory online today.