Excitement is mounting as the Arcadia 85S, Arcadia 100 and Arcadia Sherpa gear up for their premiers in Cannes this September at the Cannes Yachting Festival, one of the largest and most exclusive yacht shows in the world. The Arcadia 85S and Arcadia 100 will be making their world debuts while the smaller, 55 foot Arcadia Sherpa will make her first in-water debut. Sherpa was originally introduced at Boot Dusseldoorf in January 2016.

All three of the new models feature Arcadia’s fresh and innovative sky-lounge flybridge Concept. The innovative designed allows for the flybridge to convert into a sheltered third deck with complete enclosure and windows for outside views. The space can also be climate controlled with air-conditioning. Each of these Arcadia Yachts models all have semi-displacement fiberglass hulls. The Italian ship-builder says that “when combined with its lightweight superstructure, the hull allows for lower-power engines, reduced fuel consumption and better running costs than on traditional designs in the same size ranges.”

Like all Arcadia yachts, the special-edition 85S, the 100 and the Sherpa also have solar panels atop the largest part of their superstructures. Each panel supplies 3.5 kW to 5 kW of electricity, allowing for refrigerators, lights, battery chargers and more to run without need for a gas-powered generator. Being as eco-friendly and efficient as possible is the name of the game with Arcadia Yachts. While Arcadia Yachts are well-known for their smaller carbon footprints they also offer a unique design which is minimalistic but still incredibly striking. The sophisticated styling of the entire fleet's exterior is eye-catching and the interior aboard each Arcadia model is equally as luxurious.

The Arcadia 100 is an achievement in every sense of the word. With the latest in ecological technology, she is as cultured as she is stunning. The 100 provides some impressive fuel consumption statistics. She has a good top speed of 18-knots, though even when cruising at 16 knots, fuel consumption is an efficient 61 gallons per hour. At 14 knots, it consumes only 40 gallons per hour, and at 10 knots, fuel consumption drops to 13 gallons per hour. A feat that can hardly be accomplished in most boats half her size. The remarkable solar panels that been implemented on all Arcadia models can run everything except for the air conditioning, which is a typical power drain on any vessel. Owners of an Arcadia 100 have the choice of four- or five-stateroom layouts on the lower deck, including a full-beam owner’s suite with a separate twin-sink head that includes a bathtub. 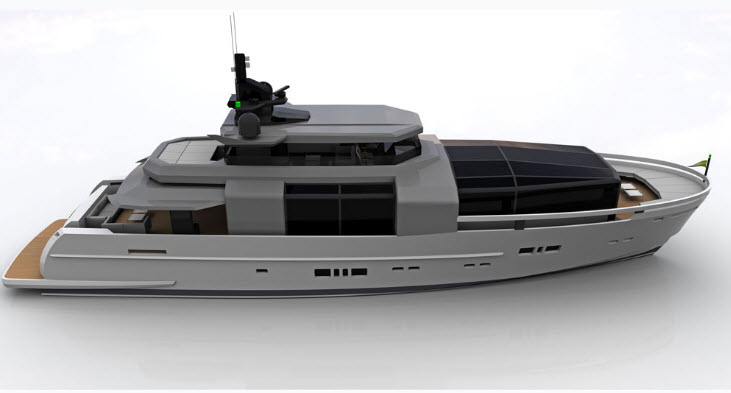 The Arcadia 85S is a special-edition version of the Arcadia 85 and what sets her apart from her older sibling is the new sky lounge-style flybridge. Instead of being just an open-air deck, the flybridge can be fully enclosed by side and rear panels that slide up electrically. This is a feature that has been implemented on all three of the new Arcadia models. The main saloon can accommodate up to eight guests, while four well-appointed staterooms are positioned on the lower deck. The onboard tender garage can house a 13-foot tender and a personal watercraft. Arcadia 85S is an eco-conscious ship, one of her biggest highlights. Although she is powered by twin diesel engines she can operate off of solar power like the other Arcadia builds. Idling along at 6 knots the 85S burns four gallons per hour and running at an economical 12 knots she will burn 24 gph. The first Arcadia 85S was delivered to her new owner in Spring of 2016. 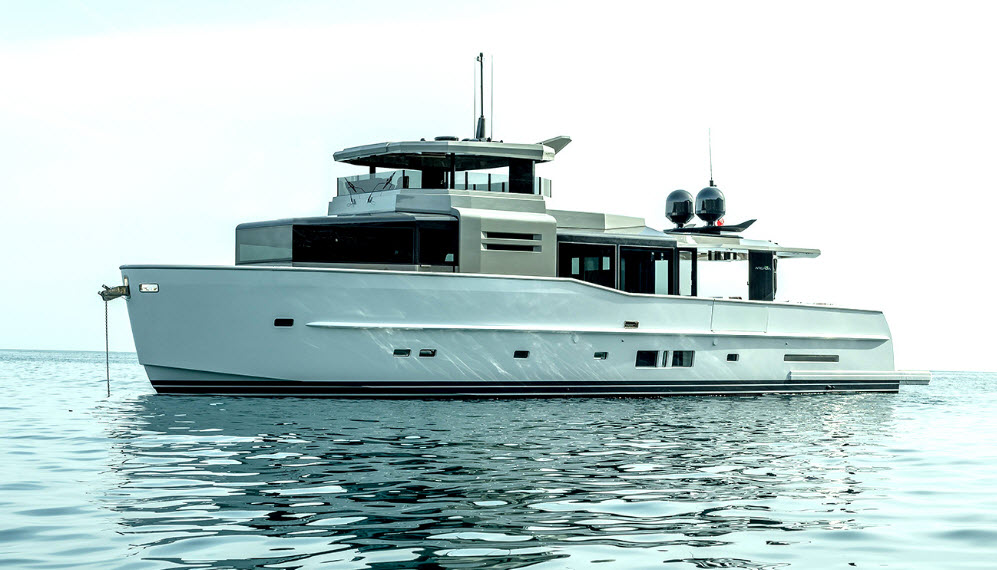 The little sister of the Arcadia fleet, the Sherpa is an incredibly versatile yacht available in two options, open deck or salon deck. Characteristic of the Sherpa is her short foredeck and an expansive 41 meter cockpit area. The first hull of this vessel was built with two spacious cabins but a three stateroom layout will be available on future models. A spacious 140 square foot tender garage allows you to add and array of other water activities to your yachting itinerary. Two Volvo Penta IPS 600 drives deliver a top speed of 25 knots. Crusing at 20 will burn around 26 gallons of fuel, while at the displacement pace of 12 knots the consumption goes down to around 11 gph. The yacht measures 58 feet long with its swim platform, has an 18-foot beam, and its draft is 3 feet. The Arcadia Sherpa has all the makings for the perfect mid-size sport yacht and the icing on top is her eco-logically friendly technology.