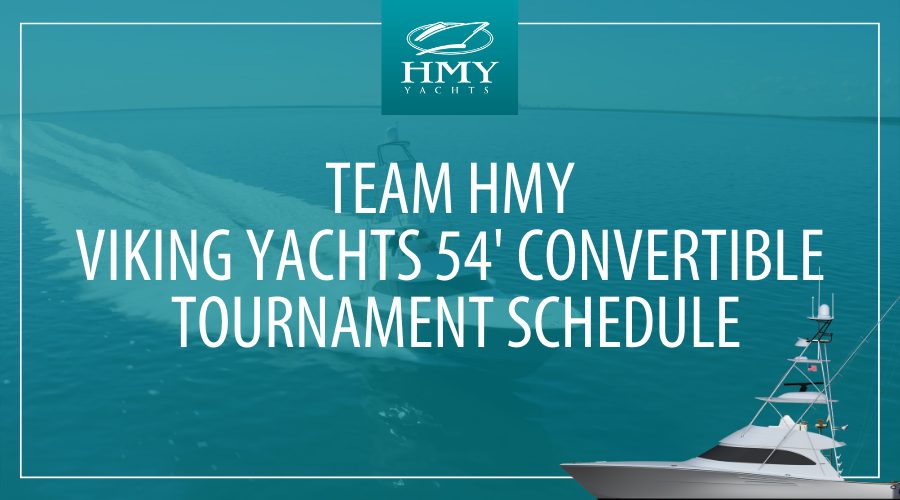 Reaffirming its dominance in the realm of mid-size convertibles, Hull #1 of the all-new Viking 54’ Convertible is getting her finishing touches and will soon be on her way to soak up the spotlight at her official debut during the 2020 Fort Lauderdale International Boat Show, which will be taking place October 28 through November 1.

Following the show, Hull #1’s fish raising prowess will be on full display as she heads into battle for her first tournament of the season representing Team HMY in South Florida’s tournament circuit. She will make her tournament debut in the waters near Miami Beach, FL November 19-21 during the Miami Billfish Tournament of Champions. Captain Trey Claus will be behind the helm all season long getting business done.

Speaking of getting business done, the mid-size 54’s business end offers more space than any other boat in its class. Her cockpit is 154 square feet of unobstructed fighting space. The configuration of the 54’ Viking’s cockpit provides Team HMY (and future Viking 54’ owners) with the ammunition to land in the winner’s circle, starting with molded non-skid on the cockpit sole for grippy footing (even when wet) and large scuppers to drain water quickly.

The walkthrough transom door with lift gates takes the work out of boating a trophy catch, allowing Captain Trey and Team HMY to move on to raising the next fish of the day. A three-foot reach to the waterline also allows for quick releases so the team can get back to business. When things get crazy in the cockpit, Viking’s signature cockpit coamings and toekick assist in keeping anglers comfortable and well-balanced during lengthy stand-up battles, while flush rod holders, and recessed stainless-steel hawse pipes and cleats keep the cockpit clear.

Throughout the tournament season, HMY will be sharing the Viking 54’s offshore adventures on social media, and we can’t wait to show you all the action as we follow Captain Trey and Team HMY throughout the season. From the captain’s chair, there is a streamlined walk-around center console that allows for 360-degree sightlines. With a full suite of electronics, and a custom-designed and fabricated Palm Beach Towers tuna tower, the Viking 54’ is primed to chase the pelagics. With a bird’s eye view from the flybridge, we can guarantee you will find the Viking 54’ on top of the fish all season long. The flybridge along with the raised observation mezzanine in the cockpit, will allow us to share the action with you as if you had a front row seat.

Be sure to follow us on Facebook and Instagram to keep up with Captain Trey, Team HMY, and the Viking 54’ this season. Catch a glimpse of the Team HMY’s Viking 54’ Convertible and post it to social media using the hashtag #TeamHMY for a chance to be featured on our social media pages. If you’re planning on hitting South Florida’s battlegrounds as part of your tournament season, be on the look out for the Viking 54’ at these tournaments:

When she is not on the water and raising fish, the Viking 54’ will serve as a demo boat for clients interested in seeing all that the newest member of Viking’s Elite Fleet has to offer. On the inside, she boasts a three stateroom, two head layout. Thanks to the uninterrupted companionway that stretches from the starboard-side salon door all the way to the forepeak, the design of her interior makes full use of the 17’ 8” beam, accentuating her impressive size.

Contact an HMY Viking Yachts Professional for more details on this vessel or to set up an appointment to view her at the Fort Lauderdale International Boat Show: (561) 331-5200