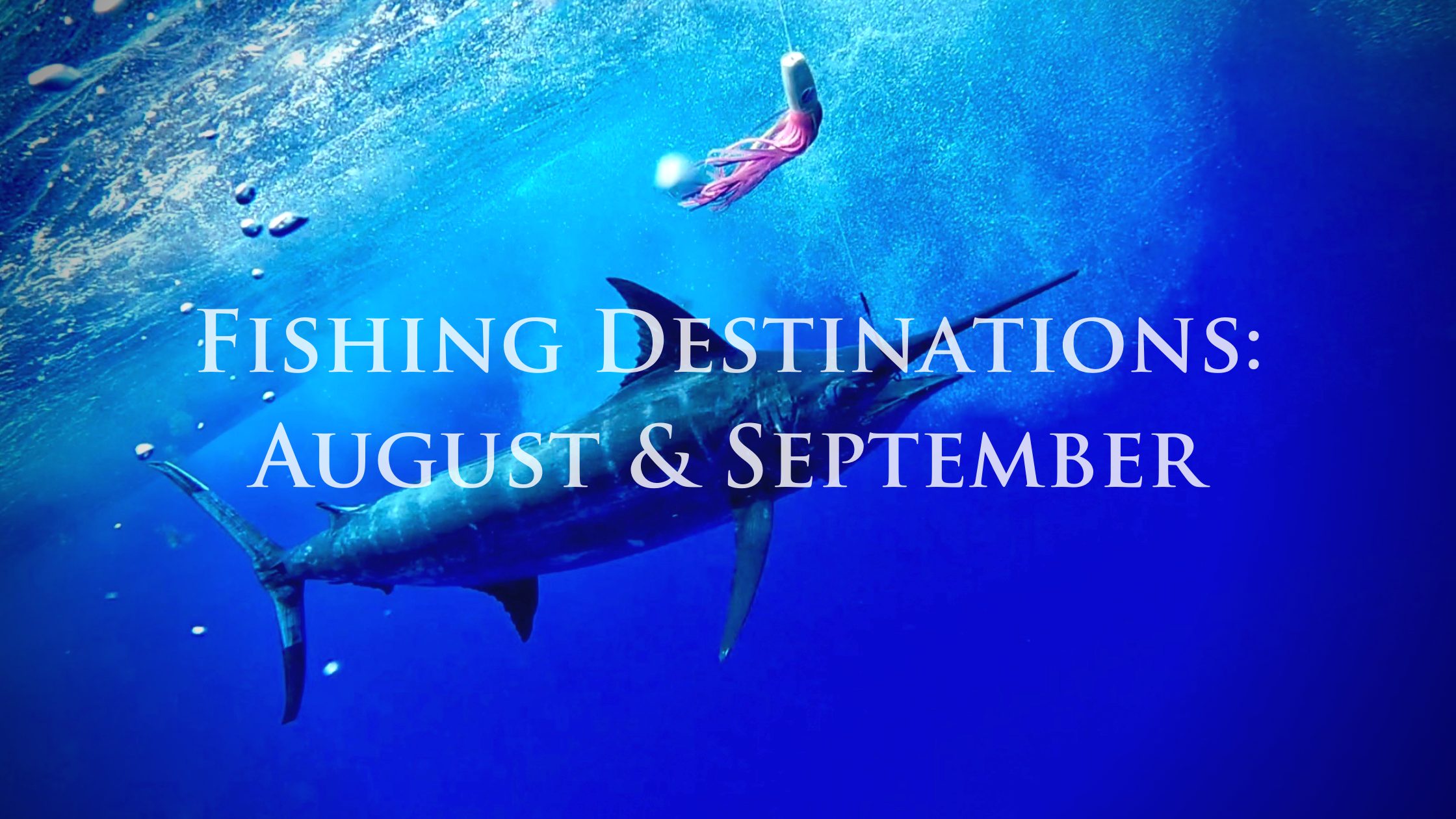 Fishing Destinations in August and September

At HMY Yacht Sales, our team is comprised of a variety of maritime professionals and a lifetime of knowledge. Our staff members have traveled and fished destinations that most people could only dream about. We sat down with four sales professionals at HMY that also double as anglers and or captains offshore. We shared a few fish stories, a few laughs, a few heartfelt memories, and a few hot fishing destinations on the radar for the months of August and September.

If you are looking for a fishing destination for the next two months, you are in luck!

During the months of August and September, the annual billfish migration is taking place on the East Coast of the United States. Anglers can hope to catch white marlin, blue marlin, and see a large number of tunas in the Mid-Atlantic region during this time of year. Komer recommends fishing the canyons out of Ocean City, Maryland, and Cape May, New Jersey. “It’s not uncommon to see boats having double-digit days in Cape May and Ocean City. Boats can have 30-40 white marlin releases during overnight trips with a few blue marlins mixed in!", Says Komer.

He also recommended the Dominican Republic and St. Thomas as hot spots for both blue and white marlin this time of year.

However, Komer states that the Mid-Atlantic region will always be his favorite during the summer. “Just looking down the docks this time of year, the docks are packed. There’s nothing like it.”

Komer explained that “One real memorable story in the Mid-Atlantic region, was fishing the White Marlin Invitational, in Beach Haven. We fished and won the Treasure Chest, with all qualifying marlins and tunas. We weighed two white marlins, won the release division, and the tunas, to win it all.”

Costa Rica is Pat Kelly’s preferred fishing destination during the late summer season. Kelly has fished all over and is originally from Ocean City Maryland, but with Costa Rica’s unparalleled great weather and a short run offshore (15-30 miles), it’s hard for Pat Kelly to pick another top location. In Costa Rica Kelly typically fishes the FADs and targets a specific area.

Kelly just returned from an overnight fishing trip at the FADs. The crew saw 35 blue marlins, had 29 bites and caught 24 blue marlins in two days of fishing. “If blue marlin fishing is your thing, Costa Rica is the place to be, July through the beginning of October!”

Some of Pat’s most memorable stories in Costa Rica include fishing with his daughters and longtime friend, Frank Bongiorno on board “Dealers Choice” the Viking 58’. The flat calm weather and great fishing allow Pat to spend time with his girls and says, “it’s a great family event.” Pat often fishes with Frank Bongiorno, who has become a great friend over the years as they both represent companies that sell Viking Yachts.

Rob agrees with many of our staff members that his personal favorite location to fish during this time of year, would have to be the Northeast canyons in the Mid-Atlantic region for white marlin and blue marlin. “The Northeast will provide multiple shots at the white marlin, with a mix of a few blue marlin and tunas being prominent.” Even though billfish are prominent, Rob said he “enjoys the tuna fishing this time of year, with the opportunity of catching a few large bluefins during the late summer.”

“One of the things that a lot of people don’t take advantage of, is the Wahoo fishing off the Bahamas during August and September around the full moons. The weather is typically calmer and there tends to be less pressure on the fish this time of year.” Rob recommends wahoo fishing anytime five days prior to the full moon and anytime within five days after the full moon. “This is a great option for boat owners living in South Florida and that have access to the Bahamas,” says Spano.

On a recent trip to Cape May, New Jersey, Rob was able to fish with a client offshore. They released a handful of white marlins, with a few shots at the blue marlins, and a dolphin. Rob’s client had been up at the Viking Yachts factory to build a sportfish and after experiencing the bite in Cape May, he is looking forward to his future sportfish build.

Gredick’s top picks all stem around fishing the annual billfish migration on the East Coast of the United States, ranging from North Carolina, up to the Northeast. All of Gredick’s picks are great areas for fishing for white marlin, blue marlin, and yellowfin tuna.

“The Northeast canyons are unique. There is so much structure here, there are upwellings and bait, and so much life in this region. You can catch billfish, bigeyes, and yellowfin. There are not many places like it.”

Some of Gredick’s most memorable days offshore in this Mid-Atlantic Region were with his clients. On one occasion, Jamie Ramero owner of "Absolute Pleasure” invited the past owner Jim Shannon to fish.

"Jim's Capt Wayne Skinner and I got to fish on his old boat in MD. We released 8 white marlins and caught 12 yellowfin tunas. Wayne Skinner was a captain for 30 years. He caught his very first white marlin that day. He was always driving up in the flybridge of the boat, so it was pretty cool to see someone get to catch their first white marlin after years of putting other people on their first billfish. Both Jim and Wayne have since passed away, I feel lucky to have spent that day on the water with them."

Gredick said, “it’s been special to have the opportunity to fish with a lot of my customers. Each memory is unique to each customer, and that’s something you don’t forget.”

We’ve covered fishing destinations up and down the East Coast of the United States, to the Bahamas, and to Costa Rica. Regardless of where these next two months take you and your crew, we wish everyone tight lines and safe travels during all of your fishing endeavors in August and September.

If you’re looking for a sportfish or high-end center console for your future fishing, we can help there too.

Click here to view yachts for sale with HMY.