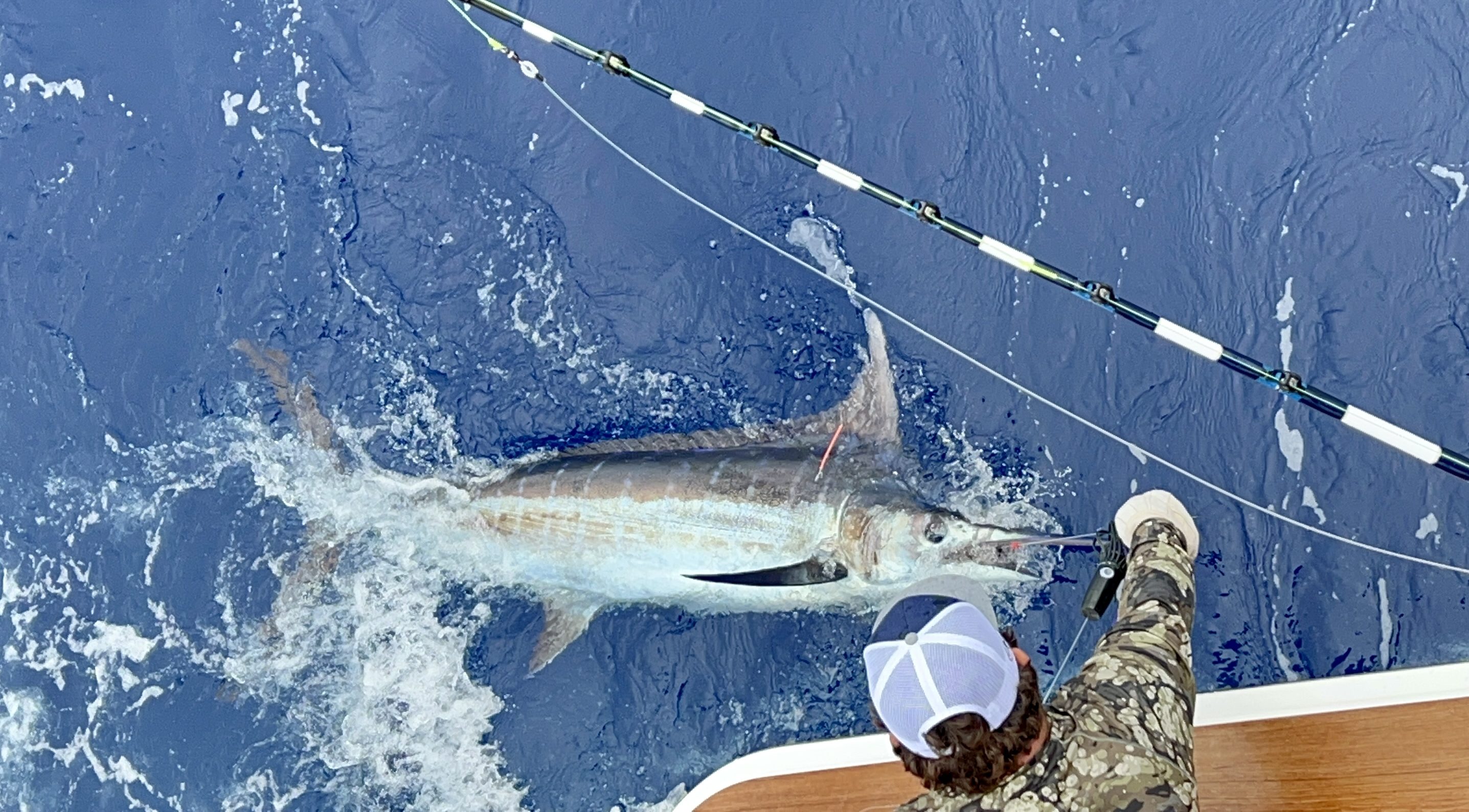 First Blue in Bermuda onboard the Viking 80′ Demo

Our Yacht Sales Professional, Tim Gredick, had the opportunity to fish aboard the Viking 80’ Demo in Bermuda with his son, Will Gredick, at the end of June for three days. After a once in a lifetime trip for the father and son duo, Tim gave us the full recap below. 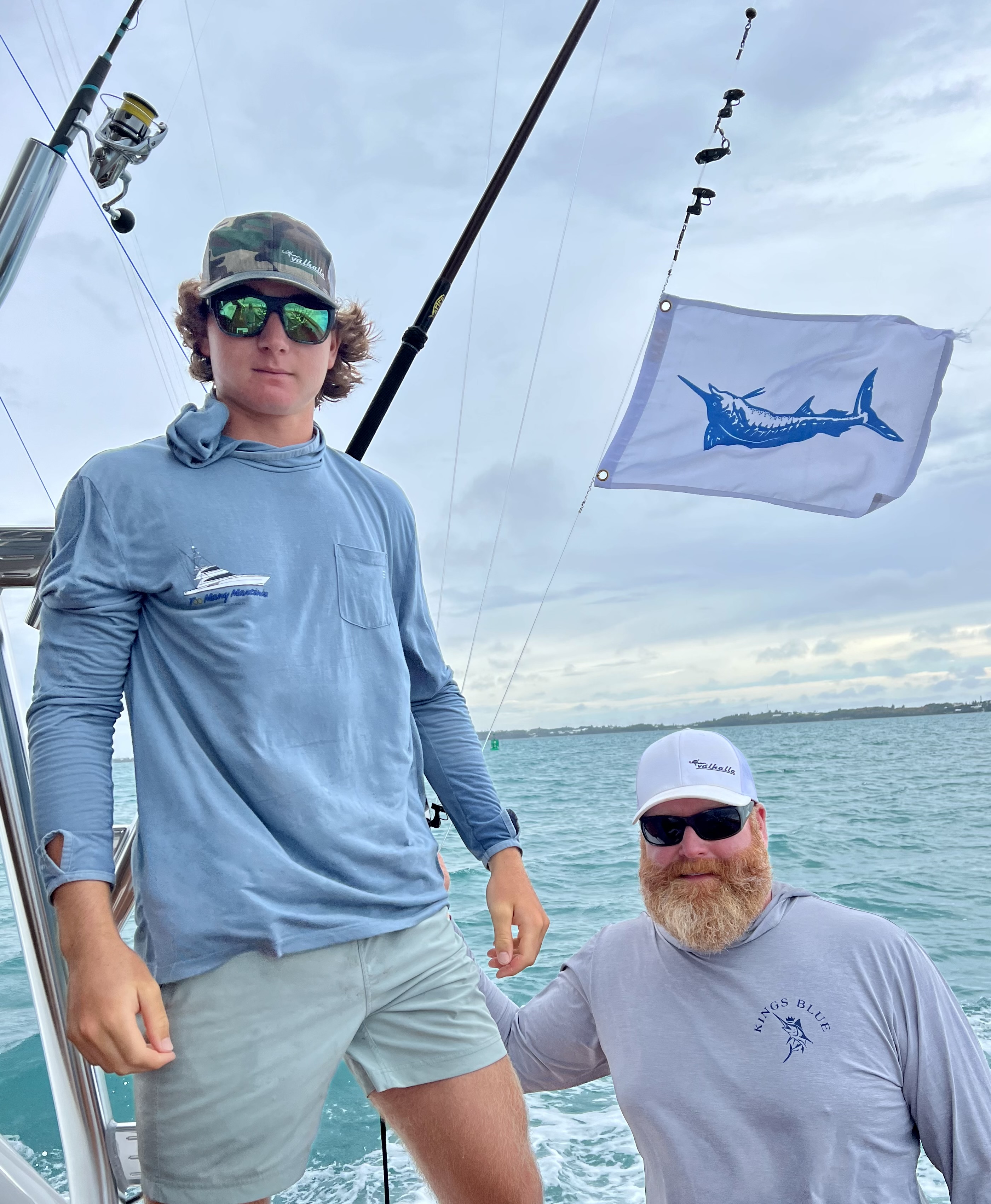 “Will Gredick has been chasing after his first blue marlin since the age of ten, with multiple close calls and many times when his father was designated to take the rod on blue marlins in tournaments. The culmination of his five-year quest could not have been more storybook than fishing the first day in Bermuda on the Viking Demo 80 Convertible alongside friends Captain Sean Dooley, and mates West Rivers, Thomas Garmany, and Byrd Miller.

On the first day, we left the PW Marina in Hamilton at 7:30 in the morning. Captain Dooley carved through the coral-lined maze of hogfish cut to open water and headed towards our destination -- Argus Bank. The ocean was alive with busting tunas, longtails, and other birds all over. Everyone onboard felt excited for the day. But it was most evident on Will's face as we sized him up for the bucket in the chair, knowing that the next knockdown could be a monster. Our first bite was a nice blue marlin which ran off the line a few hundred yards and jumped off. Will saw his first chance of catching a blue pass him by in a flash. We could all see his disappointment, but he quickly turned it around and continued to watch the lines intensely. 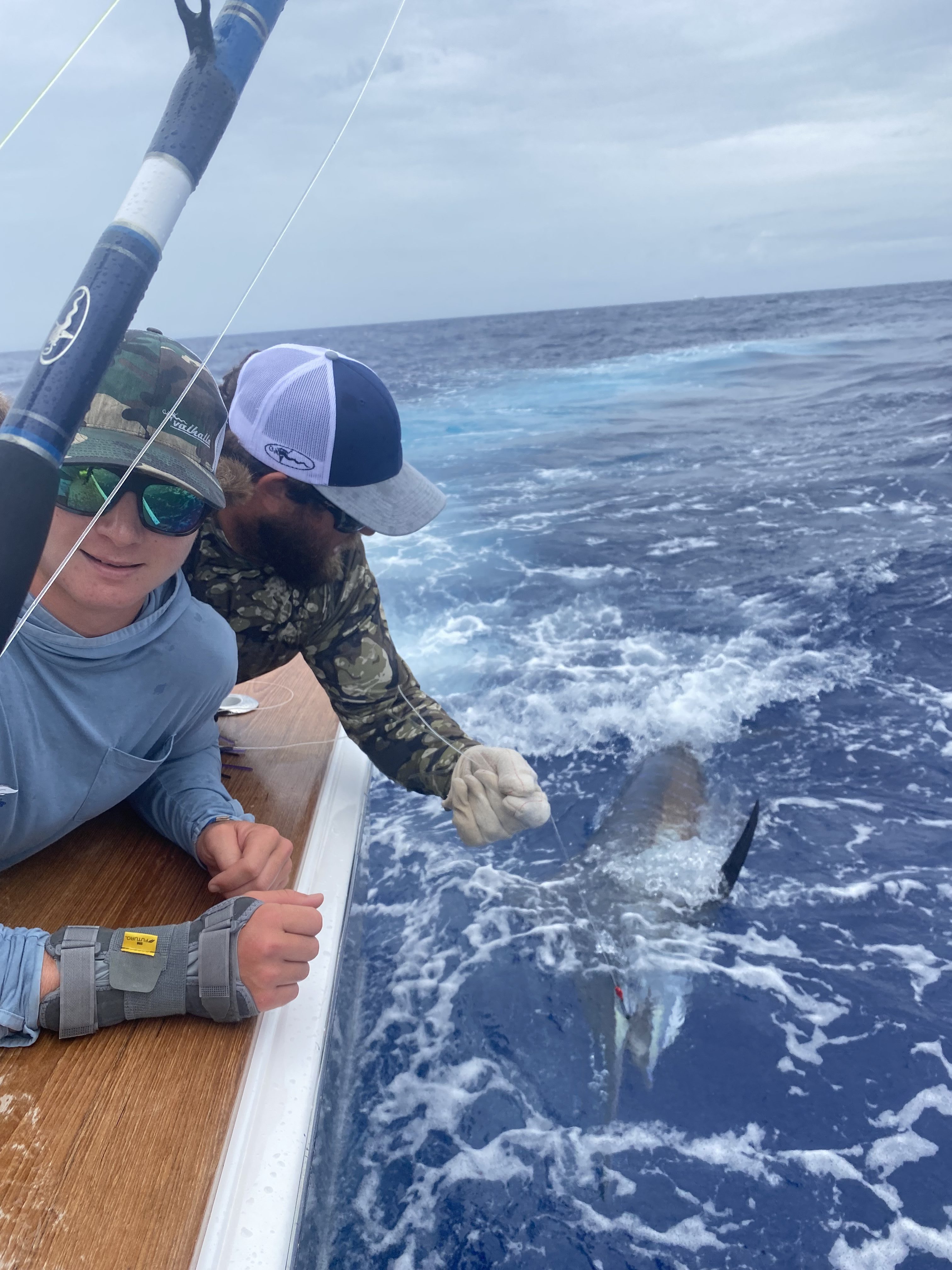 Another two hours of trolling had passed when the black and blue Mold Craft wide range on the long rigger popped out of the rigger with a huge splash. Suddenly a blue marlin started jumping all over the ocean. Will jumped into the chair and the fight was on! After 10 minutes, Thomas Garmany was able to grab a leader and make the catch official as West Rivers tagged and released the blue marlin back to the ocean.

Later that day, the same long rigger went down and Will jumped into the chair again. His second time in the chair and he was beginning to get his form down with the bucket harness. The line on the 80W was down to the start of the backing and we all knew this was a larger fish. After several minutes, the fish settled in straight down. Thomas was convinced we had a tuna while the rest of us were still thinking it was a foul-hooked blue marlin. To our surprise, when she came to the surface, we needed two gaffs to boat a huge yellowfin tuna -- an Allison with large sickles. 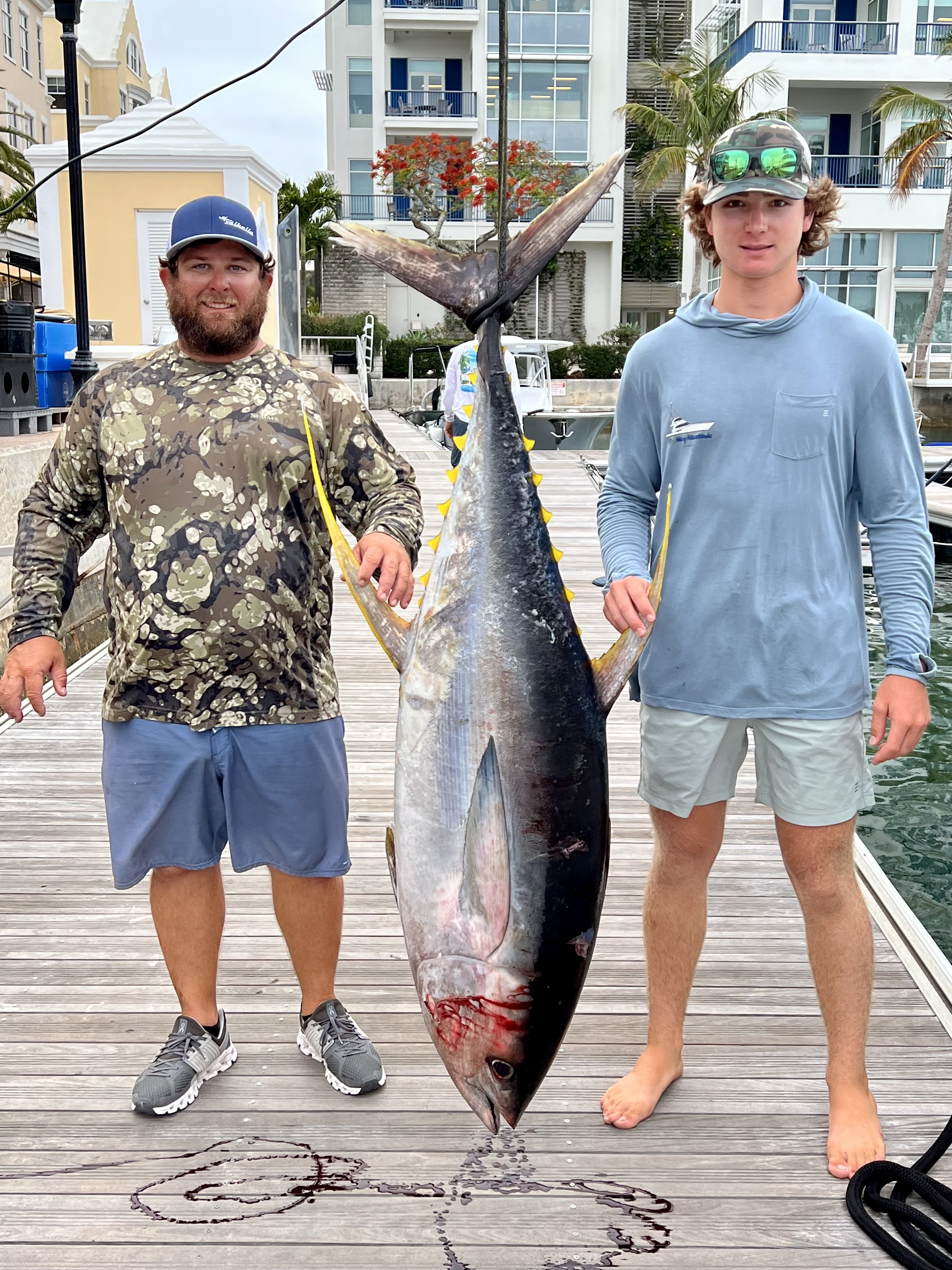 Our crew, all South Carolina fisherman, had never caught a yellowfin of that size. We all made guesses on the weight of anywhere from 140-180 pounds. Some of us got caught up in the moment and were wishfully adding 20-30 pounds to our guesses. After we returned to the docks, we raised her on a dock-mate’s davit and she weighed in at 130lbs. Not a bad day of fishing for a 15-year-old!

We fished two more days as the Viking demo crew was sharpening their skills, pre-fishing for the Billfish Blast that kicked off a few days later. On day 2, Will released a larger blue marlin and another yellowfin tuna which weighed 150 pounds. On day 3, we missed 2 blues, released two whites, and took home 2 nice wahoo that made for a great sashimi for dinner.

It was an incredible week of fishing on the 80 Viking Demo. A big THANK YOU to Pat Healey and the Viking Team for creating truly unforgettable memories!” 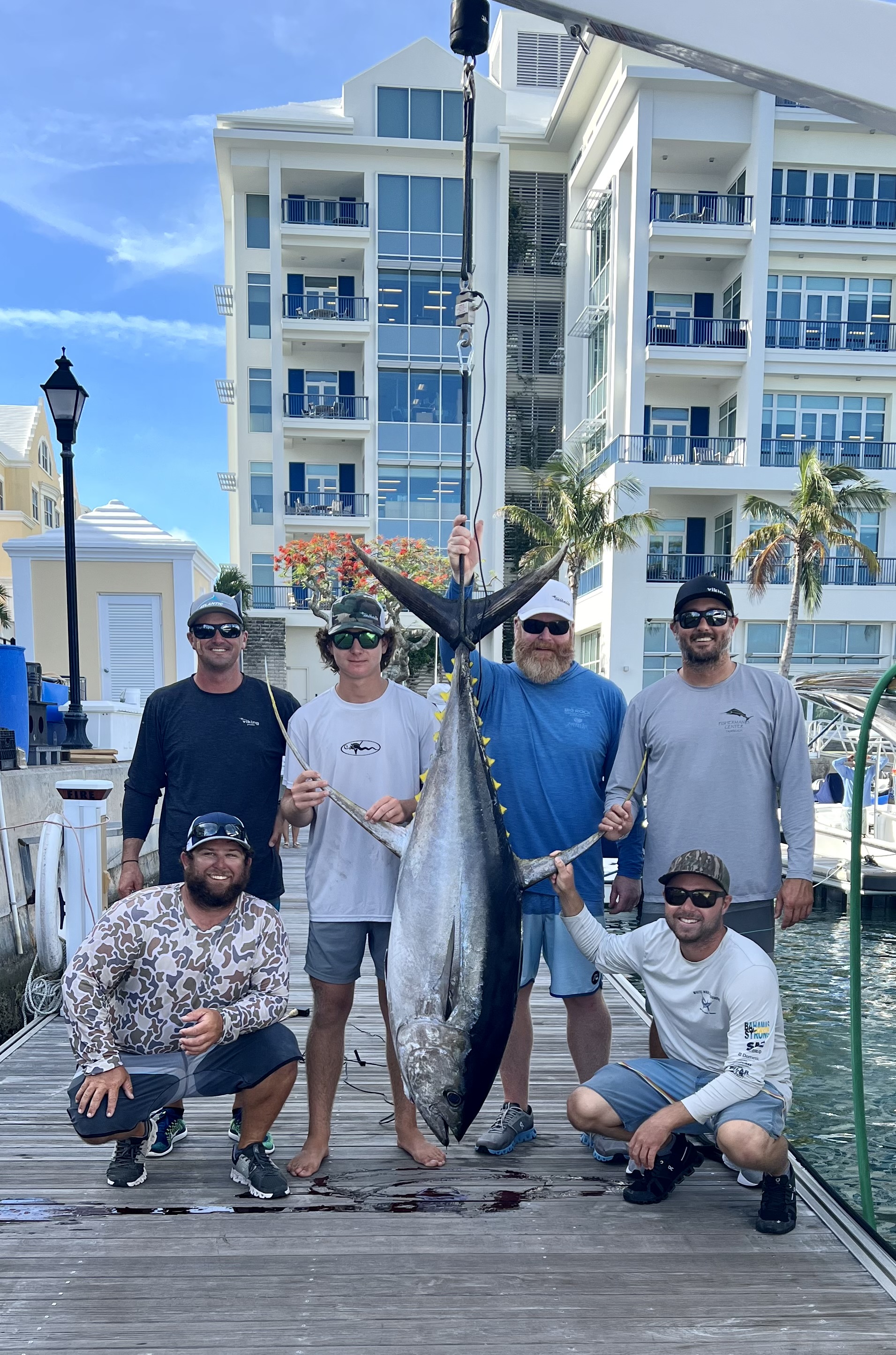 If you have any questions about the Viking Product, fishing, or boat sales contact Tim Gredick at (843) 607-7256 or tgredick@hmy.com.