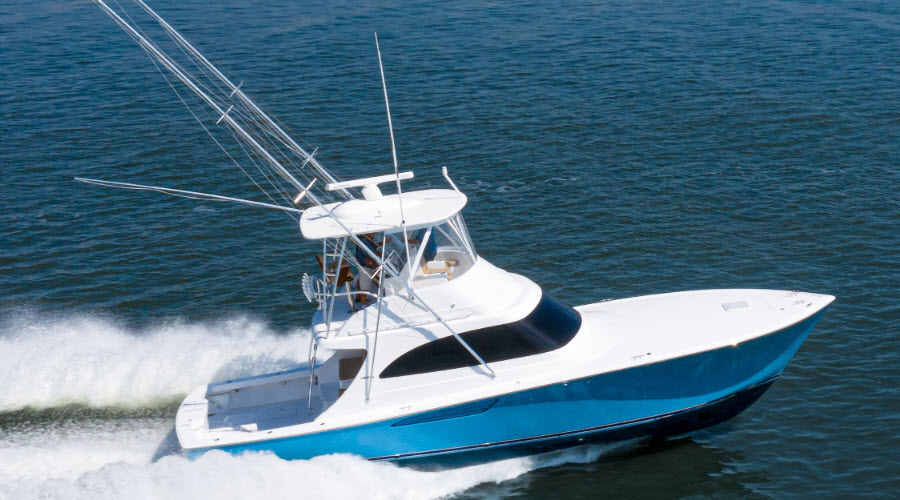 The Viking 46 Billfish evokes the classic day-boat charter designs of 1960s-era South Florida builders. Her story begins back in 2008 when Ocean Yachts introduced the original 37 Billfish, a back-to-basics sportfishing boat with an open-plan layout marked by the absence of a cabin bulkhead. Quickly becoming a popular model with anglers, Viking acquired the molds for the 37 in 2015 when it purchased the former Ocean Yachts facility in Mullica, New Jersey. Completely restyled and sporting a new wraparound windshield, the reintroduced Viking 37 came out in 2018 and became an immediate success with 24 sold in less than two years. It was clear that Viking had a winner on its hands.

Building on the 37’s success, the new Viking 38 Billfish was unveiled at the 2019 Miami Boat Show followed in September by the introduction of the new Viking 46 Billfish. True to her heritage, the 46 retains the day boat layout and distinctive lines of her predecessors. Lighter, faster and more fuel efficient than larger Viking convertibles, the 46 Billfish is a ready-to-go fishing machine for tournament-level missions.

The layout of the 46 Billfish will appeal to anglers who appreciate the advantages of an open deck plan with no cabin bulkhead. Instead of a salon, the Billfish offers a weather-protected deckhouse with lounge seating for the whole crew — the kind of easy-access layout that keeps everyone outside and close to the action. Both port and starboard seating areas have rod stowage under and the entire command deck can be enclosed and climate controlled. Above, the tournament flybridge is designed with a center console walkaround helm equipped with Palm Beach-style controls.

For a dedicated fishing boat, the cabin accommodations of the 46 Billfish are as practical as they are inviting. The roomy bridgedeck has facing lounge seats for guests with an adjustable hi-low table to port. Below, the galley is conveniently positioned at the foot of the companionway steps where it’s easily accessed from the cockpit and bridgedeck areas. A large head compartment with a walk-in shower is opposite to port, and immediately forward of that are adult-size over/under berths. The private bow stateroom has an island double berth and large hanging locker. With high-gloss teak cabinetry and custom Amtico flooring throughout, the upscale interior of the 46 Billfish reflects the meticulous fit and finish common to Viking’s larger convertibles.

The 140-square-foot cockpit of the 46 Billfish is an anglers dream. The cockpit sole is built with a laminated mounting plate for fighting chair or table installations. Standard features include a cockpit bait freezer, in-deck insulated fish boxes port and starboard, walk-through transom door and lift gate and transom fish box and live well. Two-person, mezzanine-style seats flank the centerline walkthrough and there’s refrigerated drink storage in the starboard mezzanine step.

Powered with optional 800hp MAN diesels, the 46 Billfish will cruise at 32–24 knots and reach a top speed of close to 40 knots — impressive numbers for relatively small engines.