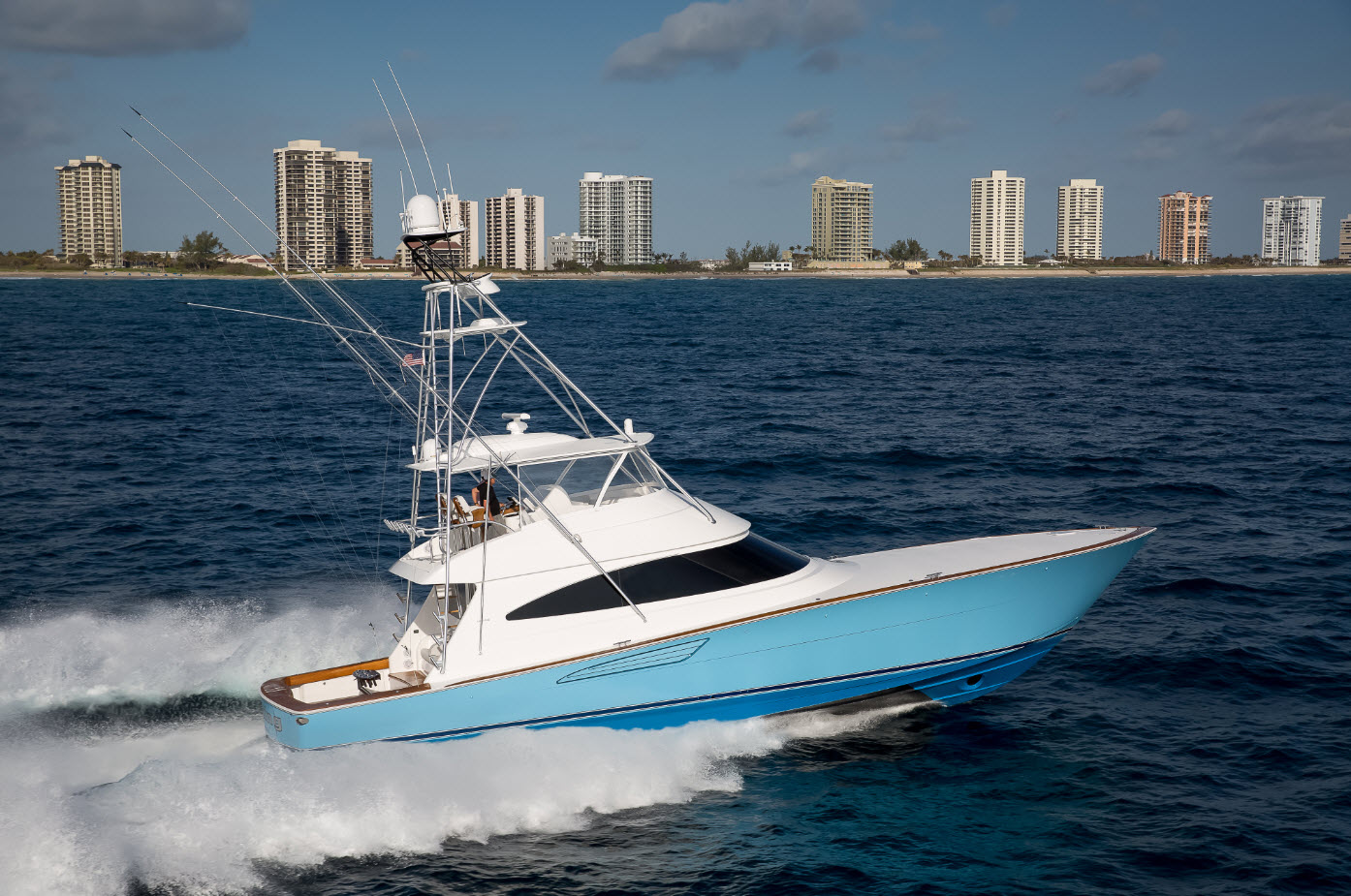 “This boat is going to be a big hit,” says Viking Design Manager David Wilson. “We were able to bring some of the attributes of our larger models to the 68 while maintaining the efficiencies of a smaller sportfishing boat.”

The Viking 68 C has captured the attention of Viking enthusiasts and fishing fanatics worldwide, and it's no secret considering her bombshell profile.

She pushes to a 40-plus-knot top end with the optional 1945-hp MTU Series 2000 V12 M96L diesels, sitting her at a powerful yet efficient 35-knot cruise. 2,423 gallon fuel capacity serves an extensive range. 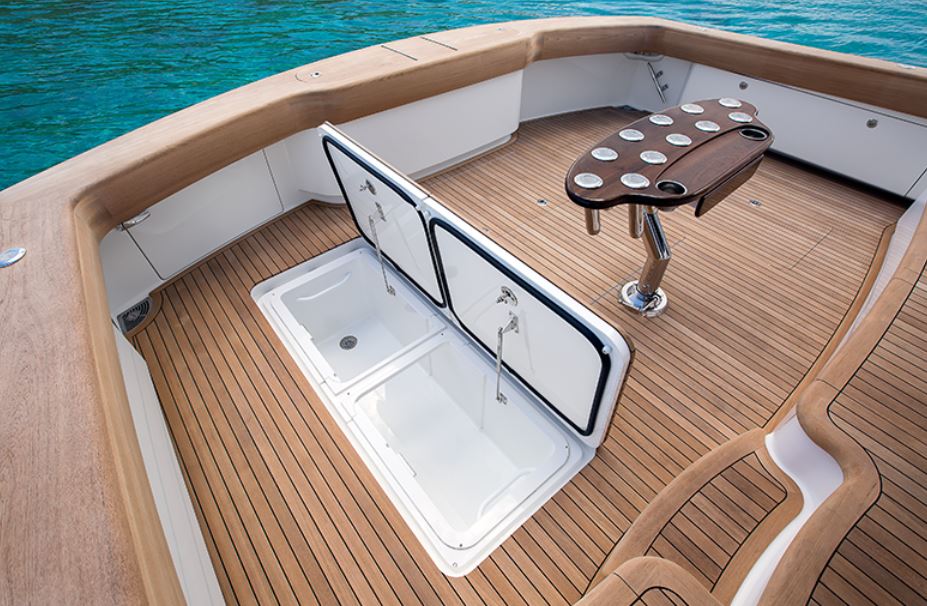 The large in-deck fishwell with a macerator pump discharge in the 176 sq. ft. cockpit is supplemented by fresh and saltwater washdown systems, a refrigerated chill box in the salon entrance step so you can stay close to the action throughout the day, a walk-through transom door with lift gate, a molded nonslip fiberglass sole with aluminum plate reinforcement for fighting chair placement, flush rod holders, tackle and gaff stowage, and an optional circulating livewell and dunnage box. 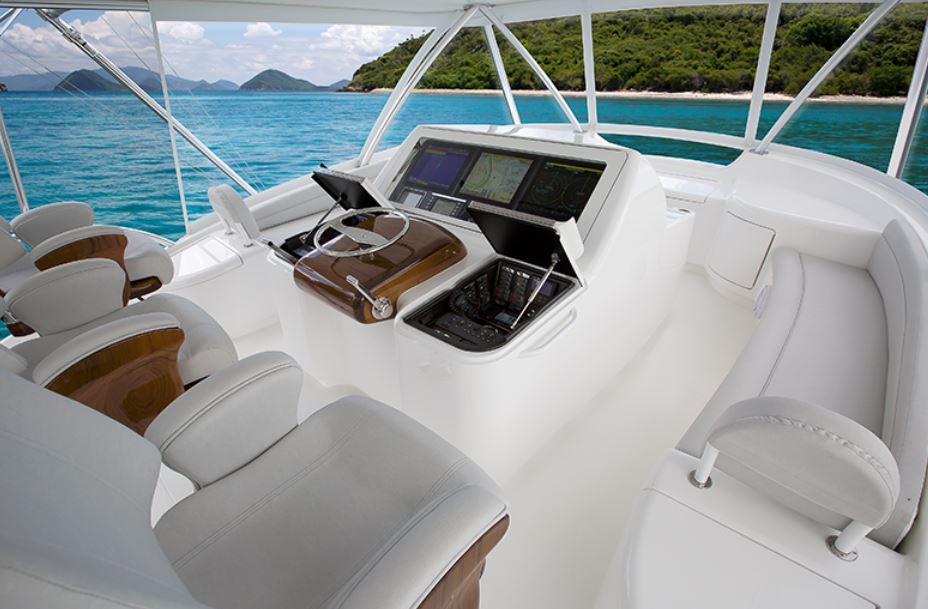 360-degree visibility from Viking's flybridge center console walk-around helm gives the captain full wraparound views, while the flanking companion seats are joined by port and starboard lounges and a seat forward of the console. Store an abundance of food, bait, or drinks in the forward top-loading freezer.

While the flybridge is a tournament fishermen favorite, a climate controlled enclosed bridge with a spiral staircase from the salon also is available, a popular plan with cruising yachtsmen. In addition to providing comfort and convenience, the enclosed bridge serves a second salon and private retreat.

Viking's latest four-stateroom bluewater battle-wagon, the 68 Convertible, stands out as yet another industry-leading sportfish boatbuilding milestone from bow to stern. Many years of fishing experience have contributed to the expert design of our tournament-winning cockpits. Rounded coaming bottoms for comfort, perimeter toekick for balance and an aluminum backing plate laminated in the cockpit sole for a fighting chair or rocket launcher are all part of the Viking sportfishing DNA.

The 68 Convertible was specifically designed for the installation of a Seakeeper gyro stabilizer, which brings a level of stability to the boat that ultimately improves overall fishing capabilities.

From the electrically operated salon door to the HD TV to the day head to the galley's engineered-stone countertops, the 68 Convertible flows with luxury conveniences and amenities that one would expect for comfortable onboard livability. Multiple gathering areas will have you relaxing in no time. Opposite the galley, a large dinette easily accommodates four adults for dinner and additional bar-stool seating is available at the island galley counter.

Open to the salon and dinette, the 68 C's walk-around island galley maximizes space while serving as a prime socializing area that's loaded with modern conveniences, including Sub-Zero under-counter refrigeration and pull-out drawers on aircraft-type slide mechanisms that lock in place for safe keeping.

The midship master stateroom has all you need for comfortable multi-day excursions - a queen-size walkaround bed, two hanging lockers, a pair of credenzas, storage under the bed and end tables and a full-size private head with separate shower.

And she's off! The brand-new Viking Yachts 68' Convertible, which will be used as Viking's winter demo boat, was put through her paces earlier this month, running strong through the Palm Beach Inlet. This video was captured as the boat was headed in after fishing in the Sailfish Club of Florida's annual Gold Cup.

Each year Viking designates three new demonstrator boats by season- one in the winter and two in the summer. This ensures hands-on experience that leads to innovation in all aspects of boat design, from performance and handling, to fishing features to interior accommodations and overall comfort. Building boats - and then applying them to the real world - is the formula that has fueled Viking excellence for over five decades.

Consistently running, fishing and maintaining the demo boats allows Viking to showcase their products in the environment in which they were born to perform. The Viking 68 and Viking 72 will be appointed as demonstration boats this summer. "Each demo boat is an engineering tool, a design tool, a marketing and sales tool, and a customer service tool," says Ryan Higgins, Viking Southeast Sales Manager and Demonstrator Program Manager. "With our demos, we can show a level of commitment to our customers that you'll only find with Viking."

She may have only been announced in early November at the Fort Lauderdale International Boat Show but the new Viking 68 C has already emerged from the New Gretna, New Jersey, manufacturing plant, showing off her stellar Shimmering Blue hull. She is ready to prove once again that Viking is the leader in sportfish boatbuilding, worldwide.

Viking's incredible 70-ton Travelift carried the 115,306-pound, four-stateroom yacht to their make-ready dock where she is now being prepared for her upcoming sea trials. Hull number one of the 68 C is powered with twin optional 1945-hp MTU Series 2000 V12 M96Ls.

Above, Finish Mechanic Foreman Tom Harris directs the Travelift into position so the 68 C can be lowered nice and easy into the basin. The photo perfectly demonstrates the 68 Convertible's sharp entry, variable deadrise and bow flare, which are just a few of the design traits that give the boat that signature dry, stable and smooth ride that Viking yachts are so well-known for.

This idyllic sunset snapshot captures the 68 C settling in for her frst night on the water. Her lines are absoutely beautiful, a profile that is as bold as it is elegant. You can catch your first in-person glimpse of the latest Viking convertible at the invitational 22nd Annual VIP Boat Show Preview at the Viking Yacht Service Center in Riviera Beach February 2 - 3.

For decades, Viking Yachts has been leading the pack when it comes to the design and development of the enclosed bridge sportfish, and the latest example of their dominance in this arena is the perfect compliment to their recently announced 68 Convertible, the new 68 EB.

Enclosed bridge boats are highly-prized for being able to shelter their guests comfortably from the elements in the climate-controlled command center and both Captains and owners can appreciate this quality. The wraparound windshield provides excellent visibility in all directions. Plus, Viking enclosed bridges (the 72 EB is shown below) are always designed with a luxuirous second salon in mind. The enclosed bridge option is offered with Viking's sportfishing boats from 62 to 92 feet and their 75, 82 and 93 motor yachts.

The launch Viking 68 Enclosed Bridge will follow the introduction of the Viking 68 Convertible, an open bridge model flaunting the Shimmering Blue hull that will make her world premiere at the Miami Yacht Show on Collins Avenue February 15 through 19. As you can see, the new 68 Convertible is making her way through the rounds of production at a steady pace and she will be done in time for the Viking VIP Preview Event February 2 - 3 at the Viking Service Center in Riviera Beach, FL.

Both the open and enclosed bridge models of Viking's 68 Convertible share the same four-stateroom, four-head layout. You'll notice that the crew quarters are discretely located, accessed by a separate set of steps off the companionway.

The Viking Yacht Company continues to prove that they are a force to be reckoned with in the high-end sportfishing yacht industry with the announcement of the 68 Convertible, a four-stateroom blue-water convertible with unparalleled performance, solid construction, luxurious interior accommodations and cutting-edge propulsion and boat control technologies. With an aggressively raked stem, gently sloping sheer, swept-back black-masked windshield and flying bridge brow the 68 C clearly presents herself as a powerful, yet elegant sportfish poised to make a splash.

As a true dual-purpose vessel, the 68 Convertible is designed and engineered to function equally as well as a tournament-ready offshore runner and a luxury cruising yacht. Anglers go to battle in a roomy 176-square-foot cockpit, while guests can watch comfortably from an air-conditioned observation mezzanine. The boat is strategically built to allow for the installation of a Seakeeper gyro stabilizer, which helps to deliver extra comfort during both fishing and cruising activities. Up on the flybridge is the open bridge helm station featuring three helm chairs, a full-suite of electronics and navigational equipment as well as two flanking lounges and a seat forward. With a layout that puts the companionway to port, the starboard master stateroom is just about the full beam of the boat. The crew quarters are discretely located, accessed via a separate set of steps off the companionway.

During the announcement of the new boat at the 58th Annual Fort Lauderdale International Boat Show, Viking President and CEO Patrick Healey said "The 68 is another legendary boat in a long line of fishing boats for Viking in the 60-foot and 70-foot range. No one is doing the job we are doing today in this size range. We're just crushing it." Crushing it they are. At the show, the company premiered several other buzzworthy new additions to the elite fleet including the Viking 44 Open and the Viking 93 Motor Yacht - the talk of FLIBS 2017.

A high-gloss walnut finish is found throughout the entire interior of the Viking 68 C, and the salon is the perfect example of intelligent form and function as it makes the most of the 19 ft. 2 in. of beam. Once completed, astounding levels of comfort will beckon guests to relax indoors beginning with a large L-shaped sofa accompanied by a coffee table in the salon and an entertainment center with flatscreen TV. Also found in the salon is a head for convenient day use. Forward of the salon is the fully-equipped galley with everything needed for preparing meals including state-of-the-art appliances and plenty of storage spaces. A large dinette is located next to the galley.

While the 68 C is still receiving finishing touches in the final stages of production, all signs strongly suggest she will be another legendary boat to proudly join the ranks of the prestigious Viking Yachts line-up. The Viking 68 Convertible will be shown at the boatbuilder's exclusive 22nd Annual VIP Boat Show Preview, running February 2-3, 2018, at the Viking Yacht Service Center in Riviera Beach, Florida. She then goes on to make her world debut at the Miami Yacht Show on Collins Avenue February 15 through 19. For more information on the Viking 68 Convertible, contact us today.