Viking Offers Options With the 48 Convertible, Open, and Sport Tower

When the Viking Yachts 48 Convertible first debuted at the 2016 Miami Boat Show, Viking President Pat Healey announced that two new versions of the 48 would be available to discerning buyers in the coming months. The wait will be over this November at the 2016 Fort Lauderdale Boat Show when Viking and HMY Yachts will unveil the 48 Open and the 48 Sport Tower. For those that follow Viking closely, this is exactly what happened with the evolution of the 42 Convertible and the 52 Convertible, which both produced the popular Sport Tower and Open models for each boat respectively. For a look back at our video review of the 48 Convertible with Randy Vance from Marlin Magazine, visit https://www.hmy.com/article/Video-Tour-of-the-New-Viking-48-Convertible-with-Marlin-Magazine/108

Peter Frederiksen, Director of Communications for Viking Yachts, had a lot to say about the enthusiasm surrounding the new 48's at the upcoming boat show, "The Viking 48 - no matter what version - is really the perfect boat for the owner/operator who enjoys spending his or her time behind the wheel. These are easy boats to take care of and especially to dock. Every 48 is prepped at the factory for the addition of a Seakeeper which makes it very easy on the owner should a gyro be added." Peter discussed the differences between the 48's as purely an "exterior decision as opposed to an interior one."

The new Viking 48 Open sports sleek lines and a one-piece wrap-around fiberglass windshield that produces the look of a sexy express cruiser with classic Viking style. Peter described the 48 Open as, "the best choice for the owner that doesn't want to be isolated up on the bridge." Once outfitted with a fiberglass hardtop and a custom tuna tower and outriggers from Palm Beach Towers, there is no better looking sportfish in the marina or fishing the tournament. Except maybe her sister, the 48 Sport Tower. For the owner that wants an escape from the elements, the Viking 48 Sport Tower has all the advantages of the 48 Open and boasts a three-sided fiberglass air conditioned deckhouse for fishing or cruising in inclement weather.

Each of the three model versions - The 48 Convertible, 48 Open, and 48 Sport Tower - feature similar cockpits that have grown in size to 124-square feet of usable space. This is an improvement from the 46 Convertible which now gives the Viking 48 a dedicated space in the sole for a Seakeeper 9 gyro stabilizer.

The command deck layouts are also identical for the 48 Open and Sport Tower versions which feature the helm forward with three pedestal seats, plus two spacious L-shape lounges and dinette tables aft. Their cockpits are identical also with a split of the dual mezzanine seating and include numerous fishing and cruising features. Having the helm in the center gives the captain excellent sightlines and their maneuverability is second-to-none with power-assisted hydraulic steering, single-lever electronic engine controls, and of course, communication and navigation equipment supplied by Atlantic Marine Electronics. The 48 Convertible has the familiar and tournament proven flying bridge arrangement with a center console helm station, twin pedestal seats and lounge seating to port and starboard with rod stowage underneath, as well as forward seating. "The bridge on the 48 Convertible makes you feel like you are on a much larger boat with all its accommodations" says Peter.

Like all Viking Yachts, the interior of all three 48 models does not disappoint. The joinery is owner's choice of walnut and teak in either high gloss or satin finishes. And no reputable sportfish would be complete without a flat-screen television and entertainment system with surround sound. The galley and seating layout make the inside of the Viking 48 perfect for entertaining on overnight trips with family and friends. While the accommodations aboard the 48 Convertible consist of three staterooms and two heads, the 48 Open and 48 Sport Tower have a two stateroom/two head layout.

Whatever Viking 48 you choose, rest assured that each is built with the tradition of performance, craftsmanship, and reliability that all Viking Yachts possess. 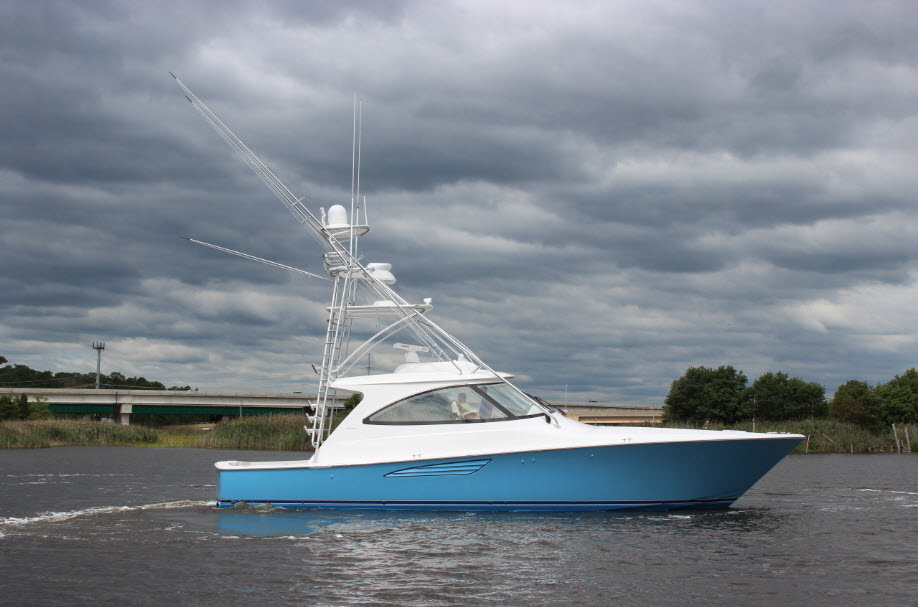 Viking 48 Sport Tower Mezzanine. There is a freezer in the mezzanine bench seat, a refrigerator in the lower mezzanine step, a drink box in the salon step and another insulated box to port with a four-drawer tackle center. 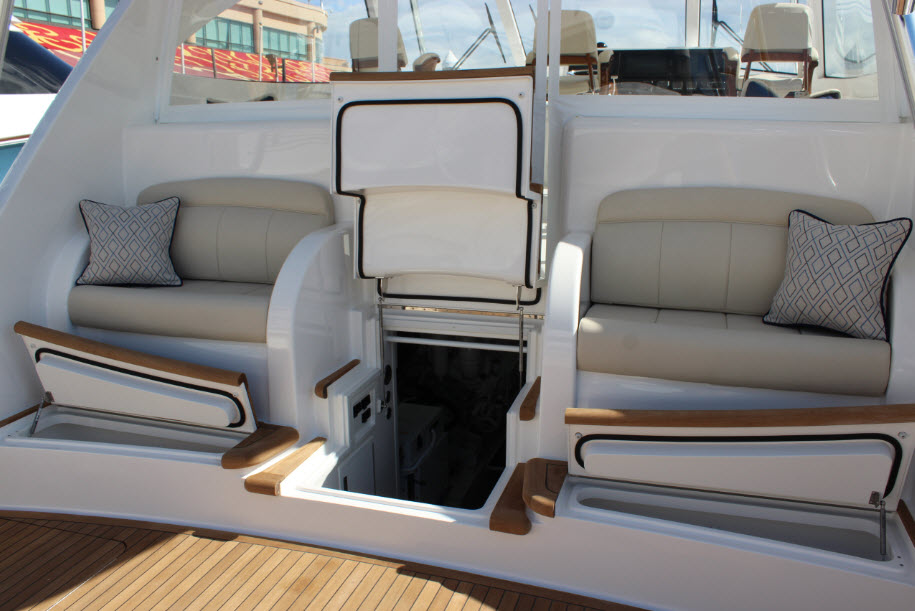 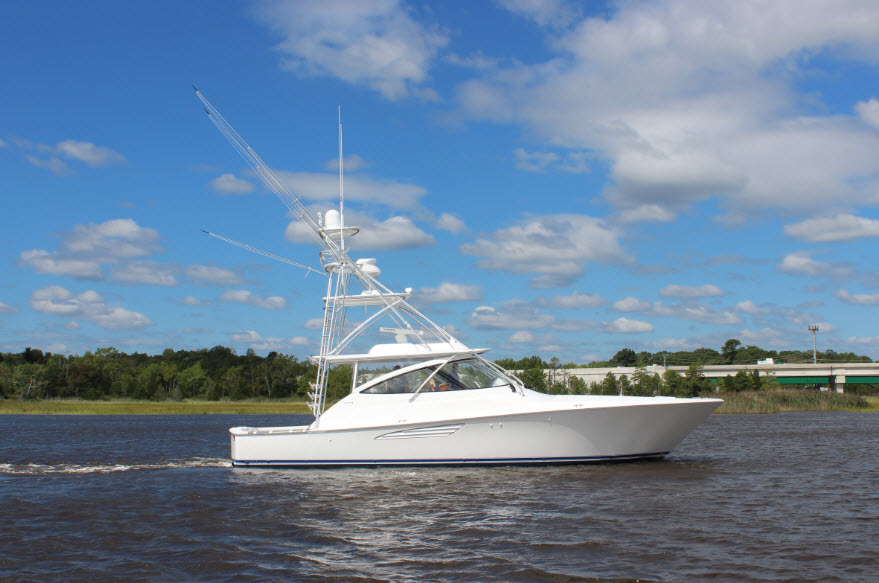 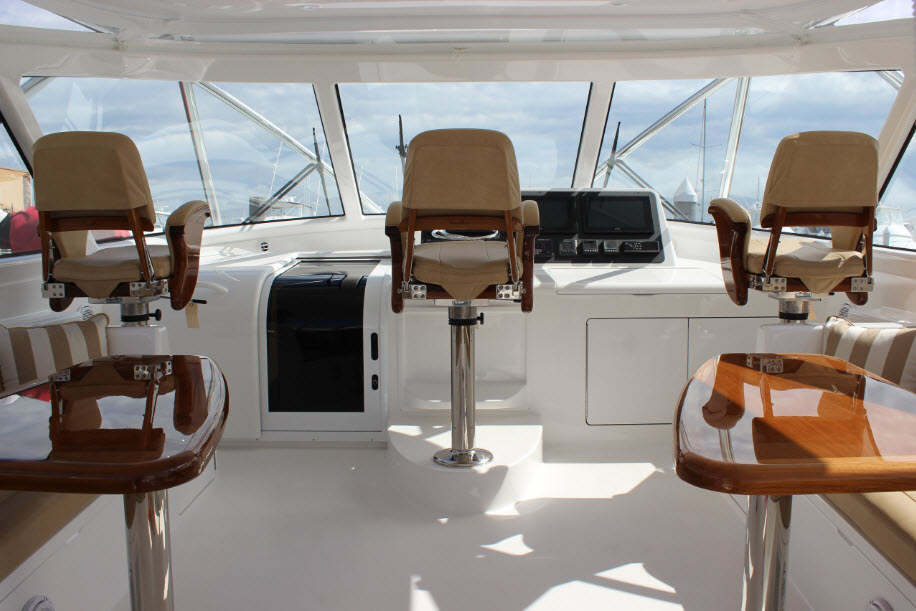 The Captain's view of the cockpit on all 3 Viking 48 models. 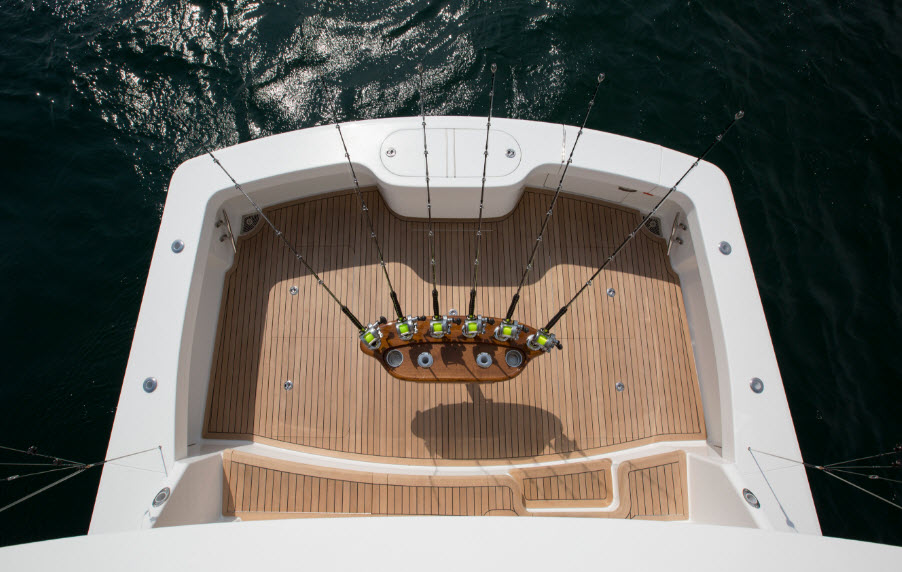 To receive more information on the Viking 48 Convertible, 48 Open, 48 Sport Tower or any other Viking Yachts model, please visit our new Viking  model page here and fill out the online form. One of our Viking Yachts specialists will be in touch with you shortly and can set an appointment with you for this year's Fort Lauderdale Boat Show.