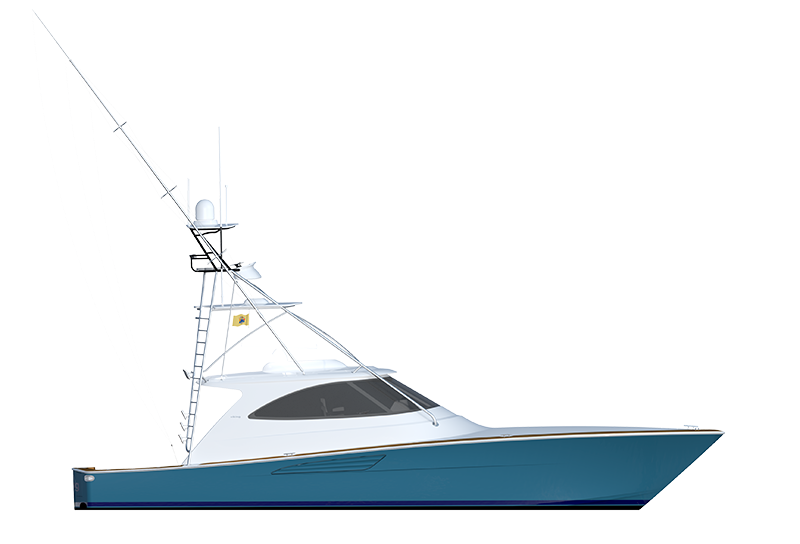 Viking recently announced the new 54 Open (O), 54 Sport Coupe (SC) and 54 Sport Tower (ST), which join the award-winning 54 Convertible to complete a powerhouse mid-size fleet of diverse fish-and-cruise yachts. The first three hulls in the Viking 54 express series are making their way down the manufacturing line at the New Gretna plant. Here’s a look at the progress of hull No. 1, a Sport Tower model with a Shark Grey hull powered by twin 1550MHP MANs.

The Sport Tower features a shapely three-sided fiberglass deckhouse (with an optional solid aft bulkhead) and a tower from the Viking subsidiary Palm Beach Towers. The deckhouse actually consists of two parts – the deck enclosure (which includes the house and foredeck) and the interior liner for the deck enclosure. These two parts are bonded together using a structural adhesive and also fiberglassed at the seams. Once complete, the deckhouse is transported via overhead electrical hoists from the Fiberglass Department (Viglass) to the awaiting hull, which already has its engines, mechanicals and many of its interior units installed.

The Open, Sport Coupe, and Sport Tower share cockpit and command deck layouts, providing an excellent use of space for fishing, diving, cruising, and entertaining. The above photos show the various hatch openings for the 54’s transom live well, fish boxes, coolers, and storage/seating areas. The cockpit and command deck, which are one fiberglass unit, are installed before the deckhouse arrives. Like the deckhouse, this unit is fabricated in Viglass and carried forward on the line.

A combination of structural adhesive, through bolts and fiberglass reinforcement, is used to assemble and unify the hull, deckhouse and cockpit/command deck. We’ll show you more pictures as the build continues. She’s scheduled to be completed in June.

Without a tower, this Viking becomes a sleek express cruiser in our popular Sport Coupe version. Hulls No. 2 and 3 will be Sport Coupes, with the latter scheduled for display at the Fort Lauderdale International Boat Show this fall.