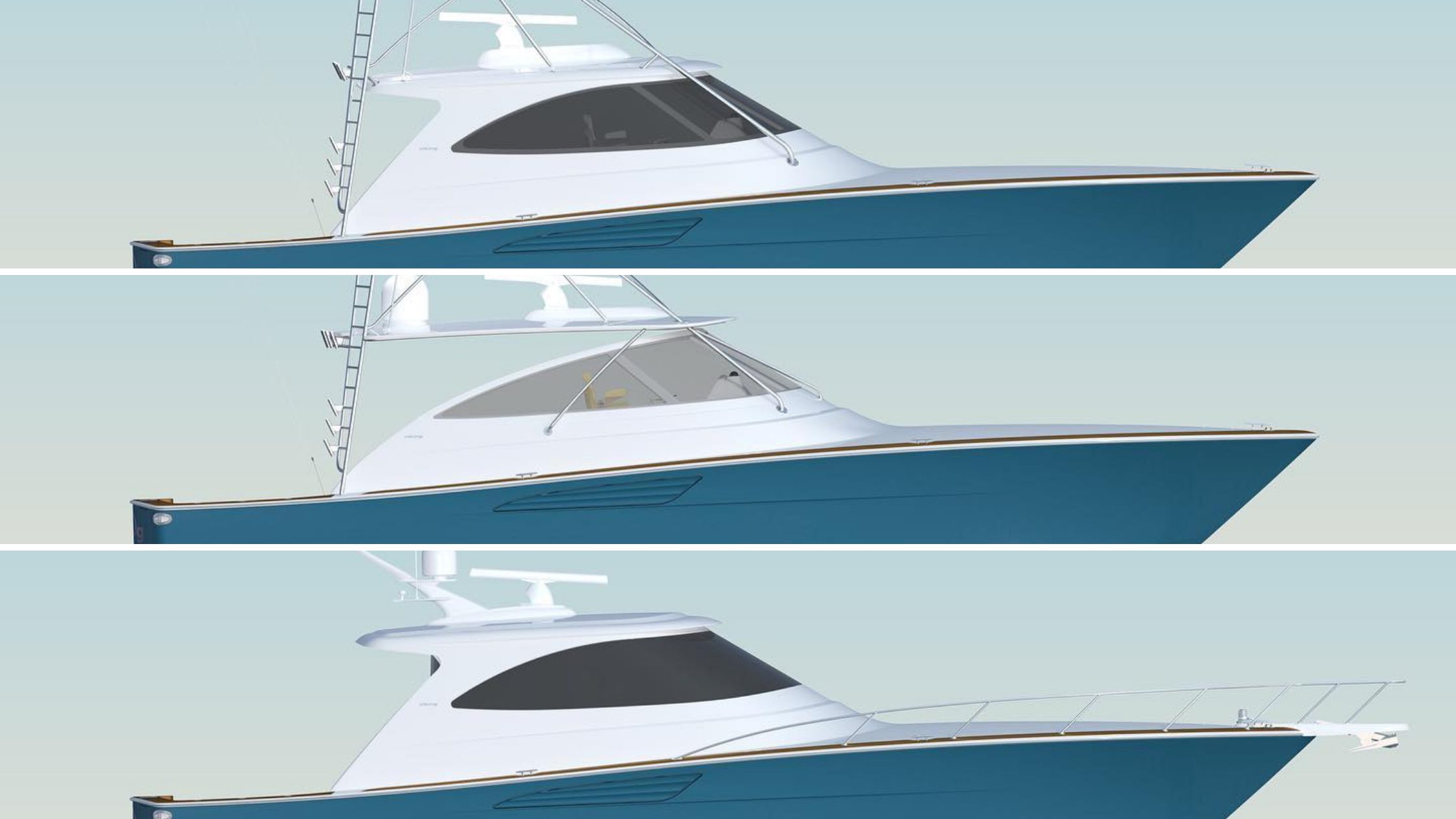 The three new models utilize the same advanced hull design of the 54 Convertible, which has been a major success since its premiere at the 2020 Fort Lauderdale International Boat Show where it captured the Best of Show Award. Team HMY has been on the tournament trail aboard the Viking 54 Convertible for several months and we can attest to the fact that this is yet another blue water champion from our friends at Viking.  With four different yachts at 54 feet, Viking makes it easy to find the boat that’s perfect for you. Their $1 million 5-axis CNC router gives them the ability to build cockpit, mezzanine, command deck, windshield and foredeck assemblies that are unique to the Viking express yacht. The 54 Sport Tower features a three-sided fiberglass deckhouse (with an optional solid aft bulkhead) and a PBT tuna tower.

The Open, Sport Coupe and Sport Tower share cockpit and command deck layouts, providing an excellent use of space for fishing, diving, cruising and entertaining. The 154-square-foot cockpit boasts twin mezzanine seating with cooler storage below, along with drink coolers, in-deck fish and storage boxes, a transom live well and a transom door with liftgate.

The command deck gives you instant access to the cockpit. The centerline helm, with its pedestal seat on a raised platform, provides excellent visibility and is complemented by port (double) and starboard (single) companion seating. Aft of the helm, there is a convergence of practical and convenience features, including two lounges, a dinette, refrigeration and tackle and gear storage compartments.

Viking’s sport boat version is also available without the tower in the sophisticated Sport Coupe model. Similarly, the 54 O can be delivered without a tuna tower as a sleek express yacht. Like the ST model, the Sport Coupe can be outfitted with an optional solid aft bulkhead.

Below, the 17 ft. 8 in. beam offers volumes of interior space including a choice of two- or three-stateroom layouts. With either, the forward master stateroom is large and fitted with a queen-size bed, plenty of storage behind the walnut cabinetry and served with a private head. Additional staterooms are found on the port side, each with upper and lower berths. The head has private access in the two-stateroom layout, while guests share the head in the three-stateroom plan.

Midship on the starboard side is a well-appointed galley with a full appliance package, walnut cabinetry, an engineered stone countertop and under-counter refrigeration/freezer units (with varnished walnut faces). Opposite the galley in the two-stateroom model is an L-shaped lounge and table. The three-stateroom version utilizes booth seating. Other notable amenities include a 43” HD TV, Amtico flooring in the salon/galley/dinette and premium carpeting in the staterooms.

As the undisputed leader for Viking Yachts, HMY averages over 100 Viking Yacht sales each year, has more Viking Yachts experts on staff and also has the largest network of Viking customers compared to any other brokerage. It’s no wonder HMY has been among America’s top Viking dealers.