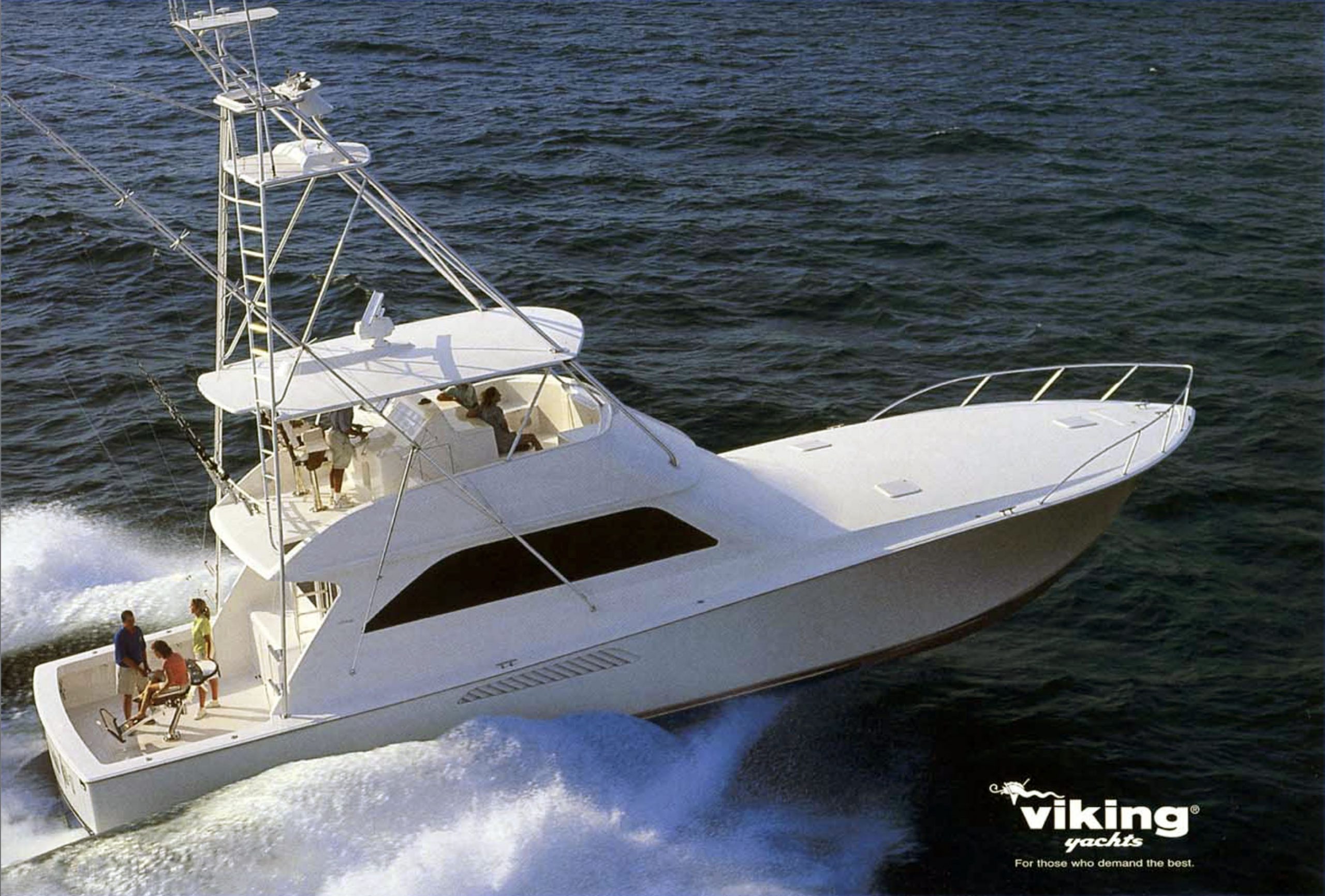 The Viking 61 is the most sought-after big convertible on the brokerage market. HMY has 8 available now.

A classic sportfishing yacht, the 61 Convertible is a tour de force of Viking engineering.

Lean and muscular on the outside, the Viking 61’s massive cockpit and superb open-water handling set the standards in the early 2000’s for sportfishing performance and design. Descended from the iconic Viking 55 Convertible, the 61 has a sharper entry than previous Vikings for a drier ride and improved headsea performance. Like the Viking 65 and 72 convertibles before her, the hull of the Viking 61 is fully cored. She was available with two equally popular interiors, a three-stateroom layout with three full heads and a four-stateroom configuration with three heads and a VIP queen forward. Like all Viking interiors, the high-gloss woodwork and rich decor make for truly elegant accommodations. An Enclosed Bridge model with a spiral salon staircase was optional. In 2005 a mezzanine deck became standard (previously optional), and in 2003 the hull bottom was redesigned for prop pockets. The engine room has standing headroom with a separate pump room forward. MTU 1500hp 16V2000 (or Cat 1,675hp C32) diesels cruise at 30 knots (35–36 knots top).

"Viking handles passenger safety better than many builders by covering the entire foredeck area with aggressive nonskid. Whoever goes to the bow to anchor or handle dock lines will greatly appreciate it."

"The Viking 61's vast 17 -square-foot cockpit is uncluttered and businesslike. A freezer, a drink box, a tackle center, a sink and engine room access are hidden neatly in the molded-in bulkhead console."

Elvee is the epitome of all 61' Vikings and was fully painted in 2010. Elvee is loaded with plenty of extras and equipment, sporting the Premier Edition decor package throughout, which has been updated extensively. The owner has spent over $400k in 2016 and 2017. Elvee is easy to see and located at our Harbour Point Marina!

Elvee is a standard three stateroom and three head layout. This 61 has an optional VIP guest stateroom forward. Each of the posh three staterooms has an adjoining private head and shower. The master stateroom features an athwartships king-sized bed w/ designer shams and headboard, twin cedar lined closets, with built in shelves, an entertainment system and plentiful drawers and storage lockers. In the starboard stateroom, generous upper and lower berths, hanging locker, deep drawers and individual A/C controls. The VIP floor plan is forward with double sized lower berth and a single upper. The washer and dryer, central vacuum are in the companionway. Frameless windows in the deckhouse provide excellent natural lighting and the dinette and settee are positioned to enhance the views at the dock and underway. The galley is most effective in utilizing space and simplifying meal prep. The magnificent salon features a U-Shaped sofa with storage and a teak cocktail table. Opposite is the pop-up 42” flat screen TV and entertainment center.

•       All wood teak flooring on salon and hallway and staterooms

Duck Soup is a very rare find. She underwent extensive updates and upgrades in 2016 including: complete paint job, black mask, motors rebuilt with 725 hours SMOH, new enclosure, all exterior cushions, teak cockpit, teak covering boards, carpet, couch, dinette, and all TVs, and mezzanine. She features a four-stateroom, three-head layout with showers and a queen berth in the forward VIP with galley up. Duck Soup had two Seakeeper 6 installed in late 2019. If you’re looking for a turn key Viking 61 Convertible, Duck Soup is your boat!

Tori's Seacret is fully equipped with an extensive list of upgrades including extra fuel, watermaker, twin generators, Eskimo ice chipper, cockpit BBQ, teak deck, teak covering boards and more. "Tori's Secret" had a fresh new paint job, completed 12/18 from the rub rail up and has her shining bright! This Viking 61 Convertible features a 3 stateroom 3 head layout with upgraded MTU 12V2000/1500 HP engines. All service work is up to date. This unique vessel gives you the option to luxuriously cruise or fish with a beautiful teak cockpit table in addition to a Bluewater chair and rocket launcher. The choice is yours. Make your appointment today to see this meticulously maintained yacht.

Seaguapa is a 2005 61’ Viking Convertible with the four stateroom, four head layout and is powered by a twin CAT C32 1500HP (2300hrs.). She is fish rigged with a Release fighting chair, Rupp outriggers, Eskimo ice machine and tackle station. Seaguapa has been spoiled throughout its life by a few owners who really know what it means to maintain a vessel such as this. Maintained by a full time American captain.

Starbright is a 2005 61’ Viking with the three stateroom, three head layout and is powered by a pair of ultra-powerful 2000hp MTU 16V-2000 M91's. She's one of only a handful of boats to receive this engine package. Starbright is fish rigged with a full tower, teak cockpit, in-deck livewell, Rupp Outriggers, Mia Epoch teaser reels, bait freezer, and rocket launcher. Other highlights include a full paint job by Viking in January 2014, Bridge A/C, Cockpit grill, swim platform, Cockpit sunshade, and a 16' Chaos flats boat.

Starbright has been spoiled throughout its life by owners and a captain who know what it means to maintain this vessel. Here is your chance to own one of the fastest Viking 61 ever made — call to make your appointment today!

Playmaker was originally an HMY demo and outfitted with the very best. She has been continuously upgraded over the years to include: completely painted from water line up, Viking installed mezzanine seating, upgraded electronics, numerous A/C and refrigeration upgrades and new enclosure. All running gear recently serviced. Playmaker is ready to go for her next owner.

Empty Pockets is arguably the nicest 61 Viking on the market. She has been maintained by a fastidious owner who prides himself on maintenance. You will find her with the preferable four stateroom and three head layout with the cockpit mezzanine. She is powered by Caterpillar C30 1550HP engines with 100 hours SMOH and only 2700 hours total time. Empty Pockets was painted from the hull up featuring stars and stripes blue hull. She also boasts one of the cleanest engine rooms with a second generator, Eskimo icemaker, and watermaker. The owner has all records to show his commitment to maintenance. Empty Pockets is a must see.