Preparing Your Boat Or Yacht For A Hurricane

With hurricane season in full swing, now is the time to coordinate plans not only for your family and your home, but also for your yacht. According to the National Hurricane Center, on average, 12 tropical storms, 6 of which become hurricanes, form over the Atlantic Ocean, Caribbean Sea, or Gulf of Mexico during the hurricane season which runs from June 1 to November 30. For 2019, NOAA's Climate Prediction Center predicts a near-normal Atlantic hurricane season, with a likely range of 9 to 15 named storms. During late August and September, we head into the peak of the Atlantic hurricane season and being as prepared as possible is always key. As a knowledgeable boat owner it is likely that you've already established a plan but it never hurts to reevevaluate your strategy. When it comes to watercraft and hurricanes, the number one consideration is determining where your boat will ride out the storm. Docked at a Marina 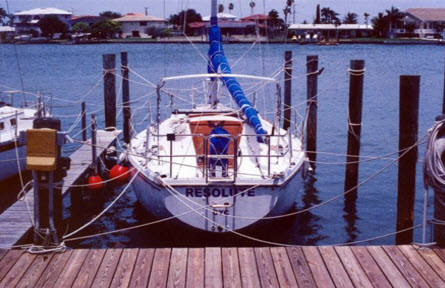 If you regularly keep your yacht at a marina, review your dock contract for fine print that may require you to take certain steps or even evacuate the marina. Talk to the dockmaster to see if they have an existing hurricane plan that you can work off of. It is not considered the best option to keep your boat at a marina but if you have no other options, here is the best guidance for both types of docks.   Fixed Docks Boat US Cat team has estimated that as many as 50% of the boats damaged at fixed docks during hurricanes could have been saved by using better dock lines: lines that were longer, larger, arranged better, and/or protected against chafing. If you decide to leave your boat at a dock, you’ll need to devise a docking plan that is liable to be far different than your normal docking arrangement. By the time preparations are completed, your boat should resemble a spider suspended in the center of a large web. This web will allow the boat to rise on the surge, be bounced around by the storm, and still remain in position. Evaluate your slip and its relation to the rest of the harbor. For most boats, you’ll want to arrange the bow toward open water or, lacking that, toward the least protected direction. This reduces windage. The exception is boats with swim platforms, especially swim platforms that are integral to the hull. These boats have been sunk when their platforms were bashed against a bulkhead. If your boat’s swim platform can’t be kept safely away from a bulkhead, secure the boat with its stern toward open water. Floating Docks Floating docks will better allow your vessel to rise and fall with the storm surge putting less stress on lines. If pilings are too short, they are less likely to accommodate storm surge. If you plan to leave your boat at a floating dock, it’s vital that you measure the height of the piling to ensure they remain above the predicted storm surge which is usually at least 10' in most storms. Pilings that are only six or seven feet above the normal high tide probably won’t be safe. When floating docks have been rebuilt after hurricanes, the new pilings have almost always been much taller, about 18’ tall, and are far less likely to be overcome by surge than the six- to eight-foot pilings that they replaced. When paired with floating docks, taller pilings are much more “storm proof". Canals, Rivers and Waterways 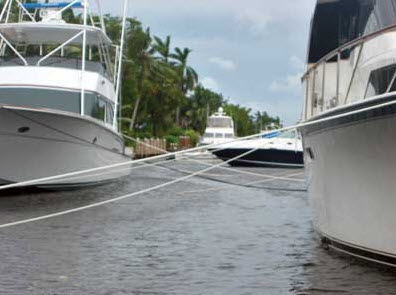 Canals, rivers and waterways are usually better alternatives to marinas, although many of the same problems exist and each requires a different approach. In canals which are referred to as the ultimate hurricane holes, try to secure your boat in the center, tying the boat to both sides using the spider web technique. Move as far up the canal as possible; the boat will be better protected from storm surge and you reduce the possibility of blocking access to other boats. If you live on a residential canal, make sure you have a community plan. Getting other homeowners involved in planning for a hurricane increases the chances that both of your vessels will survive the storm unscathed. Be sure to always maintain a navigable waterway. In wider canals and waterways, boats should be secured using a combination of anchors and lines tied to trees ashore. The more lines and anchors, the better. Locate a spot that is sheltered from open water with tall banks, sturdy trees, and minimal homes. Moor your boat away from the main channel. Other considerations: A hurricane hole that ordinarily takes an hour to reach may take two hours to reach when winds and seas are building. Bridges may not open as frequently once a hurricane warning has been posted or the bridges may be locked down to evacuate cars. Plan ahead and move your boat early. Ashore 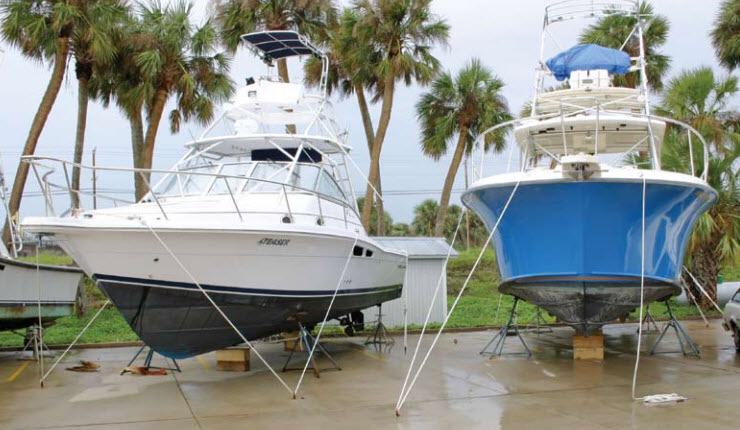 A study by MIT University after Hurricane Gloria found that boats stored ashore were far less likely to sustain damage than those kept in the water. For many boat owners, hauling their boat is the foundation of their hurricane plan. If your vessel is ashore during a hurricane it should be stored well above the anticipated storm surge. Using jackstands alone is not enough as over time, the hull can be easily worked out of position by wind gusts, making it more likely that the boat will blow over. Rising water is of course also a concern. For the best outcome ashore, strap your boat securely to some sort of anchor point such as eyes set in concrete or helical anchors drilled into the ground. Use straps with little or no stretch to them. According to Boat US, over the past few hurricanes, this technique of anchoring and strapping down boats ashore has proved to be extremely effective in minimizing the amount of damage seen.  Davits and Lifts 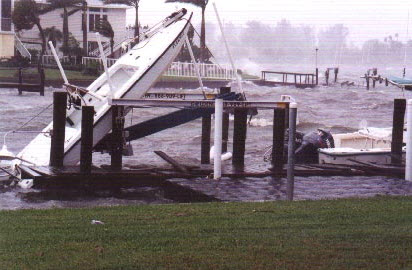 It is not advised that you keep your boat on a lift or davit since it would be extremely vulnerable to storm surge. Waters will likely rise higher than the boat can be raised. If possible, boats on lifts or davits should be taken off and stored ashore. Another alternative would be take the boat off the lift and secure it at a dock or in the center of a canal. If your vessel must be left on its lift as a last resort, remove the drain plug so the weight of accumulated rainwater will not collapse the lift. If the tidal surge reaches the boat, it will be flooded, but to leave the plug in place is likely to result in more serious structural damage. Tie the boat securely to its lifting machinery to prevent it from swinging or drifting away. Use fenders anywhere it could come into contact with pilings and lift your motors. Plug the engine's exhaust outlet and strip the boat of windage.  Trailered Boats Inspect your trailer regularly to make sure it will be operable when it's needed. Having your vessel already on a trailer makes it nice and easy to bring it to a more sheltered location away from the tidal surge. If you take your boat home, consider leaving it in the garage. A boat is lighter and more vulnerable to high winds than a car. If this isn't practical, put the boat and trailer where they will get the best protection from wind and debris. Release air out of the trailer tires and block the wheels. You can increase the weight of lighter outboard boats by leaving the drain plug in and using a garden hose to add water. Rain will add much more water as the storm approaches. This has the added advantage of giving you emergency, non-drinking water if the main water supply gets knocked out by the hurricane. Place wood blocks between the trailer's frame and springs to support the added weight. On a boat with a stern drive, remove the drain plug so that the engine won't be damaged by flooding. Secure the trailer to trees or with anchors or augers. Strip all loose gear, bimini tops, canvas covers, electronics, and then lash the boat to the trailer. Additional Points For Consideration Click here to download the Boat US Hurricane Worksheet.