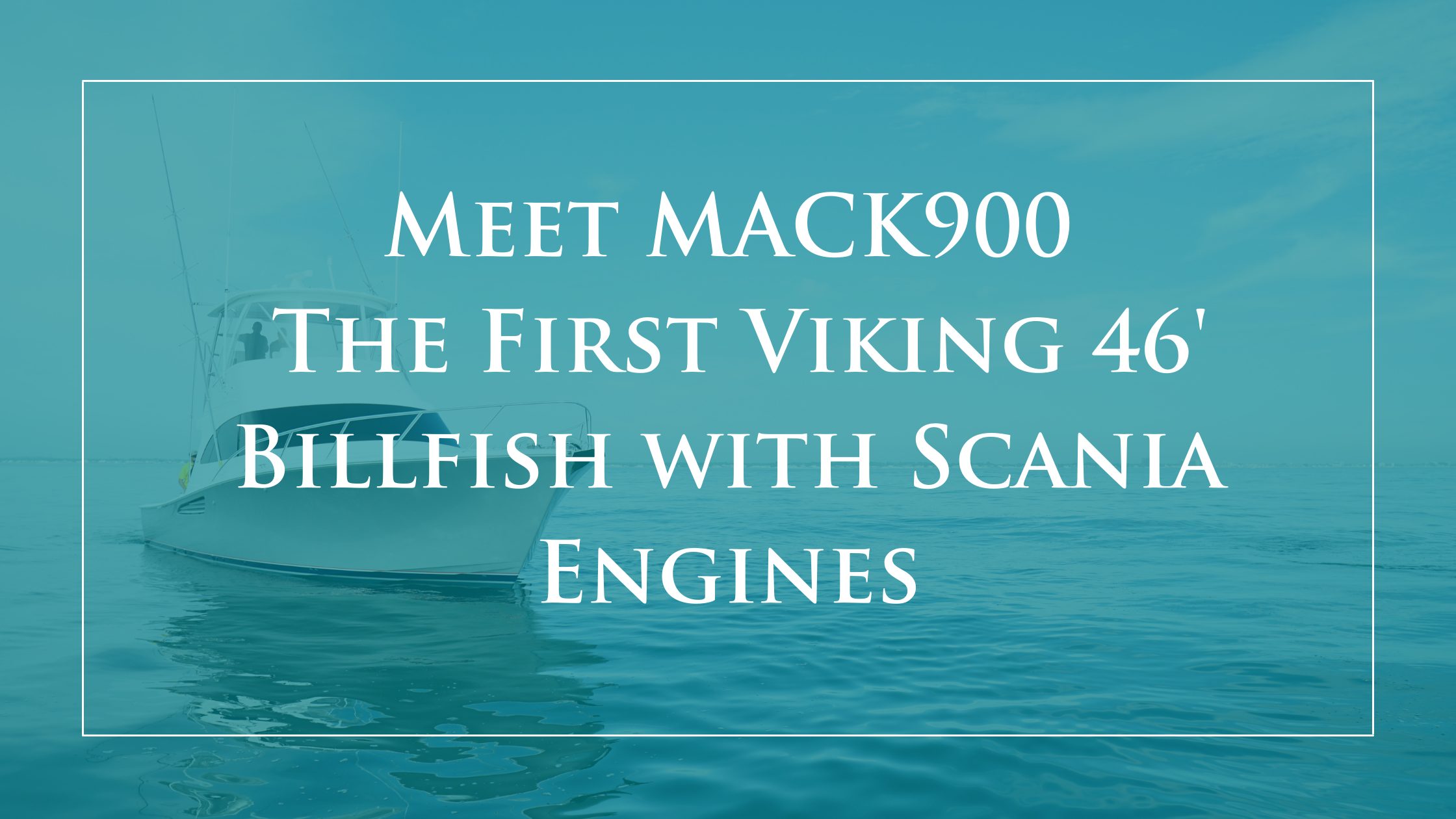 This vessel was the first ever built Viking Yachts 46’ Billfish with Scania Engines. The boat was named, “MACK900” and was seen in the Northeast and Mid-Atlantic region during the tournament fishing season in 2021.

The HMY team sat onboard “MACK900” and discussed the following questions with Capt. Jon Parmet. Continue reading to see what advantages the Scania Engine package can provide for the Viking Yachts 46’ Billfish and learn more about “MACK900” that will be on display at the 2021 Fort Lauderdale International Boat Show.

“MACK900 is the demo platform for the new Scania 900 HP recreational motors, that were recently granted EPA approval for the US Market. We could not have found a better partner than Viking Yachts to show off the product, on their new Viking Yachts 46’ Billfish.”

“The MACK900 is powered with 13 liter, 900 HP Scania Engines, that are on an inline six, and are 2300 RPM engines. They are quite a powerful platform with great fuel economy for the Viking Yachts 46’ Billfish.”

What advantages does the MACK900 powered with Scania have against other engine options?

“Besides fuel economy, some of the other advantages of the Scania Engines include the engine footprint. The engine footprint is much smaller than many people expect for a 13 Liter engine. Most engines tend to have a lot of apparatuses attached to the engine room walls, however, this is an exceptionally clean install. A lot of the Scania Engine accessories are actually mounted to the engine itself. This allows for more room to move around in the actual engine room.”

Why should future boat owners consider Scania Engine power when looking for a boat?

“The biggest reason boat owners should consider Scania Engine power is the longevity, fuel economy, and durability of the engines. I often post on social media about Scania and receive messages from people who are actually out in our field using these engines. The other day I received a message from someone at the Miami Harbor Pilot’s Association, who runs a boat with a Scania Engine, and they have a 12-year-old engine, with 18,700 trouble-free hours on it and they service the Scania Engine themselves.”

Do you see Scania Engines being a common future option in Viking models?

“Yes, I do. I see these engines being used by someone looking for a premier engine package, a customer who wants a high-end performance engine. This is the highest HP engine offered on the Viking Yachts 46’ Billfish.”

What allows Scania Engines to stand out in the market?

“Many people are under the impression that Scania Engines are new or haven’t heard about them. However, Scania Engines have been around for over 100 years in both truck and marine applications. The first marine engine was introduced in 1902. They are made in Sweden. Scania came from a commercial background and has been tried and true. These engines are in a lot of different applications on the commercial side including tugs, barges, ferries, and commercial fishing vessels. These operations depend on these engines. It is not a new product; it is just a new rating for the recreational market.”

Who services Scania Engines in HMY’s territory in the Southeast United States?

“Scania Engines have a phenomenal service network throughout Florida, Georgia, and South Carolina through Mack Boring. This is my territory, but we have a great service team along the entire Eastern seaboard. We have about 15 dealers in the Southeastern territory, and they are the best of the best! We are proud of the network we were able to put together down here.”

What would interest someone in Scania ownership? What is one of the biggest benefits?

“One of the biggest benefits for someone considering Scania ownership is the actual cost of ownership. Scania Engines offer Single-technician serviceability. This is means that instead of having a singular, heavy cylinder head, we have six individual cylinder heads. Anything on our engines can be done with one technician. Even better, Scania Engines have a 300-hour service interval and do not require the use of synthetic oils in their engines. This allows the cost of ownership to be much lower than the cost of our competitors.”

“After 300+ hours of running our 46’ Billfish demo, we have seen nothing but positive feedback from all involved.  Those who have run the boat comment about the high torque, quick acceleration, lower noise, and vibration levels, and of course faster cruise and top speeds of the vessel.  We are more confident than ever that customers will see this package as the Premier Power option in the 46’ Billfish, or any other recreational vessel going forward”.

To learn more about Vikings on display at the Fort Lauderdale International Boat Show and potential Scania Engine packages, contact one of our Viking Yacht Specialists today.