John Staluppi has enjoyed a long career on the water as both a boat and yacht owner, and as a builder of ground breaking megayachts with quite a history. His current Viking, which he purchased from HMY Yacht Sales, is a 92 Enclosed Bridge Convertible, aptly named Miss Moneypenny due to his affinity toward James Bond. But unlike the clandestine demeanor of Mr. Bond, John Staluppi demonstrates a candid personality who loves spending time on the water and collecting classic automobiles, including his favorite, a 1962 Corvette. 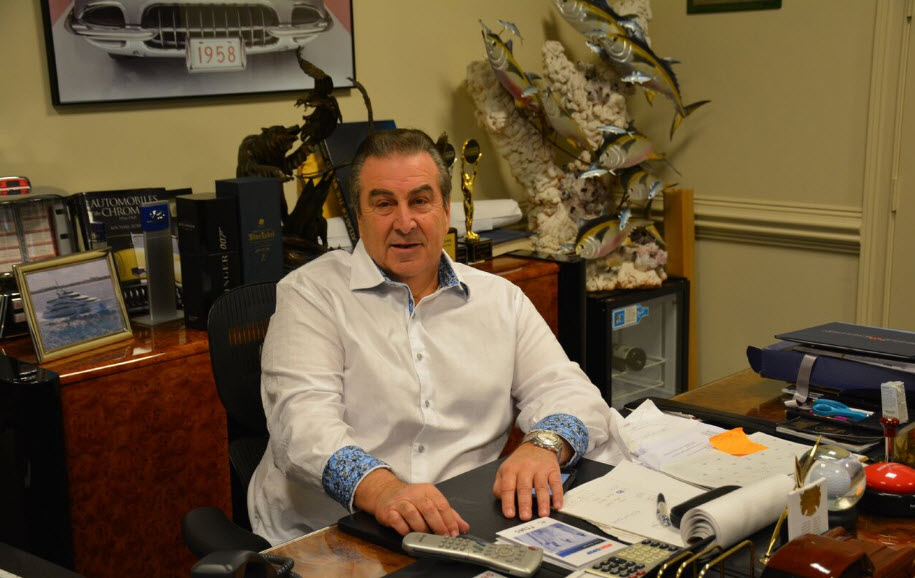 Valhalla: How did you get started in boating?

John Staluppi: I always have had a liking for the way mechanical things operate and have a mechanical mind. I started working on cars when I was 16. Back in the 1960s I was employed at a Chevrolet dealer as a mechanic. The owner of the dealership had a Shepherd runabout, one of those varnished mahogany sport boats popular at the time and it needed some engine work. I took on the repower job for the boss and replaced the old one with a Corvette engine. The owner was thrilled with the boat’s performance and I was sold that boating could be fun especially when speed is involved. My main business has always been automotive, gas stations and auto dealerships, but the boating bug caught me early. I got into boat racing and owned a 35 and a 37 Cigarette, but I was all about the speed so I built the engines myself. I have owned probably 22 boats in my lifetime, and I like building them and using them. 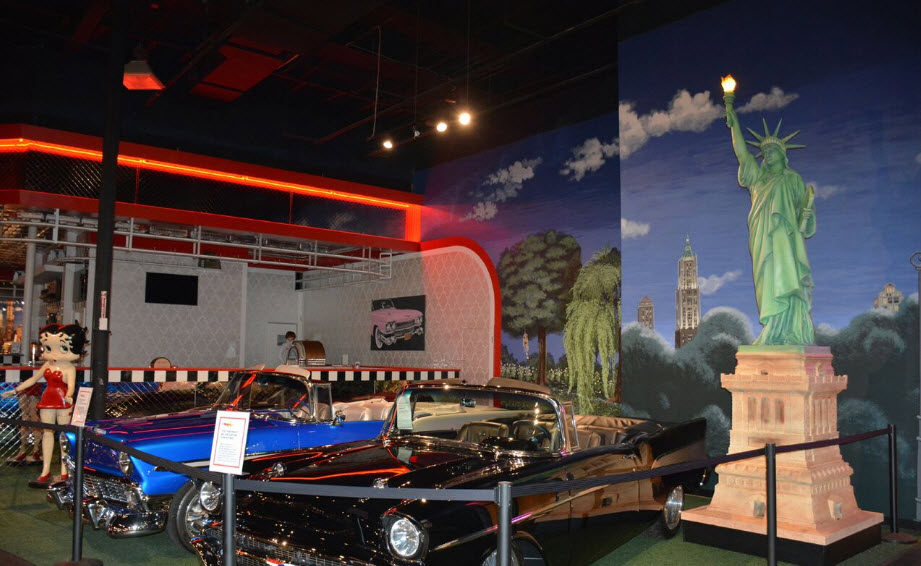 V: You also have a passion for yacht design?

JS: This is true. Back in the 1980s I became involved with Frank Mulder, a naval architect. I owned an Ocean Yacht and I liked its speed. My idea was to build the fastest megayacht. I knew I could never own the largest because that goal would be endless. Someone could always add a foot and be the next biggest. But speed is different. My goal was to build and have the fastest megayacht because there can only be one that is the fastest. When you pull into the dock with the fastest yacht, you are the only one. That is the boat that people want to see. We got busy tank testing to design the best hull and superstructure to maximize performance for speed and stability. We mixed propulsion systems with water jets and diesels and never lost sight of the goal to build the best we could. In 1988 I built Octopussy, a 143 foot Heesen that topped out at 53 knots. My passion for speed led to other triumphs like the 165 foot Moonraker, which hit 61 knots. The 140 foot The World is Not Enough, topped 66 knots. These days I have throttled back and concentrate on designing yachts devoted to more comfort and luxury accommodations.

V: When did you buy your first Viking?

JS: My first Viking was a 74 Convertible, which I purchased from Steve Moynihan of HMY Yacht Sales in 2008, named Miss Moneypenny. Over the past 15 months I also have purchased from Steve a 70 Convertible, an 80 Convertible, and now the latest Miss Moneypenny, a Viking 92, which I took delivery of in September. I’m not sure if anyone has ever bought boats this quickly, but I know my next boat will be through Steve again. Both he and Pat Healey are true professionals. 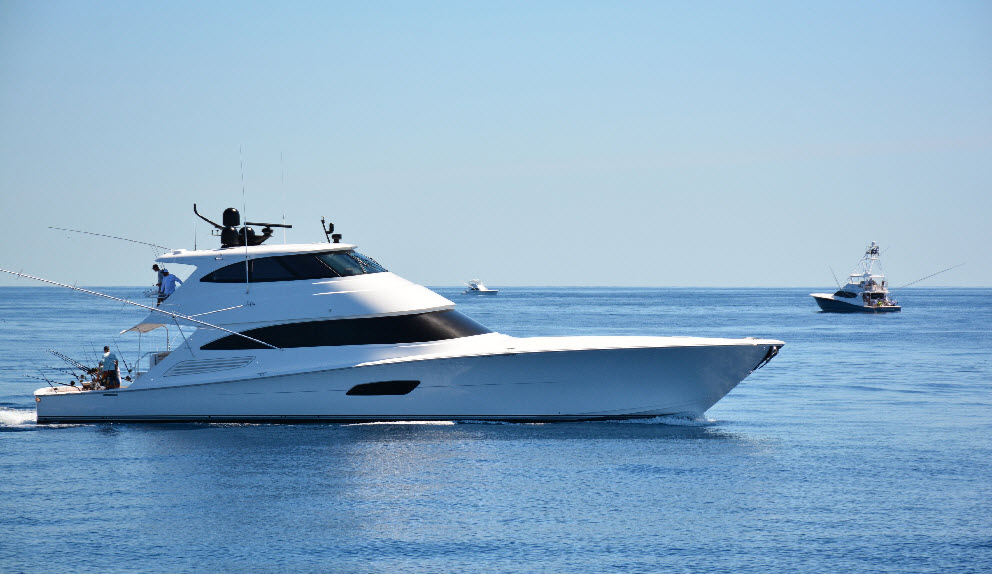 V: What pleases you most about a Viking yacht?

JS: I have always worked hard and have built a wonderful business in the automobile industry as the third largest car dealer in the country. So when I am ready to relax I want to be on the water. Viking lets it happen. The boats can take rough water. They care for their customers. The service is there when you need it. Viking is family owned and they stand behind their product. They have a passion like me. There are many custom boats out there, but Viking has it all and this is why I am a repeat customer. Viking offers a lot of boat for the money.

V: What do you like about building a Viking yacht?

JS: Viking is in the sportfishing business and building a Viking yacht always is a good experience. They know what you need and are helpful in every way to build you the boat you want. When I was building the latest 92 Miss Moneypenny, I wanted to remove the rear staircase on the upper cockpit leading to the enclosed bridge to make more sitting room for eating and relaxing. It was no problem. They are receptive to changes, which add comfort to the building process when needing to make decisions. The Viking people are very helpful and accommodated my wife when she was decorating and designing the interior for the way we want to use the boat. The end result is very important to us and Viking makes it happen. I enjoy it when people come on my boat and I can explain to them why I bought a Viking. I love building a boat and I love using it. The Viking 92 is actually two boats in one. It has the accommodations of a motor yacht for cruising and anything you need for fishing.

JS: A Viking yacht gives you a lot of memorable days. Last summer I caught my first white marlin during the MidAtlantic tournament on my 92. My 70 Viking ran 43 knots and I love that speed. I like running my Viking in rough water while I’m on the bridge sipping a cocktail. The feeling is unbelievable. Instead of sending the boat to the Bahamas and flying in to meet it, I take the ride and enjoy my time aboard. 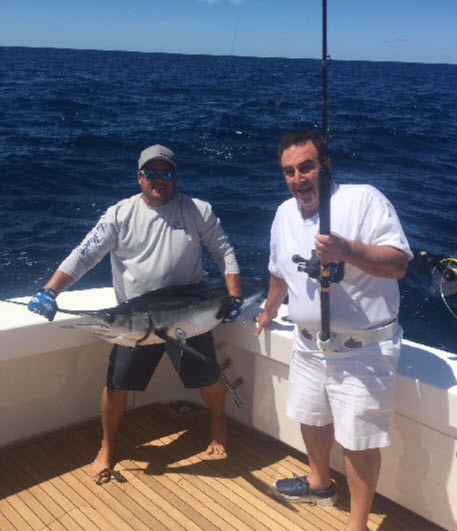 V: Where do you do your boating?

JS: All of my auto dealerships are in the New York area. Much of my cruising time is spent in New York and Long Island waters, as well as New England. In the winter much of my cruising is through the Bahamas. I hope to ship Miss Moneypenny to Europe to cruise the Med through Monte Carlo and Italy, unless I decide to build a new Viking and ship it over instead. On my next boat I want to add the convenience of heated tile floors in the heads and seamless electrical transfer so when we are switching over power sources nothing shuts off inside the boat. Viking knows exactly what I want.

Want to own your own Viking Yacht? Check out all available Viking models here.