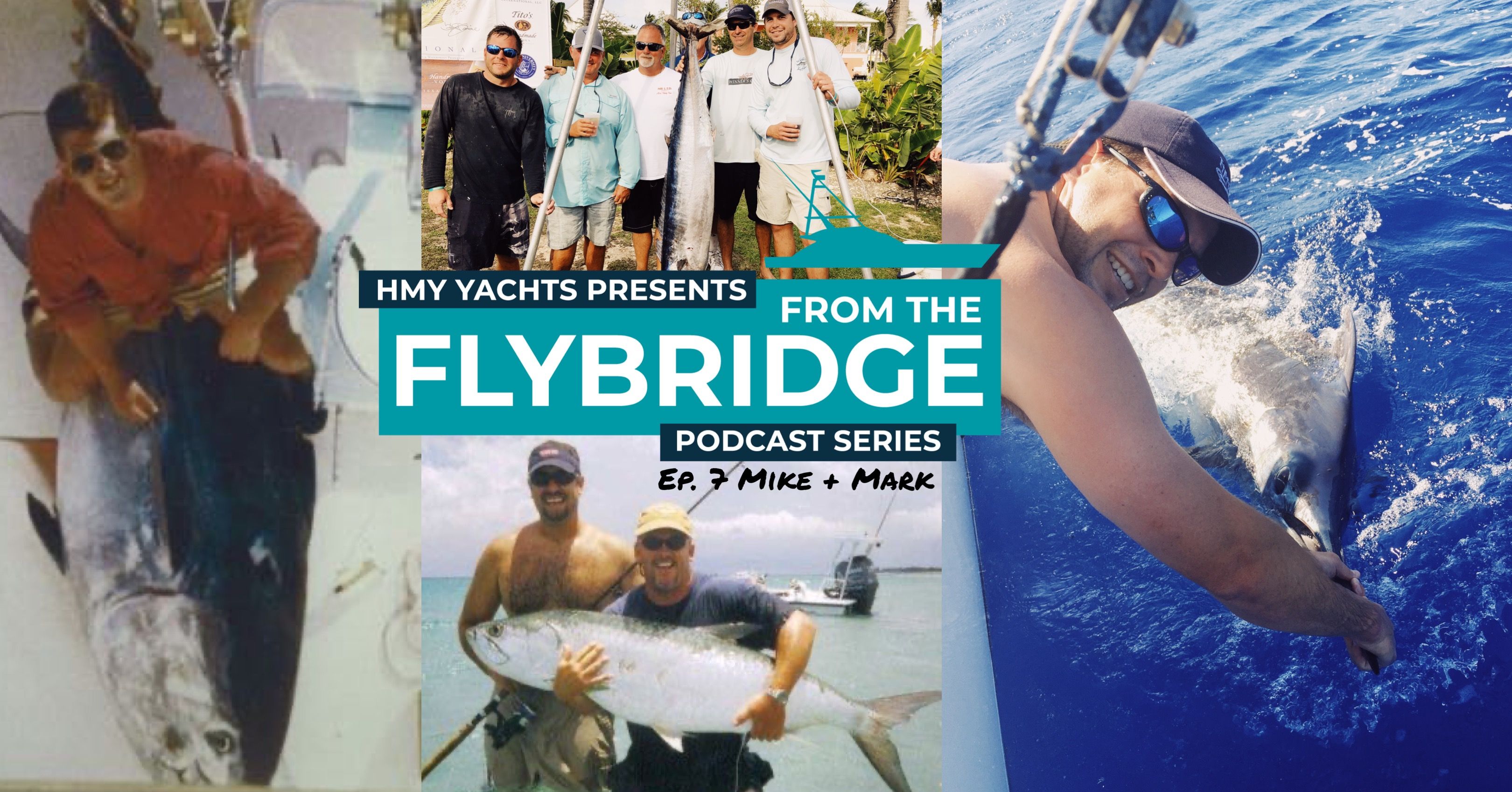 From the Flybridge #7 – Mike McCarthy and Mark Mitchell

HMY Yachts “From the Flybridge” is back with podcast episode number seven. Listen in as we talk with Mike McCarthy and Mark Mitchell, two of our own yacht sales success stories. From Wall Street to Walker’s Cay, hear how they took different paths to yacht brokerage and how they’ve made their mark on the industry.

Here is a preview of the podcast below. For the whole episode, click here.

Alexie Creary: There is new technology out there, and this new technology is called sonar. Let’s talk about that. There are boats that have it and there are boats that don’t. Can both of you elaborate? Tell them what sonar is, what it shows, what it entails. The biggest question, do you think it’s cheating or not? Obviously, it’s not, it is very much allowed… I’m just saying for those that are fishing against those that have sonar… we’re coming up on big tournaments. Skip Smith just had a lot of large tournaments, big money. What are your thoughts on sonar?

Mark Mitchell: The bottom machine that we had, we just replaced the transducer and it was great. Actually, the electronics on the boat were brand new and this was our first time testing it out in the Walker’s tournament. We could actually mark a marlin and watch it and you’d have to do circles, but you could actually follow it. I think at one circumstance, we probably raised one of those fish. The Omni sonar, which is what drops down below the boat, and you can actually see 360 degrees at certain angles. I don’t know all the technical terms, but a lot of the guys in the Gulf are using that, and they’re having great success with following fish and actually seeing what’s going on and seeing if they’re going up or down or staying put. Blue marlin don’t eat every day. You have to follow them around. You have to see what they’re doing. A lot of those guys will follow them around for hours and pitch them down baits and see when they eat. They have success sometimes. So I think it’s the technology.

I’m laughing because I’m going back to my dad, and he had an actual printer in the attic from his old boat. He showed it to me a handful of times when I was growing up. He would actually print the sea bottom and he was so proud of it. He’s like, “Look at this! This is the coolest thing ever!” That is what they had for technology. Now, obviously, we are dropping sonars out of the bottom of our boats, and we’re like “Hey, there is a Marlin 100 feet to the left.” It’s a different ball game. So, you know, it’s the sign of the times. It’s technology. Look at our iPhones, look at our tablets, look at everything that’s going on. Of course, they’re going to come out with something that can pop down out of the bottom of the boat and see where a fish is going. Now, you still have to have a crew that knows how to follow it, knows how to pitch a bait down to it, feeds a bait properly. A crew that knows how to tie knots and be able to pull a fish in.

Alexie Creary: That’s a great point. We can know where the fish is at and technology takes us there but you still have to have the right hands to get you to the rest of the story. I like that you brought that up.

Mark Mitchell: Everyone can have sonar, but you're still going to have the top two or three guys that always are on top and there is a reason for that.

Alexie Creary: Mike, you told me a really good story offline that we didn’t get to finish. It had something to do with somebody you knew that had sonar?

Mike McCarthy: Yeah, a good friend of mine is a world-class marlin and sailfish fisherman down in the DR. He runs a high profile boat down there and his boat does not have the drop-down sonar. His friend who runs a different boat called him and said “Hey, listen, you have a school of fish blitzing across your spread right now. Look down.” He said “Oh my God.” So, as a result of it, his boss is going to retrofit, which is a pretty healthy investment, to put the Omni sonar in there. He fished a couple of the Triple Crowns down in Costa Rica and they sort of did the same thing. It’s the evolution of technology. It is what it is. You have to utilize what you can to your greatest advantage. I mean, who knows what’s going to happen down the road with drones. That’s going to come into play someday.

Alexie Creary: So I want to hear from both of you… Craziest story with a potential client.

To listen to the full podcast please click the link below. Our podcast series is available online on Apple, Spotify, and www.HMY.com.