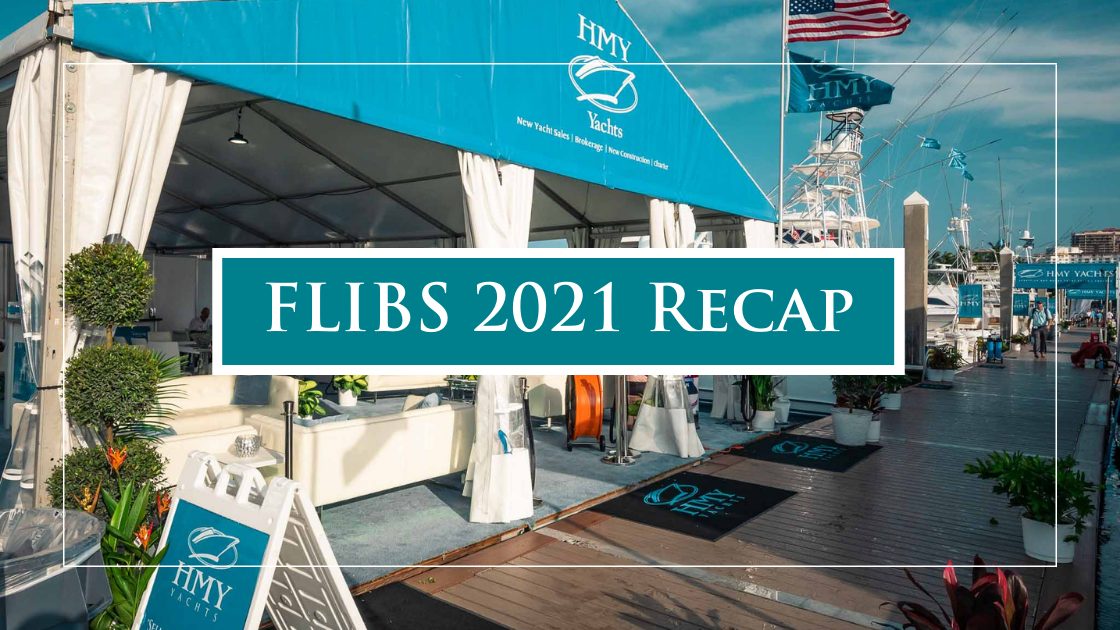 HMY Yacht Sales had yet again another spectacular showing at the Fort Lauderdale International Boat Show.  Better known as “FLIBS”, this year marked the 62nd year of this annual event. 2021 brought near record crowds, breezy fall Florida weather, and boat enthusiasts from around the world to the show. HMY had a record show with over $100,000,000 in sales at the show.

HMY Yacht Sales had brokerage boats on display that ranged from thirty-foot center consoles to one hundred and fifty foot plus super yachts. The number of HMY brokerage boats sold reached double digits by the end of the show and numbers will climb as HMY continues to close deals in the weeks to come. The brokerage sales included a variety of models ranging from a 37’ Grady-White to a 116’ Azimut.

Viking Yachts had the new Viking 64’ Convertible make her long-awaited debut at the 2021 Fort Lauderdale show. Some of the Viking 64’ Convertible’s most notable features are her horizontal wood grain throughout her interior, her increased storage space, and her sleek, flush helm controls in the flybridge.

Last, but not least Pat Healey of Viking Yachts announced the “heir to their throne” the new Viking 90’. The Viking team continues to “build a better boat everyday”! The Viking 90’ will be offered in three models, the open bridge, enclosed bridge, and sky bridge.

Princess Yachts had seven class-leading models on display in Fort Lauderdale. The most notable of these seven yachts was the Y72. The Princess Y72 made its North American Premiere Showing at FLIBS.

This vessel was finished with lofty standards throughout, and her all-new design features are comparable to those of larger Y-class yachts. The Princess Y72 vessel can accommodate eight guests total—six guests across her staterooms and two in the master. She was a must-see at the show!

The Princess X95 made her Fort Lauderdale International Boat Show debut this show. The X95 originally made her North American debut earlier in the year at the Palm Beach Boat Show. HMY Yacht Sales sold two of these vessels at the Fort Lauderdale Boat Show.

The OKEAN display was buzzing with activity from admirers and clients. OKEAN had three models on display including the 50 Fly, 55 Sport-HT, and the 80 Fly. The OKEAN 80 Flybridge Motor yacht made its long-anticipated debut at FLIBS!

The OKEAN 80’ is the largest of the OKEAN line. The 80’ is expansive and lavish, to say the least, and was awarded “Revelation of the Year” at the World Yachts Trophies 2020 in Cannes. Fort Lauderdale Boat Show attendees saw why, when they witnessed her gorgeous build at the show.

HMY Yacht Sales is proud to represent Two Oceans Power Catamarans. Our Power Cat team worked with clients during the Fort Lauderdale Boat Show to answer any, and all questions that they had on this new design.

HMY will be the exclusive distributor for the U.S.A., Canada, Central, and South America, The Caribbean, and The Bahamas regions, starting with the 555 built by Two Oceans Marine Manufacturing and designed by Du Toit Yacht Design.  This impressive 55ft Power Catamaran aims to launch mid-2022.

HMY Yacht Sales sold two of the 55 Two Oceans at the Fort Lauderdale show.  The first 3 hulls are now under contract and in build.  Hulls #1 and 2 will make their American debut early next summer.

If you missed the HMY Yacht Sales brokerage lineup, the Viking and Valhalla display, the OKEAN display, the Princess Yachts, or the Two Oceans Power Cat team at the show, contact us online or for additional information for all your yachting needs.