Find A Holiday Boat Parade Near You

As fall 2017 comes to a close, we are preparing for the most wonderful time of year - when temperatures start to cool off, family comes together and holiday traditions are in full swing. Anyone who experiences Christmastime in a coastal town knows there is no better way to celebrate the magic of the season than on the water taking in the twinkly lights and festive decorations of a boat parade. From Charleston, South Carolina to the Florida Keys, we provide you with a complete list of the upcoming Christmas boat parades that are sure to put you in the holiday spirit.

Each December, hundreds of spectators line the 6 1/2 mile parade route in Boca Raton to watch spectacularly decorated vessels of all sizes cruise by. Entry into the boat parade is free with thousands of dollars in cash prizes and awards. Entering your boat in the 41st Boca Raton Holiday Boat Parade is the perfect opportunity to enjoy the Holiday season! Last year, over 25 boats participating and this year promises to be just as exciting. Come out and enjoy this unique event!! The route begins at the Intracoastal Waterway starting at the C-15 canal (Boca Raton-Delray Beach city limits) traveling south to Hillsboro Bridge. Public viewing locations included Red Reef Park and Silver Palm Park. Estimate Bridge Closing Times: Bridges are held in the up position for approximately 45 minutes • 6:50 – Spanish River • 7:20 – Palmetto Park • 7:30 – Camino Real.

The Boynton Beach Community Redevelopment Agency and the City of Delray Beach invite you to celebrate the holiday season Florida style with the Boynton Beach & Delray Beach Holiday Boat Parade, December 8th. This flotilla of brightly-decorated boats will line up at the Lantana Bridge near Old Key Lime House and motor south at 6:30 pm along the Intracoastal Waterway to the C-15 canal in Delray. The event at the Boynton Harbor Marina starts at 6:00 pm with live music setting the stage for the parade. This illuminating holliday tradition can be viewed in Boynton Beach at Intracoastal Park, Jaycee Park and in Delray Beach from Veterans Park. Please bring a new, unwrapped toy for Toys for Tots. Dowload the entry form here.

The 36th Annual Charleston Parade of Boats, which takes place on Cooper River, in the Charleston Harbor and Ashley River, is organized by the City of Charleston in partnership with Charleston Sail and Power Squadrong and makes for the perfect way to kick off your holiday season. There will be a viewing party at the Charleston Maritime Center presented by the historic Rotary Club Of Charleston and the City of Charleston. Here you can enjoy savory foods, holiday tunes and the best vantage point for viewing boats decorated in lights, trees, music and more as they dance across the harbor. Click here to purchase your tickets to the 4th annual viewing party.

Starting in Fort Lauderdale’s Downtown, traveling East on the New River and North on the Intracoastal to Lake Santa Barbara in Pompano Beach, it’s 12 Miles of the “Greatest Show on H20.” Winterfest, which gained recognition for its one-of-a-kind boat parade, brings together the Ft. Lauderdale community and attracts visitors from around the world. In 1988, community leaders decided to build upon the popularity of the Boat Parade and create a non-profit organization that would turn the in-water parade and all of its surrounding events into a world-class community extravaganza. Broward County also benefits, thanks to Winterfest’s powerful economic impact on the community of more than $50 million per year. 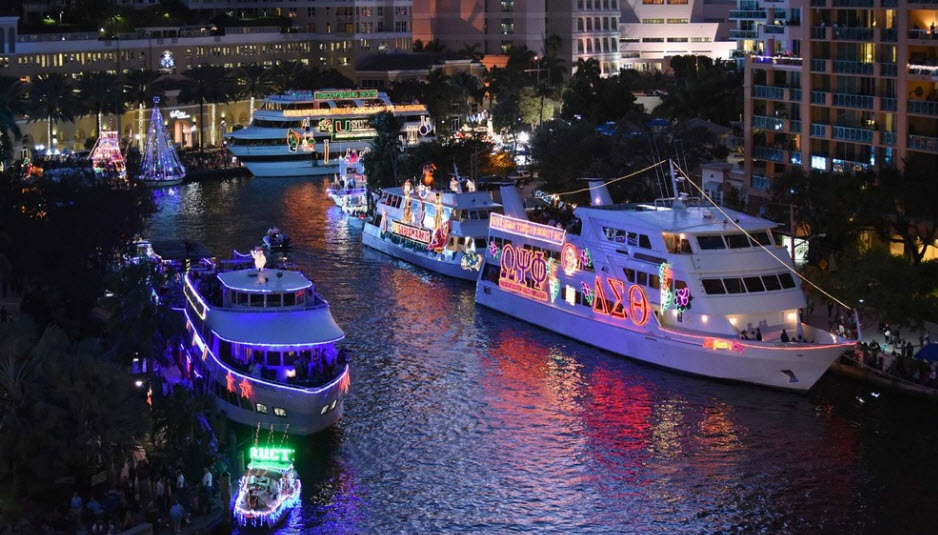 The Jacksonville Light Parade has become a tradition for thousands of families and out-of-town guests who eagerly await the transformation of the St. Johns River. Boats of every shape and size feature decorations that captivate senses and stimulate imaginations. This enchanted night is topped off by a fireworks display like no other, featuring the signature bridge "waterfalls." Admission is free. 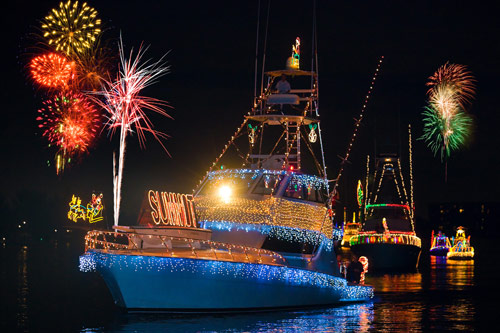 Paradise is back on track after hurricane Irma and the annual Key Largo Boat Parade is on. Each December, Blackwater Sound in Key Largo offers spectators a dazzling show of decorated boats that parade along the water in celebration of the holiday season. Boats line up at 6:30 pm and start at the mouth of Dusenbury Creek, channel marker 41, on Blackwater Sound, continuing north along the shoreline to Gilberts. The best viewing and libation locations are to be found at Sundowners where the winner's party will be held at 10pm, Jimmy Johnson’s Big Chill, Senor Frijoles, the Marriott Key Largo Bay Resort and Caribbean Club, MM 103-104. Boat entry is no cost. All the boats participating, except for the grand prize winner, will automatically be eligible for a random drawing to win $500.00! For one lucky boat, it will pay to enter the parade, what better way to kick off the holidays? Click here to register your boat.

Get ready to ring in the holiday season Florida style with the 37th Annual Martin County Holiday Boat Parade also known as the Stuart Christmas Boat Parade. The highly anticipated parade on the river will launch at the Jensen Beach Causeway at 6pm and proceed to Sandsprit Park and into the Manatee Pocket where we it will wrap up at the Twisted Tuna and winners will be announced shortly thereafter. The judges boat is to be sponsored by Chapman School of Seamanship will be located near the Evans Crary Bridge. The event is free for both spectators and participants and is hosted by Marine Industries of the Treasure Coast. The public is invited to enjoy viewing the parade boats at restaurants, parks and other locations along the route as well as walking along the docks to view the boats and meet the crews. Captain's Meeting will be held on Friday, December 8th from 5:00-6:00pm at the Twisted Tuna in Port Salerno.

The 20th Annual Miami Outboard Club Holiday Parade will have over 50 Boats participating in the holiday fun, which starts at 7:00pm on Saturday, December 16, 2017. The event is a longstanding community tradition and an integral part of The Miami Outboard Club’s Family and community activities. Each year this event brings residents together for the holiday season. The official viewing venue is Bay Front Park where spectators will find food vendors, a bounce house, DJ and firework show at 9:00pm. 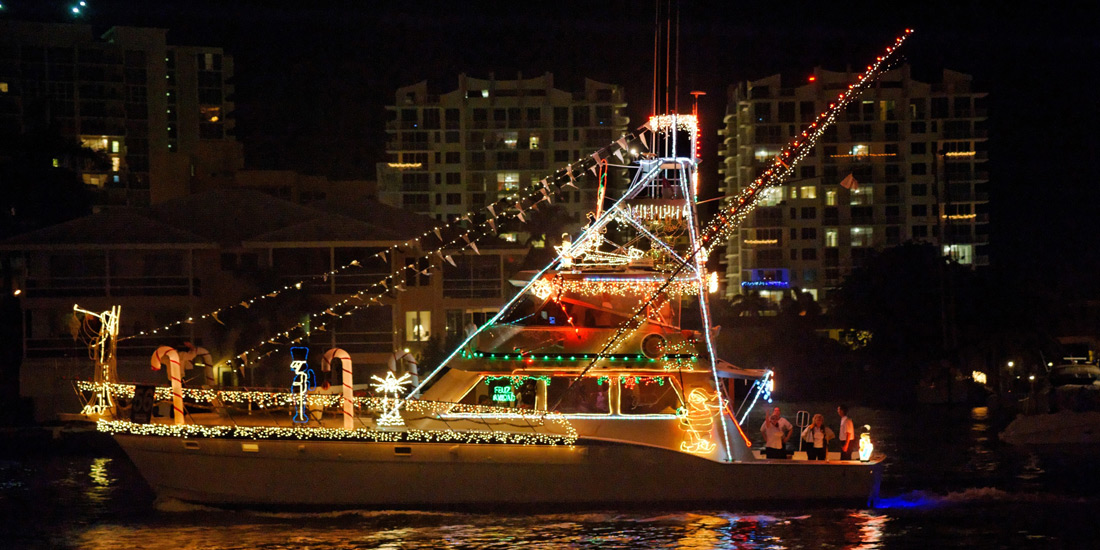 This marks the 27th Anniversary of the St. Lucie Christmas and Winter Holiday Boat Parade. It promises to be the biggest and best. The parade route begins at Taylor Creek near Harbortown Marina at 6:30 pm and proceeds past the South Beach Causeway turning around westward at the Fort Pierce Inlet at 7:00 pm. The parade route then continues, ending at the Fort Pierce City Marina and Tiki restaurant at 7:45 pm. Captains meeting will be held on Friday, Dec 9 at 6:00pm at the Salfish Brewery in Ft. Pierce. Prizes will be awarded to winning boats at the Fort Pierce City Marina and Tiki Restaurant following the parade. There will also be a Downton Christmas Holiday Paddle Parade at City Marina at 6:00PM. Route starts at the Manatee Center and ends at the Tiki Restaurant where judging and awards will be held. Attend the mandatory Captain's meeting at the Sailfish Brewery on Friday, December 8th at 6:30PM.