If you're the owner of a boat or yacht, you are one of the lucky one's who can blaze a trail through the waters of the pristine Dry Tortugas National Park where adventure awaits. Only accessible by private vessel, ferry or seaplane, The Dry Tortugas lies 70 miles west of Key West, Florida and the uninhabited island chain presents anglers and yachtsmen with the year-round opportunity to fish unspoiled waters, snorkel over incredible reefs and shipwrecks, enjoy endless ocean views and explore impressive Fort Jefferson on Garden Key. The Island chain of the Dry Tortugas was initially discovered in 1513 by Ponce de Leon who dubbed it Las Tortugas, meaning The Turtles, for the large number of sea turtles in the area. The name Dry Tortugas, which came much later, represented a warning to seafarers that the islands contain zero sources of fresh water.

On Garden Key, the most well-known island in the group of the Tortugas, you’ll find historic, hexagonal Fort Jefferson which was originally meant to play a key role in America’s coastal defense system. Its purpose was to control navigation into the immense Gulf of Mexico and protect the Atlantic-bound Mississippi River trade from the threat of piracy. Eventually, Fort Jefferson was used to house prisoners like the four President Lincoln assassination conspirators. Construction began on the fort in the year 1846, it used over 16 million bricks making it the largest masonry structure in the Western Hemisphere and it features an incredible 2,000 carefully constructed arches. The fort was never 100% completed but it is still an unbelievable sight to see and you'll explore its remnants in what is considered America’s most remote and least visited national park. 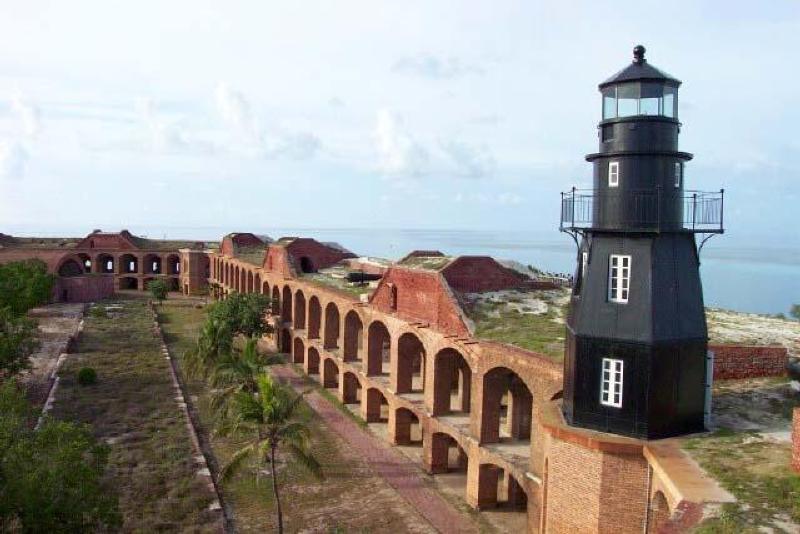 The best way to experience the Tortugas, especially if you'll be spending your time fishing and exploring, is on a multi-day trip. Being well-prepared for your trip is essential since the Dry Tortugas is a considerably stark destination. Boaters can't forget to bring along plenty of fuel, food, water and any other necessities because none of that will be available for purchase. If you’ve got your own sportfisherman or motor yacht, you can anchor at designated spots around Fort Jefferson and get in a full day of fishing or sight-seeing without the worry of getting back to Key West at a certain time. Once you've arrived to your destination, check in at Fort Jefferson first to obtain the required free boat permit and to learn precisely where you can drop your anchor as well as which areas are off-limits to fishing. Boaters can use the slips on a first come first service basis to unload camping gear and supplies or take a walking tour of the fort. As the harbor can be busy with many small private boats there is a two hour limit for slip usage. There are many mooring balls available throughout the area as well. Overnight anchoring is only allowed in sandy bottom within 1 nautical mile of the Garden Key lighthouse. 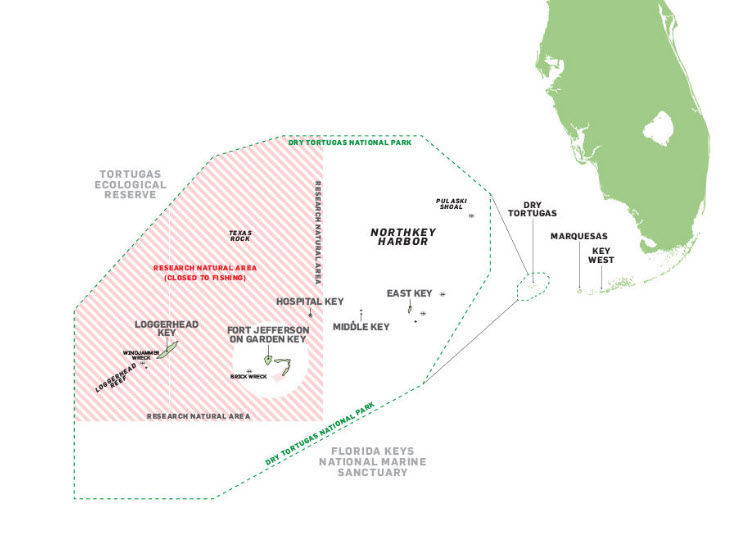 On your approach to Fort Jefferson from Key West, you'll start to find various areas of patch reef alternating with deeper channels. The crystal-clear waters will reveal visible shipwrecks as well. In such stark place with an abundance of marine life you can bet that the fish are biting a majority of the time. Expect to catch an extraordinary variety of different species in the Tortugas. Due to the distance of the area from Key West, the reefs around the island chain receive very little fishing pressure. A typical fishing trip might include Red, Black, Gag, Yellow Edge, Yellow mouth, Scamp and Strawberry Grouper. All kinds of Snapper are abundant and common catches including Yellowtail, Red, Mutton, Mangrove, Dog, and Cubera Snapper. You can also hook up with King Mackarel, Cobia and deep water species like Snowy Grouper or Golden Tile Fish. Tuna, Wahoo, Dolphin, Sailfish and other big-game fish can be caught trolling, or occasionally while anchored. Depending on weather, season, and your own strategical preferences, you can fish the plentiful reefs, numerous wrecks and deep ledges. Offshore trolling and deep dropping are certainly other great options in these scarcely fished waters. Note that spearfishing and lobstering is strictly prohibited in the National Park. There are also some restricted portions of the waters off the Dry Tortugas so it's important to pay attention to where you can and cannot fish. 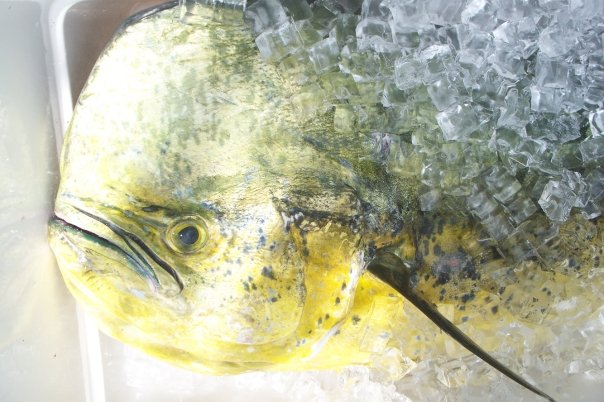 With so many shipwrecks and a plethora of reefs, the crystal-clear waters of the Dry Tortugas are home to an underwater paradise for snorkelers and divers. Because the area is located so far away from civilization, the reefs are virtually untouched and undisturbed. The park’s corals and seagrass communities are among the most vibrant in the Florida Keys. They are a sanctuary to gorgeous marine life. The most popular dive in the park is the wreck known as the Windjammer. Its real name was Avanti. Built in 1875, the three-masted, iron-hulled, sailing ship wrecked on Loggerhead Reef in 1901 on its way to Montevideo with a cargo of lumber. Before diving this site, be sure to pick up a laminated underwater map at the visitor center. This map will provide you with a self-guided tour of the wreck and allow you to make sense of what you are seeing. Depths on this site range from zero feet, where a small piece of wreckage breaks the surface, to 20 feet. It is a perfect place for snorkelers and scuba pros to dive together. The best visibility on the site is during flood tide. The site is a true aquarium attracting a host of fish ranging from massive jewfish to small tropical species. 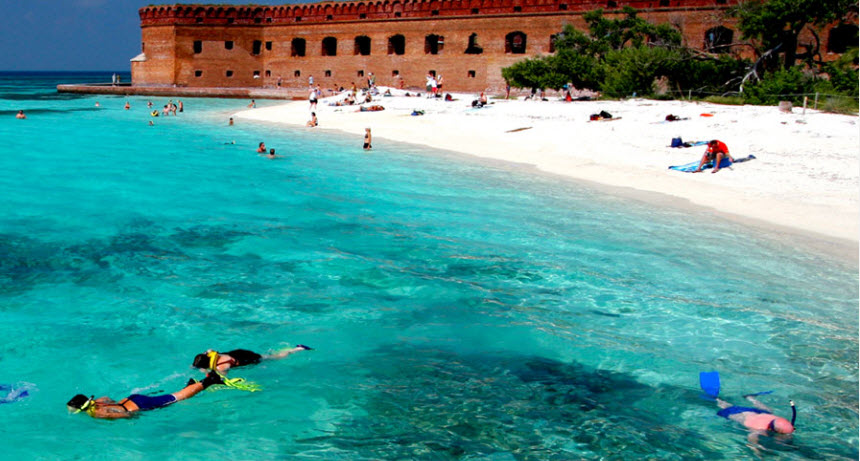 Loggerhead Key is located three miles from Garden Key and is the largest island of the Dry Tortugas, covering about 49 acres. It is the site of the historic Loggerhead lighthouse, constructed in 1857. It was also the location of the “Tortugas Laboratory”, built and operated by the Carnegie Research Institute, for tropical research, from 1904 until 1939. Loggerhead Key allows public access 365 days of the year, but unlike Garden Key it's restricted to day to dusk activities only. Here you'll find more shipwrecks perfect for exploring with your snorkeling gear.