Bermuda Doesn’t Have To Be An Out-Of-Reach Destination

Comprised of 181 islands, islets and rocks, Bermuda is an angler’s paradise surrounded by azure seas and lively coral reefs that are teeming with marine life. An abundance of marlin, wahoo and tuna can be found just a short run offshore so it comes as no surprise that the waters of Bermuda are a haven for big-game fishermen, the world over. Not only is this island chain appealing for its stellar sportfishing opportunities, it is also easily accessible from the United States by boat. We spoke to veteran Bermuda traveler and angler, Captain Trey McMillan, who gave us the details on what it takes to travel to Bermuda and hook up with tournament winning fish. 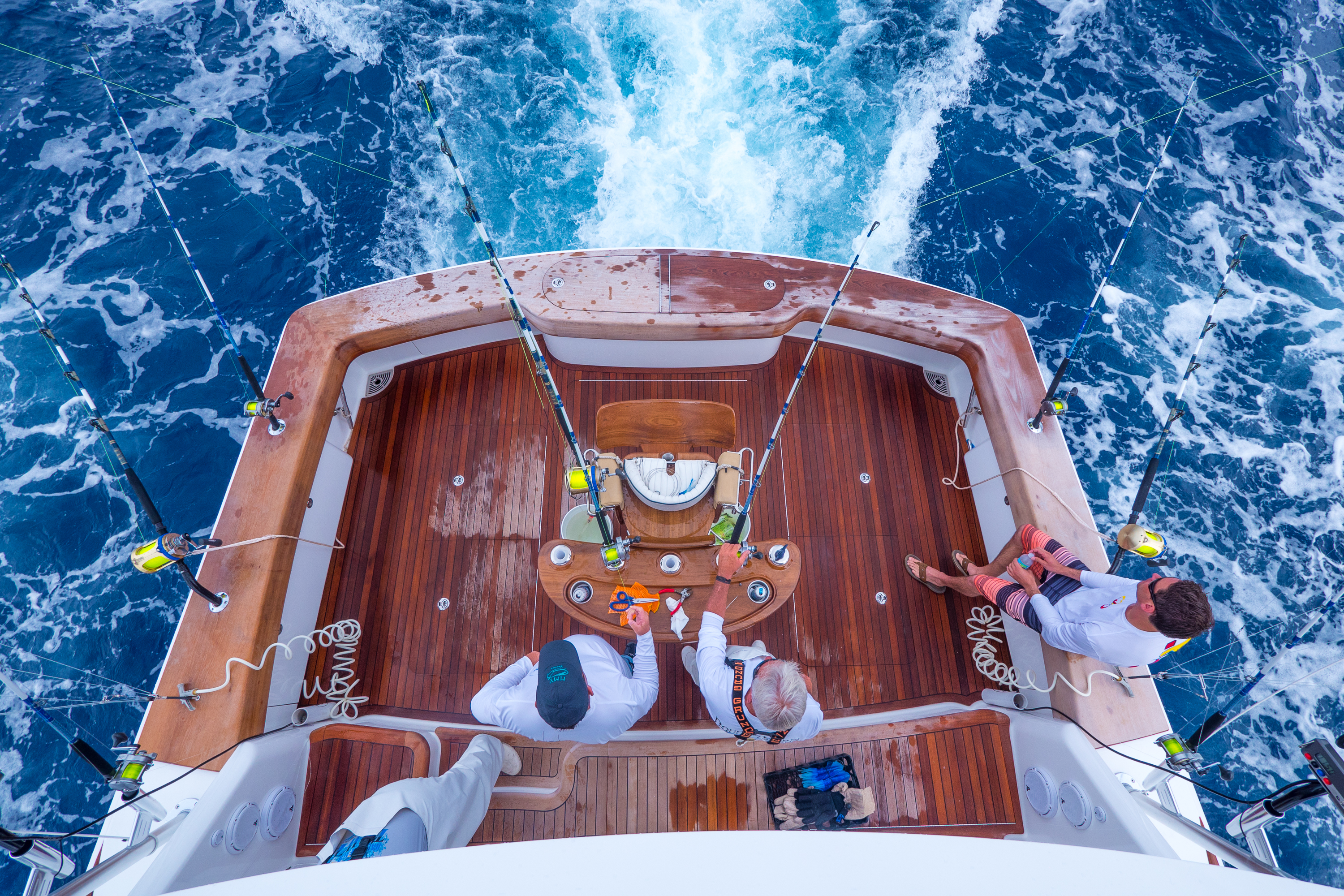 Before you have the fishing experience of a lifetime, you have to make the crossing to Bermuda first. The months of October - March provide the calmest seas for the trip. Any sportfish yacht, like a Viking Yacht for instance, could easily handle the job of traveling to Bermuda. Captain Trey, runs Game On, a 66 Spencer Sportfish out of South Carolina (Owner: Sea Hunt Yachts), and says that the most direct route that people commonly take out of South Carolina to Bermuda is departing from Beaufort Inlet in and heading straight to St. George Town, Bermuda. This route is approximately 660 nautical miles and takes about 3 days and 2 nights to complete. A 2100-gallon fuel tank on the 66 Spencer paired with an additional 500 gallons of fuel allows Captain Trey to head straight through when travelling to Bermuda. A second common and direct route from North Carolina departs from Cape Hatteras out of Oregon Inlet straight to Port of St. George's for a distance of 580 nautical miles. Anglers leaving from Florida have a greater distance to travel and tend to stop at the North End of the Bahamas to top off on fuel. For example if you are leaving from Miami, FL your distance in nautical miles will be a little under 900. Of course, there are plenty of other areas throughout the eastern seaboard from where you can start your journey. 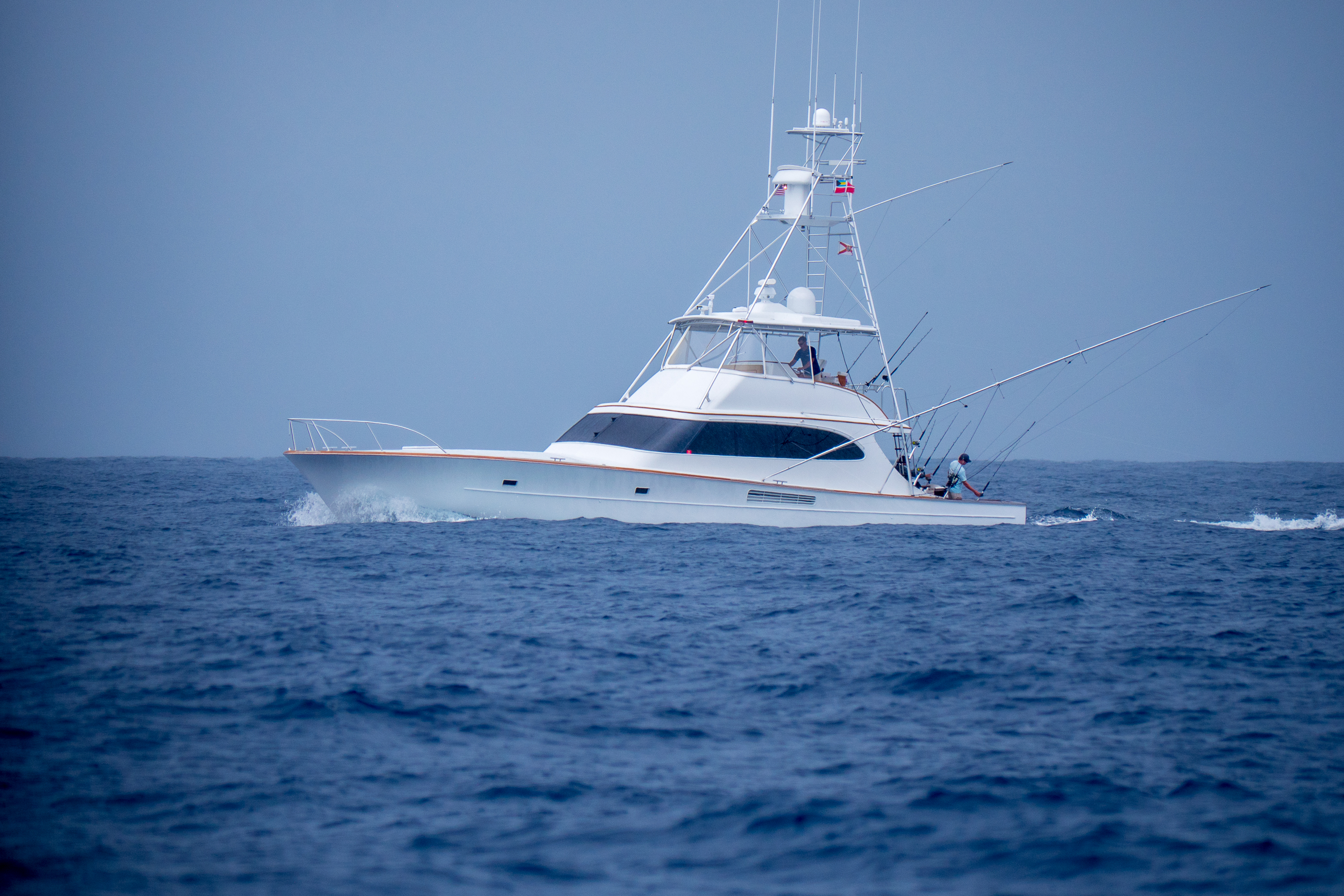 When approaching Bermuda from the North, remember that reefs extend up 10 feet from the island in this direction so it is advisable to keep well to the east and approach St. David's Head on a course of 226 degrees. When approaching from the South, St. David's Head should be safely passed at a distance of one mile or more keeping at 225 degrees until St. Catherine's Point changes course to 290 degrees. No matter where you are leaving from in the US, your point of entry in Bermuda will always be entering St. George's Harbour through Town Cut Channel where customs is located at the northeast corner of Ordnance Island. Once you complete the customs process at Ordnance Island you can then head on to whatever location you'd like. Captain Trey is usually headed to Hamilton City, Bermuda’s capital.

Captain Trey provided us with a list of four full-service marinas that he will typically stay at when fishing in Bermuda.

If you're interested in staying in a town other than Hamilton, you can find a complete list of available marinas here.

“Everyone goes over to Bermuda to catch the fish of a lifetime,” said Captain Trey, and with an abundance of big-game fish calling these waters home, your odds of successfully hooking up with a sea monster are pretty good. From May – October fishing is hot for wahoo, yellowfin tuna, and marlin. Peak season is June through August for landing a Bermuda blue. A good number of white marlin here too. There are two well-known hot zones when looking for Marlin, the Challenger bank at just 12 miles offshore and Argus banks located 20 miles offshore. 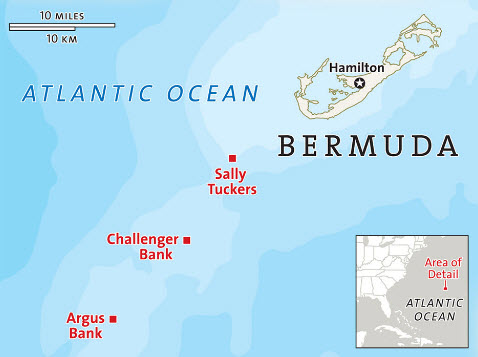 The challenger bank rises from incredible depths of 6,000 feet to just 180 feet. Powerful currents push baitfish against the plunging banks and the marlin, Wahoo and tuna are always following in pursuit. Marlin have been caught every month of the year in Bermuda but fishing for this species is best during summer when the water reaches temps of 80 degrees. For marlin bait, Captain Trey says he prefers to use a lot of artificial rigs but will also bring along mullet, mackerel and ballyhoo from home. He of course uses heavy tackle, 130’s with the biggest hook and biggest leader he can get his hands on. Captain Trey always keeps dredges in his arsenal and will use them depending on their speed and location. Find out about proper dredge technique here. Not every marlin you tangle with will clock in at 1,000 pounds but a 400 pounder is nothing to turn your nose at and you have to be prepared for any size. 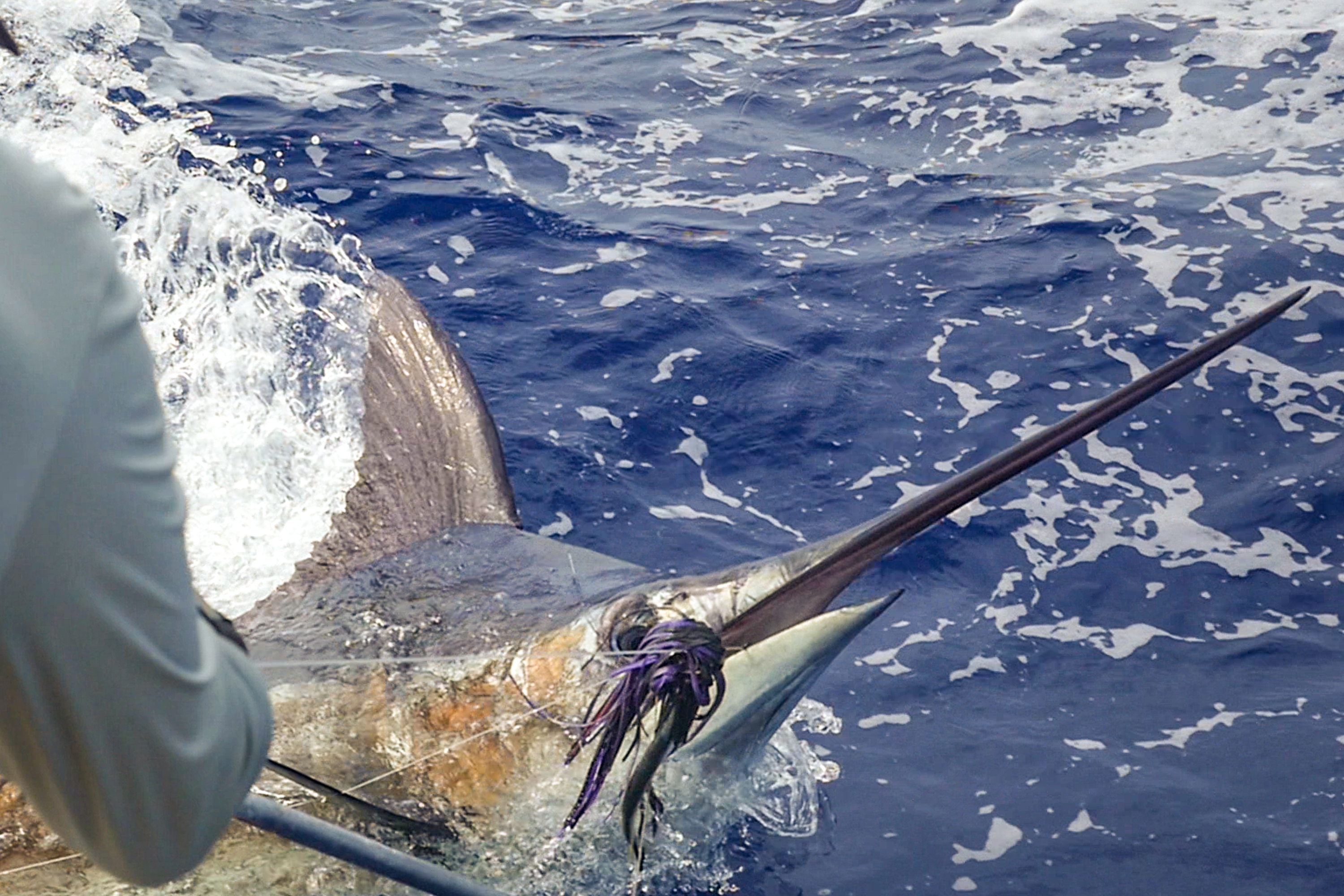 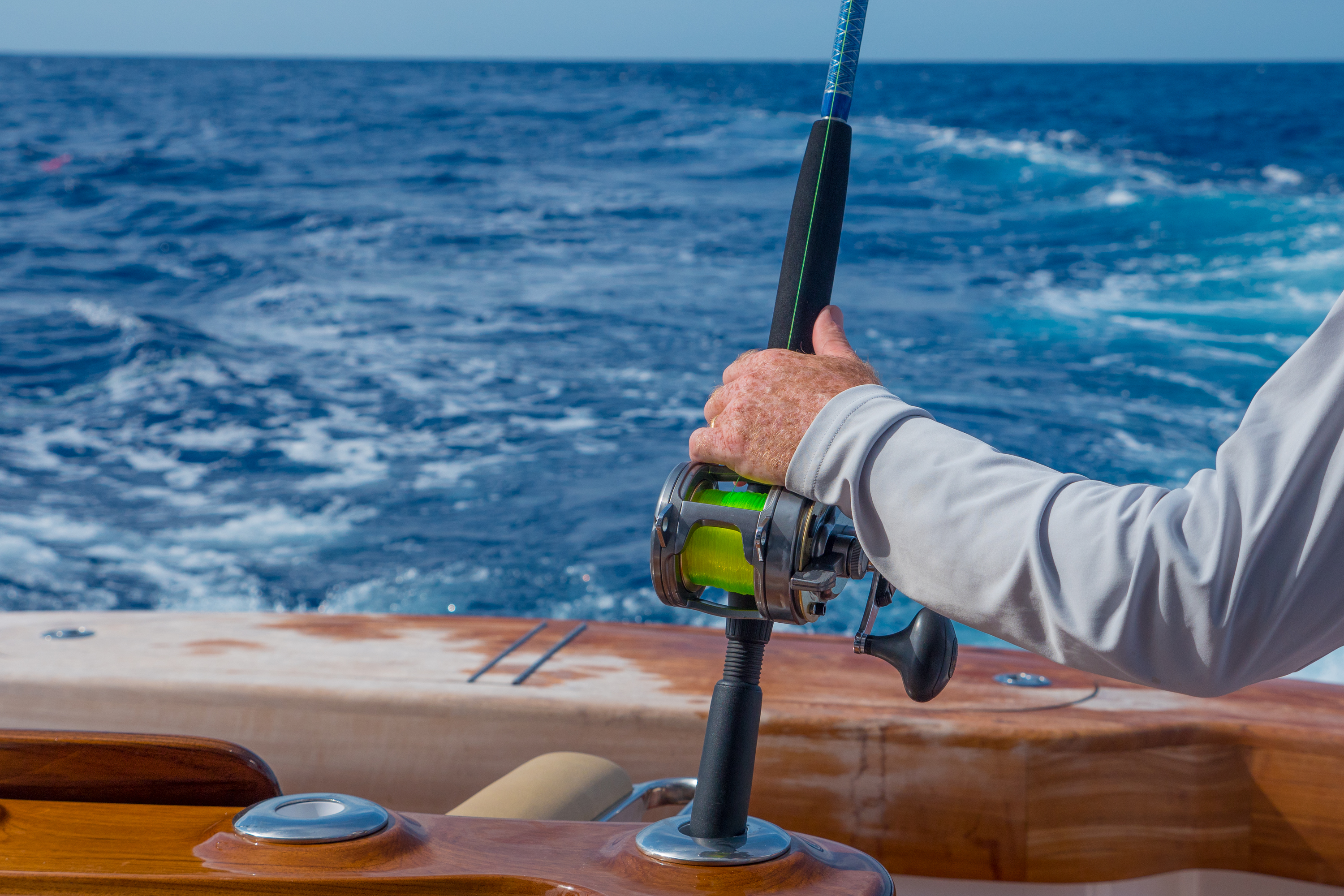 While blue marlin fishing is certainly the pinnacle of big-game fishing in Bermuda, catching wahoo and tuna can be just as much of a thrill. You can start chasing wahoo in late spring. Wahoo, which are one of the ocean’s fastest species and some of the best eating fish around, can grow up to a whopping 100 pounds in Bermuda. Yellowfin Tuna become plentiful in May and June and again in September and October. Weighing up to 200 pounds, these tunas put up tremendous and fun fight. If you want to take a break from offshore fishing for a day, you can expect to find action on the many reefs that are scattered throughout the Bermuda waters. You’ll catch a range of snapper species, triggerfish, porgies and more. Bermuda is regarded as one of the only places to do flats fishing for hogfish. Good bonefishing can be found on the north side beaches of the island during the summer but they move away in the winter months. 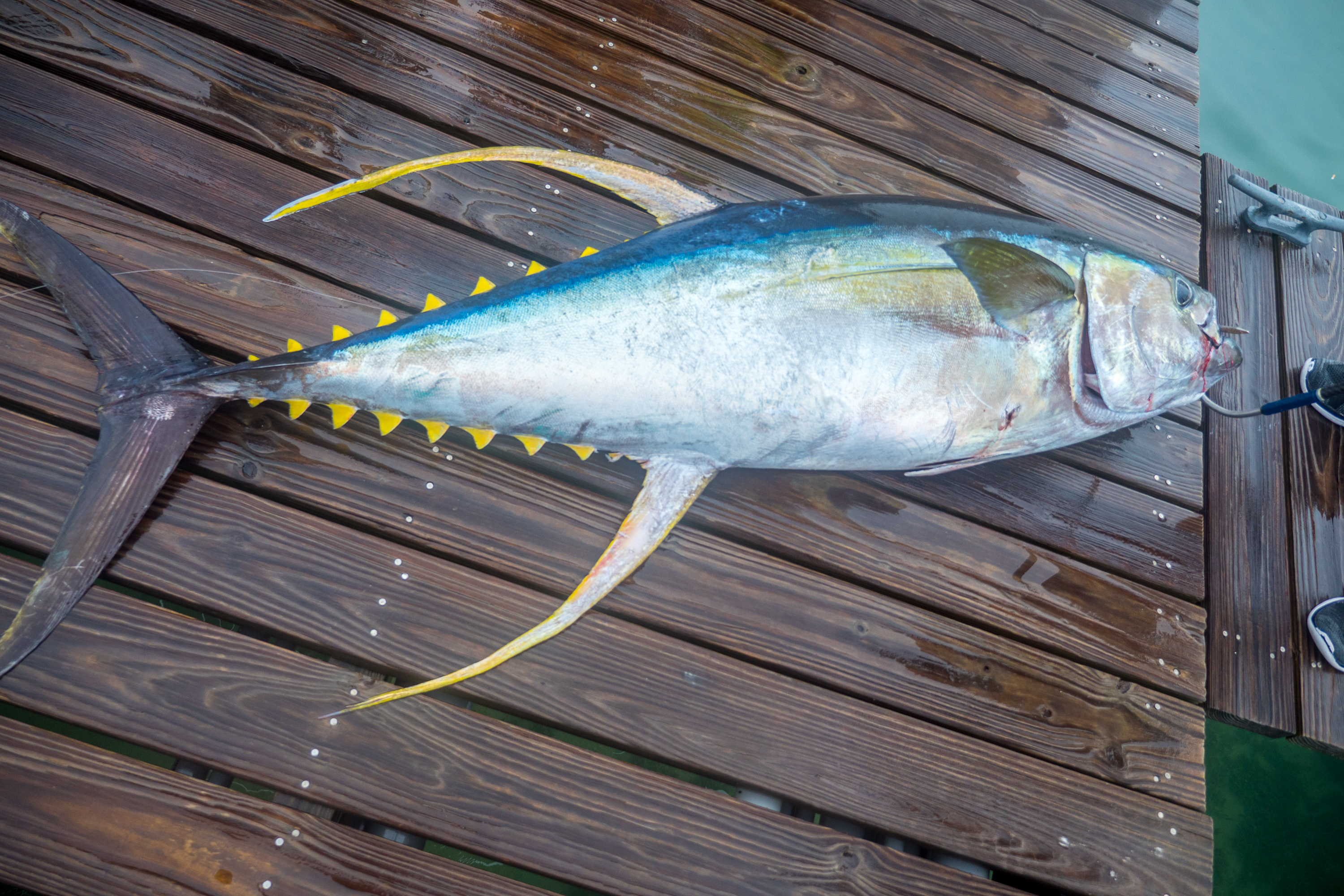 If you want to center your trip to Bermuda around a fishing tournament, you have several fantastic and exciting opportunities to do so.

Boats and participants competing in the above tournaments are eligible for the Bermuda Triple Crown Billfish Championship 2017. There is no additional entry fee to compete in the championship. Rules: All participants competing in the BTC championship must follow the rules governing each qualifying tournament. Boats earning points do not have to use the same participants/anglers at each event. The sum of all official points earned at each qualifying event will determine the total points awarded for the Championship. The boat with the highest total points will win the series. In the event of a tie the boat accumulating the points first will be the champion.