An Inside Peek At The Visionary Behind OKEAN Yachts

Beginning with the launch of the OKEAN 50 Flybridge Motor Yacht at FLIBS 2017, and continuing with an expanded lineup consisting of the 55 Sport, 80 Motor Yacht, 50 X, and 68 Motor Yacht, the international collaboration that is OKEAN Yachts has turned heads around the globe with their innovative design breakthroughs, particularly their “Open Up Your World” design.

When HMY debuted the ground-breaking OKEAN 50 Motor Yacht at FLIBS, it stopped an attendee in his tracks and led to the sale of hull #2 on the third day of the show.

In an industry loaded with legacy brands, it’s hard for a new builder to make such an immediate splash. Yet that’s precisely what happened. And it begins at the top with a serendipitous owner. 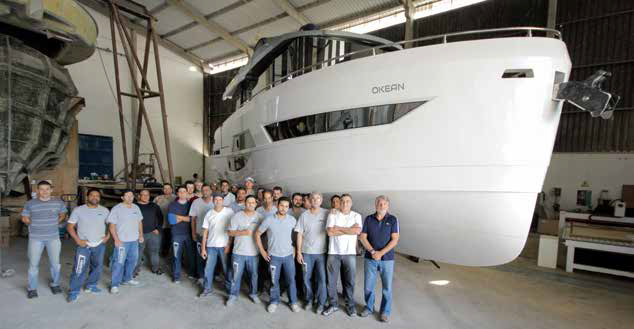 You may assume the man behind the sudden and fascinating success of OKEAN is a longtime yachting industry veteran. But that is not the case.

Nercio Fernandes is a successful software entrepreneur from Brazil whose love of yachting and wanting to create something truly special led to his leap of faith of designing and building his own vision of a contemporary power cruiser.

An experienced yachtsman, Nercio had previously cruised his 37-footer from Miami to his home east of Sao Paulo, Brazil, a trek of more than 4,000 nautical miles. In 2012, he purchased a new 60-foot Princess from HMY Yachts in Miami, and this was when the dream really began taking shape.

In 2015 he decided the time was right to fulfill his dream of building his own power cruiser. He had a clear idea of what it should be – contemporary design, capable of excellent performance at both displacement and planing speeds, with a sense of openness and connection to the sea. 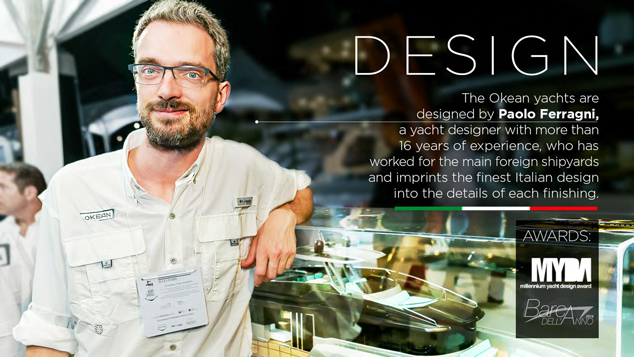 Even with his yachting experience and business acumen, Nercio knew he needed to assemble a world-class team to build, market, sell, and service his new creations.

At his disposal was a waterfront, ocean-access boatyard facility with more than 300,000 square feet of interior space just east of Sao Paulo.

To make inroads in the U.S. market, Nercio knew he needed a trusted partner on the ground to not only market, sell, and service his yachts, but also provide consultation on certain construction components to cater to U.S. consumers.

Having taken delivery of his 60’ Princess from HMY, he was intimately familiar with their operations, and he made the ask, knowing it would be a tough sell.

HMY is constantly approached about taking on new OEMs. But this was different. HMY knew Nercio and his love for motor yachts and he came to them with a fresh, versatile concept (and a famed designer). After doing their due diligence, HMY was on board – impressed not only by the design but with Mr. Fernandes’ financial capability to make a project like this work.

HMY played an integral part in the launch of the brand as the exclusive distributor in North America, the Caribbean, and Latin America (north of Panama). HMY was also charged with overseeing the use of as many U.S. components as possible and making sure that the whole line they offered was U.S.-friendly, including layout, finish, and many other details that concern boaters in the States.

And while OKEAN provides the warranty on its boats, HMY stands behind it, helping raise U.S. consumer confidence in the brand. 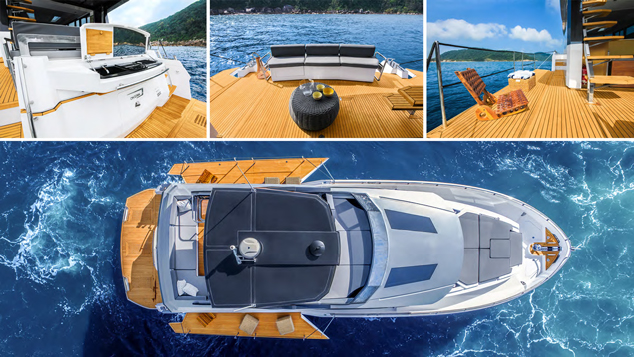 The collective knowledge of this powerhouse team led to several creative, awe-inspiring features that are built to entertain and create a halcyon connection with the sea, all centered around the “Open Up Your World” design concept. Two of the most striking are the expandable hull balconies—push a button, nearly double your exterior deck space—and a 360-degree salon view that provides unobstructed panoramic sight lines.

And there is absolutely no compromise on craftsmanship. It’s at a world-class level, featuring a high-quality contemporary interior, and everything under the skin, such as sound insulation and electronics, is also top notch. 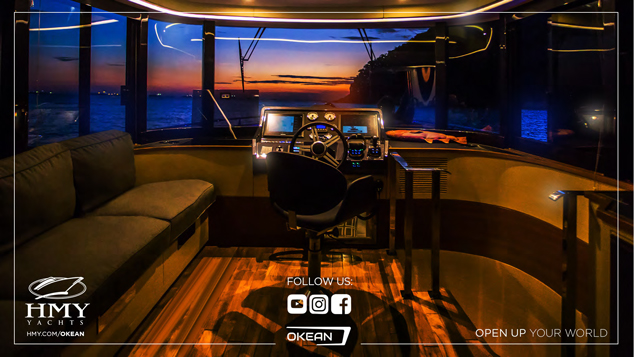 The HMY-OKEAN partnership started strong and continues to get stronger, with HMY leadership actively participating in OKEAN’s future growth and development.

Now is the time to view these exceptionally unique yachts before the waiting list gets too long. Contact HMY today to learn more: 561-961-8600