When you buy a pre-owned Viking, you aren't just purchasing a boat- you're carrying on a legacy. "China Time," a 2012 70' Viking Enclosed Bridge Convertible, has a history that is nothing short of distinguished. Originally commissioned as the infamous "Fa La Me," she's won multiple fishing tournaments, including the Bermuda Triple Crown, Bahamas Billfish Championship, and the Casa De Campo International Blue Marlin Classic where she raised a dozen blues to take first place. China Time is only a two owner boat, most previously maintained fastidiously by a full-time professional crew.

Powerful yet fuel efficient twin 2,600 hp MTU engines churn through seas for unbelievable acceleration, and the Viking Independent Programmable Electro-Hydraulic Rudder (VIPER) system provides unmatched maneuverability in her class. Her top speed is 44 knots, she cruises comfortably around 30, and idles at 6.6 knots with one engine in gear to provide a very clean wake for trolling. 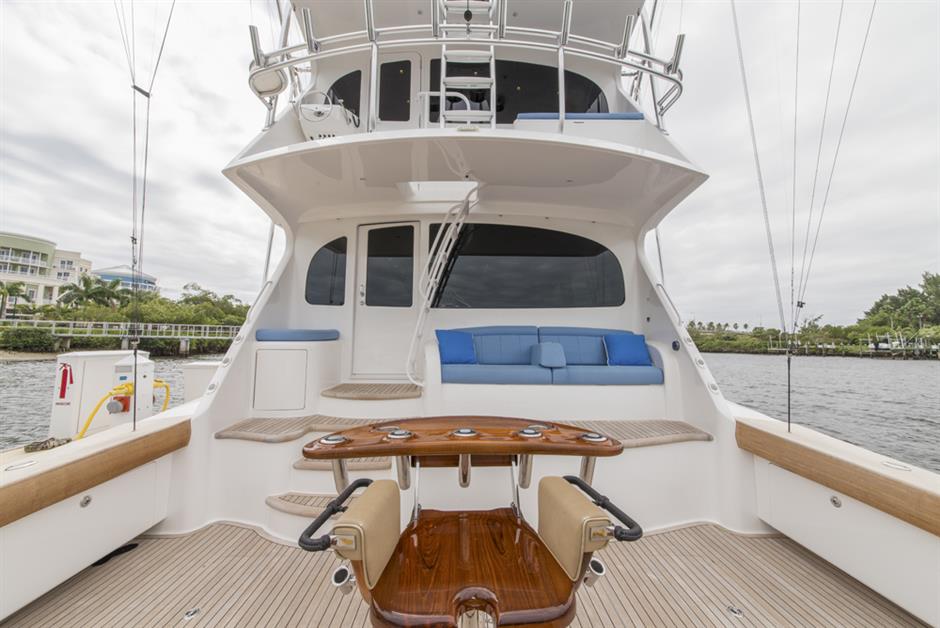 The cockpit of this 70' Viking sports rounded corners in every aspect, Viking's signature upholstered mezzanine seating with air conditioning jets, and an abundance of storage options including separate fridges for bait, food, and drinks, two large in-deck storage boxes, removable tuna tubes, an on-deck fish box and livewell, and rod storage lockers under coamings. You'll never run out of ice with two Eskimo ice machines, and you'll reel in plenty of whoppers from the Release Marine fighting chair with an offset pedestal and rocket launchers. The enclosed flybridge hosts a Subzero freezer on the aft deck, a fresh water outlet, and four MIYA EPOCH electric teaser reels to tempt nearly every big game species in the world.

Much like the cockpit, the 70' Viking tower's piping on the flybridge, done by Palm Beach Towers, is all rounded for a very attractive look, and entering and exiting the flybridge feels very secure. Nav controls reside on both sides of the helm steering pod, and the scalloped centerline brow provides optimum visibility for the Captain. 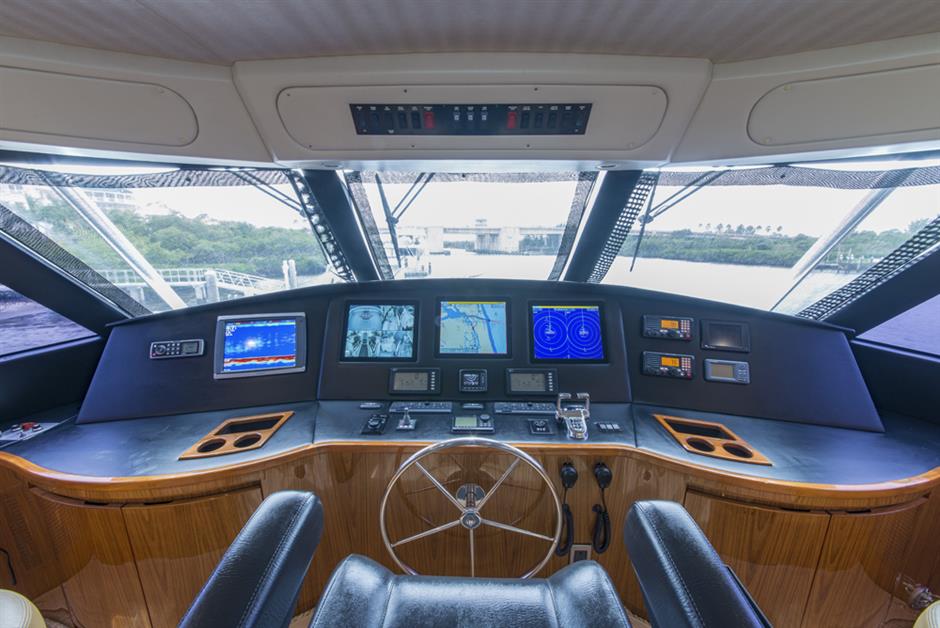 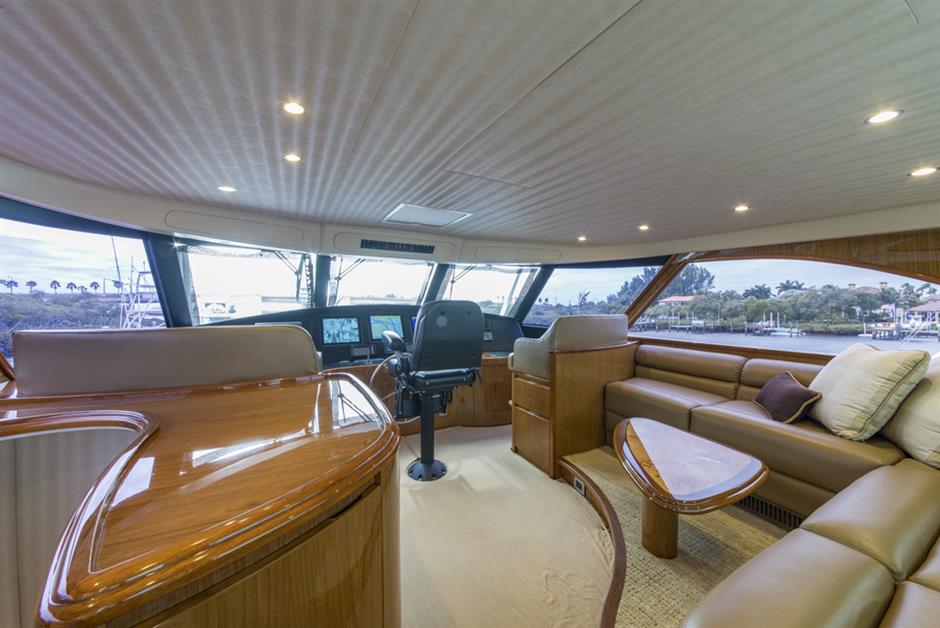 From behind the fierce Viking signature black mask windshield, the enclosed flybridge on this 70-footer invites those worthy to sit in her custom-upholstered Stidd helm chair behind a novel ship steering wheel. Guests can lounge on the second L-shaped couch on the ship to watch the 21" flat screen TV or keep Captain company. This enclosed flybridge is supplemented by an aft control station including a Furuno Navnet 3D 8.4" LCD network, ICOM 412 VHF, Simrad autopilot 24, bow thruster, and COMMANDMIC. 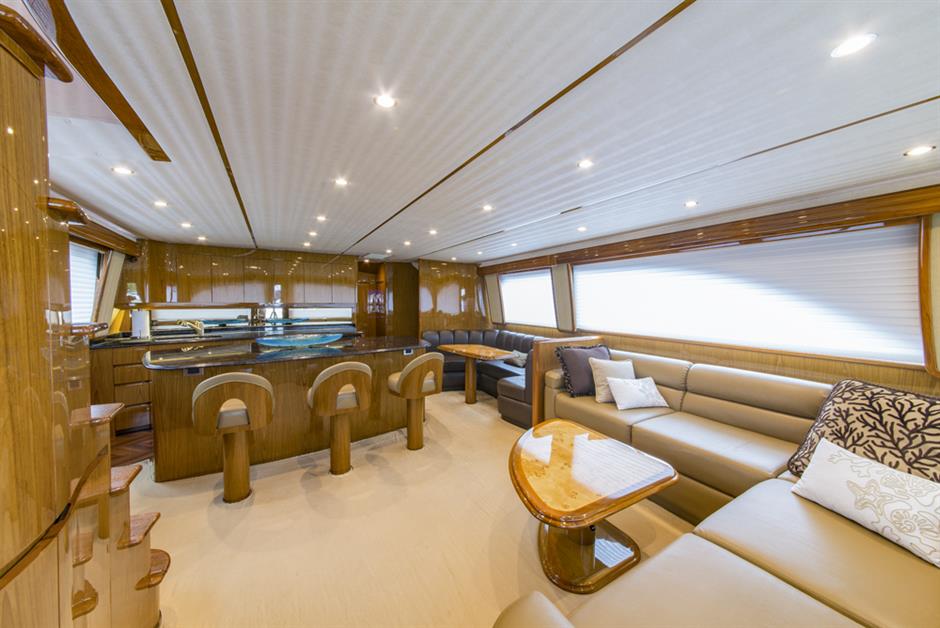 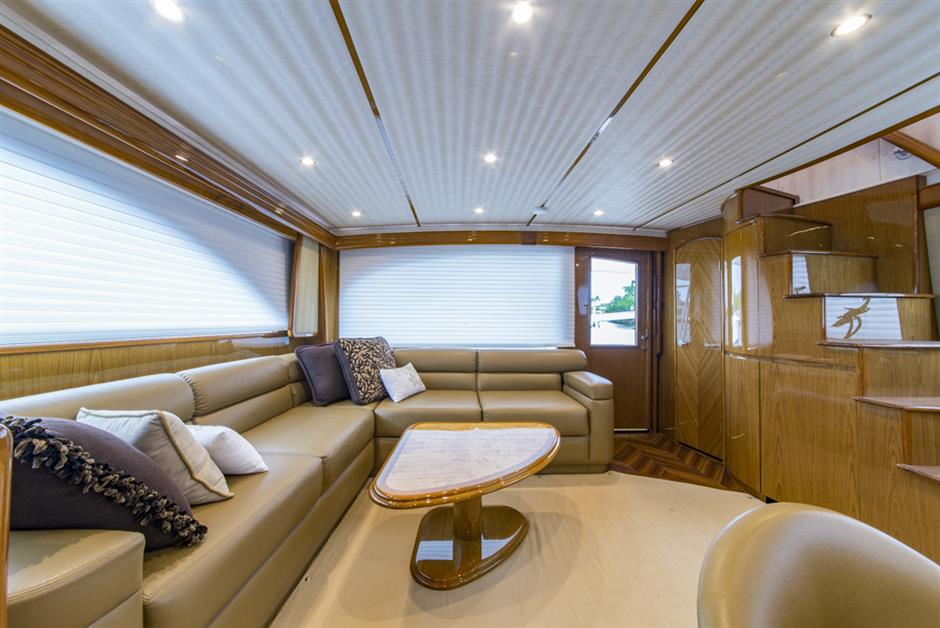 The Viking 70' EB somehow has just as much interior to offer as the Viking 74'. You'll feel right at home as the salon door opens with the push of a button and welcomes you into an open floor plan drenched in high-gloss teak featuring an extra-long ultra leather L-shaped sofa with a pop-up HDTV and Bose home theater surround sound. Conveniently located near the cockpit is a day head directly portside to the salon door for fisherman who don't want to rush forward between bites. 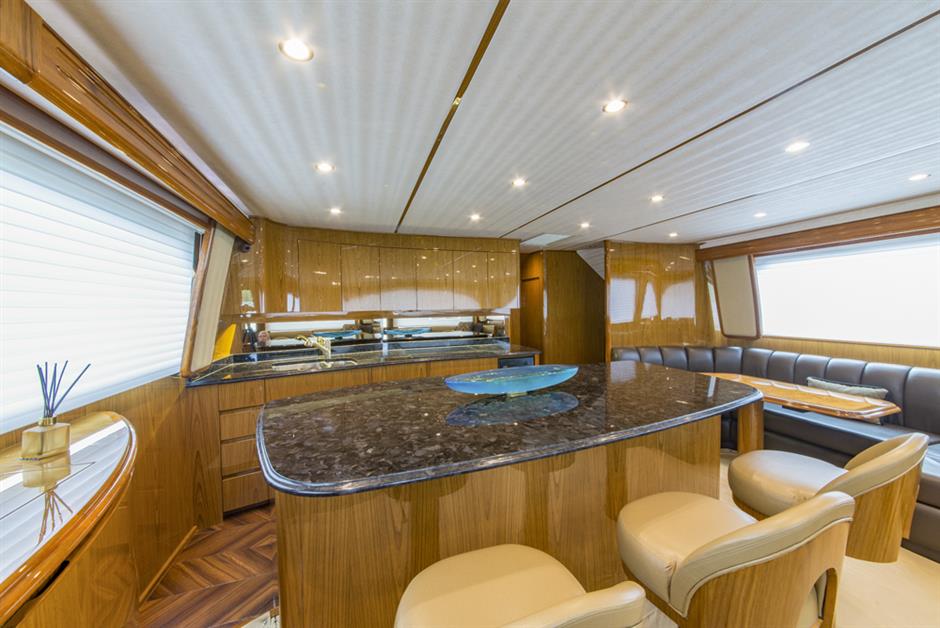 This 70' Viking features an island galley with barstools, granite countertop, a wrap-around dinette, a 6-drawer Sub Zero refrigerator and freezers, 4 burner electric range, garbage disposal, microwave, and a trash compactor. If that wasn't enough, there's a walk-in pantry with an extra freezer in case you've had an extra-abundant day on the water. 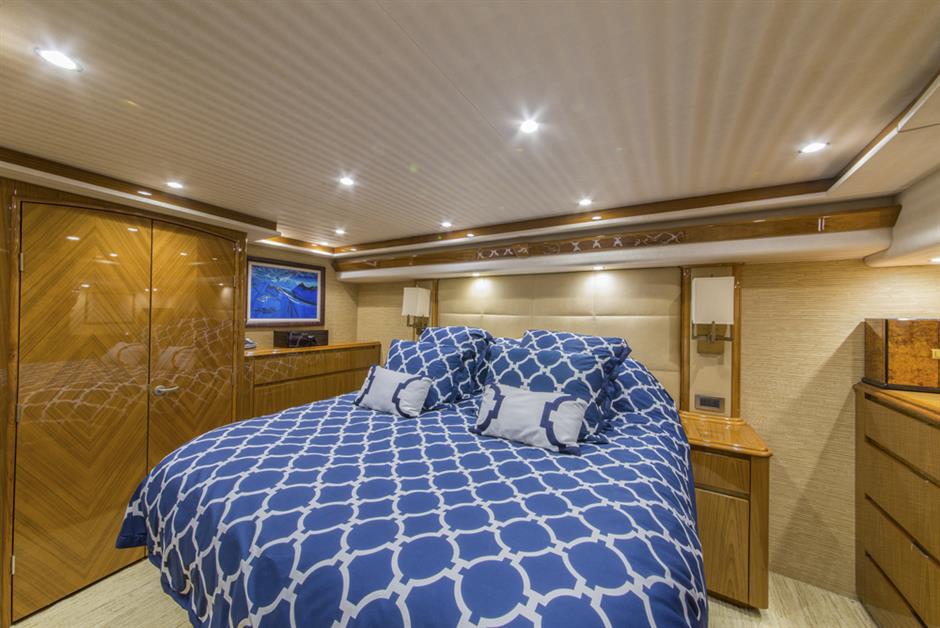 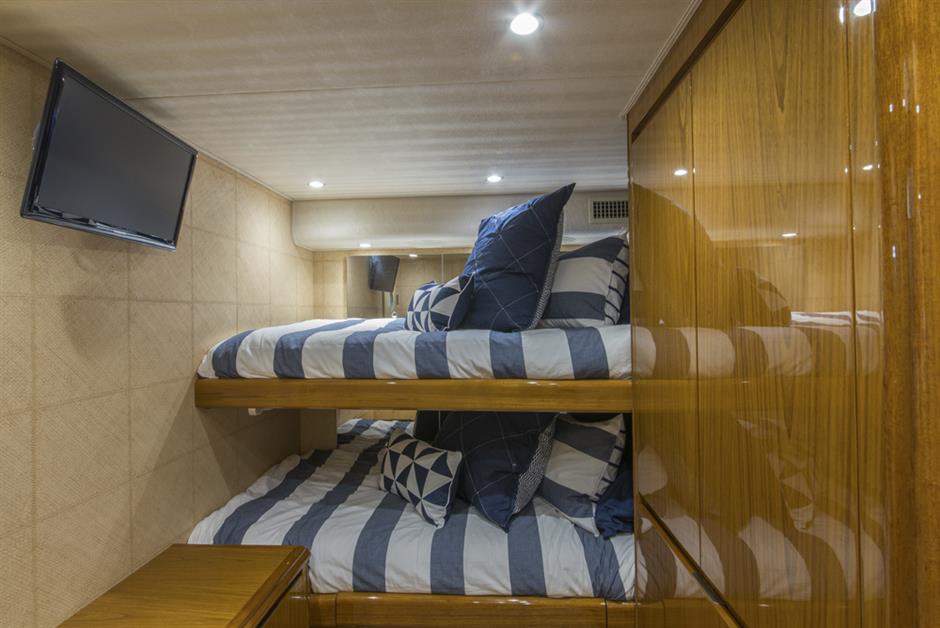 This Viking 70' EB affords a master stateroom with a king-sized bed, 40" flat panel TV, Bose home theatre system, his and hers closets, full-sized mirror, LED lighting, stereo, DVD player, lots of storage, a master head en suite with a granite vanity, and a large shower with a one-piece glass door. In fact, all four staterooms including the crew's have a designated head, making a total of 8 sleeping spaces and 5 heads including the day head in the salon. The forward stateroom provides an island queen-sized bed, 26" flat screen TV, DVD player and of course, an en suite head and more storage. Viking bunks are notoriously larger than competitors, with full-sized twins even in single-berth cabins. 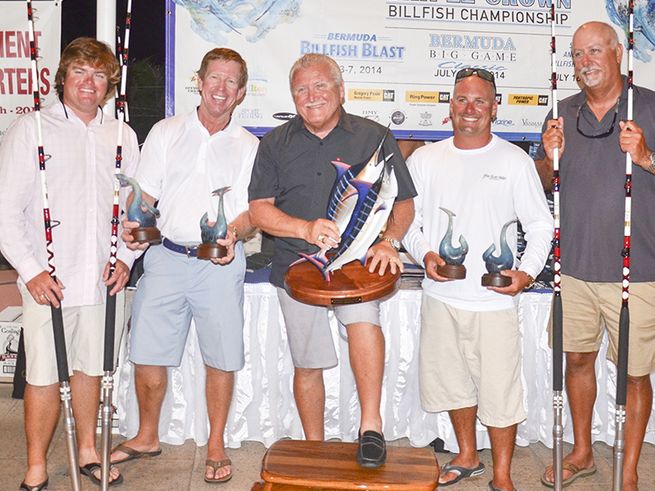 If you're looking for a sportfish yacht known as a tournament dominator, "China Time," our 2012 70' Viking Enclosed Bridge, is your girl. Originally commissioned as the "Fa-La-Me" until her owners traded up for a 92' Viking EB, she's demonstrated her ability to rule the sportfishing circuit, and she's ready to raise more fish!