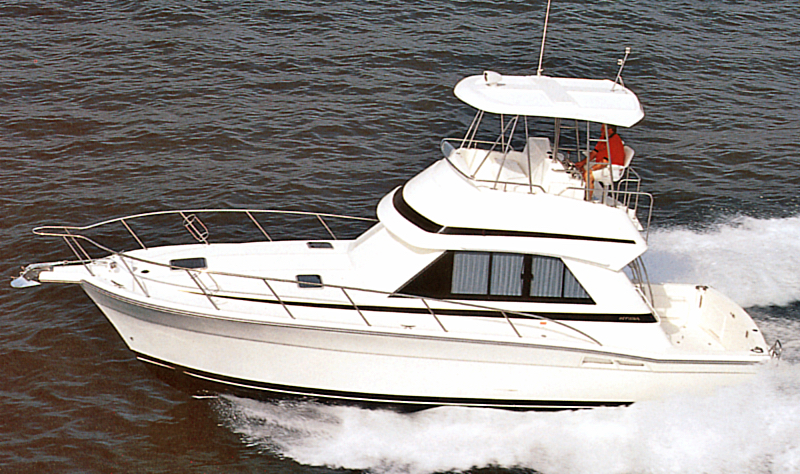 Name: 36 Convertible
Length: 36'0"
Hull Type: Modified-V
Gross Weight: --
Fuel Capacity: 324/420 gals.
Model Years: 1994—2002
Draft: 3'5"
Beam: 13'5"
Water Capacity: 119 gals.
Waste Capacity: 30 gals.
Length w/ Pulpit: --
The Riviera 36 Convertible’s classic styling, rugged construction, and bargain price (thanks to a favorable exchange rate against the Australian dollar) made her a strong contender in the midsize convertible market of her day. Hull construction is solid fiberglass, and like all Riviera convertibles she was designed with a forward collision bulkhead and watertight compartments for an extra margin of safety. Riviera produced the 36 in both a single-stateroom and twin-stateroom layout. In the single-cabin interior, the starboard sofa in the salon converts to upper and lower berths, and the dinette converts to sleep two. Opposite the step-down galley is a large head with separate stall shower. A lower helm is standard in the two-stateroom version, and the guest cabin features over/under bunks and hanging locker. Note that the cockpit and salon in the single-cabin interior are larger and so is the forward stateroom. With either layout, a transom door, tackle centers, and engine room access hatch are found in the cockpit. The Riviera 36 will cruise in the low 20s with 315hp Cummins diesels. Optional 370hp Cummins diesels cruise at 25 knots (28–30 knots top).