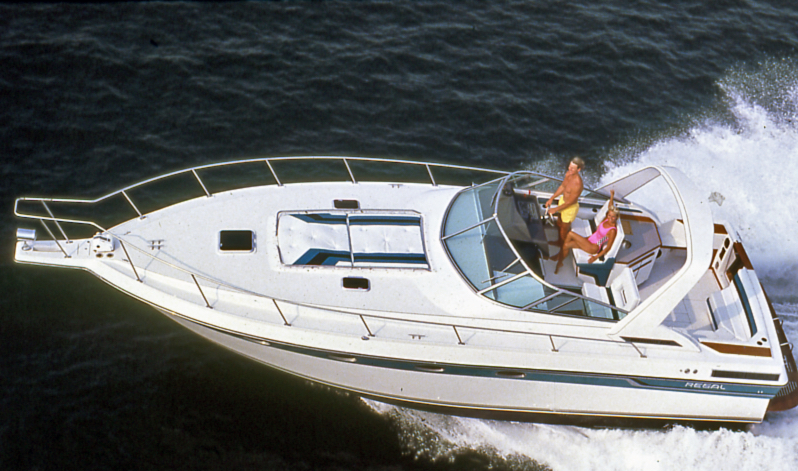 Name: 360 Commodore
Length: 36'1"
Hull Type: Modified-V
Gross Weight: --
Fuel Capacity: 280 gals.
Model Years: 1985—1990
Draft: 2'10"
Beam: 13'1"
Water Capacity: 125 gals.
Waste Capacity: 65 gals.
Length w/ Pulpit: --
Introduced in 1985, the Regal 360 Commodore was the largest boat in the Regal fleet during her production years, and one of the more popular big express cruisers of her era. By combining a streamlined design with a spacious interior, designer Jim Ginter sought to make the Commodore sophisticated enough to suggest performance, yet functional enough for extended cruising. Built on a solid fiberglass hull with prop pockets and a relatively wide beam, the midcabin interior of the Regal 360 sleeps six with double berths fore and aft and a convertible salon dinette that sleeps two more. The forward stateroom is a bit unusual in that the berth is oriented diagonally, a design that frees up additional space in the salon. A big semicircular sofa dominates the salon, and the head is divided into two sections with the sink/vanity forward and the standup shower compartment with toilet aft. A highlight of the 360 Commodore is her wide-open cockpit with its U-shaped lounge seating, double-wide helm and passenger seats, and full wet bar. A bow pulpit, teak swim platform, transom door, and foredeck sun pad were standard. MerCruiser 340hp gas inboards cruise the Regal 360 at 20 knots and reach a top speed of around 28 knots.