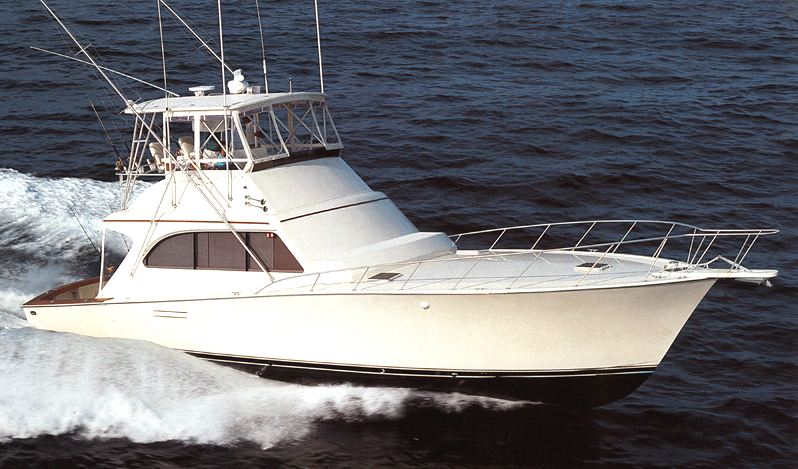 Name: 50 Convertible
Length: 50'7"
Hull Type: Modified-V
Gross Weight: --
Fuel Capacity: 870 gals.
Model Years: 1989—2008
Draft: 4'6"
Beam: 16'11"
Water Capacity: 240 gals.
Waste Capacity: 42 gals.
Length w/ Pulpit: --
A great-selling boat with over 100 delivered, the Post 50 combines the elegance of a yacht-style interior with the brute force of a well-bred offshore fishing machine. She’s built on a low-deadrise modified-V hull with cored hullsides, a wide beam, and a solid glass bottom. Unlike other Post designs, the 50’s hull is not tapered at the transom that helps account for her very large cockpit. Several three-stateroom, two-head floorplans were offered over the years. Like all Post models, the interior woodwork and detailing are finished to high standards. The cockpit—nearly 150 square feet in size—comes with a full array of fishing gear including a molded tackle center, cockpit controls, transom door, and direct access to the engine room (where headroom was dramatically improved in 1995 when the fuel tanks were moved aft). Note that in 1997 the flybridge was widened to the full width of the deckhouse. Among several engine options offered over the years, 735hp 8V92s cruise in the high 20s (30+ knots wide open), and later models with 860hp MANs boost the cruising speed to a fast 30 knots (mid 30s top).

Engineroom headroom increased in 1995 when fuel tanks were moved aft. Over 100 built.