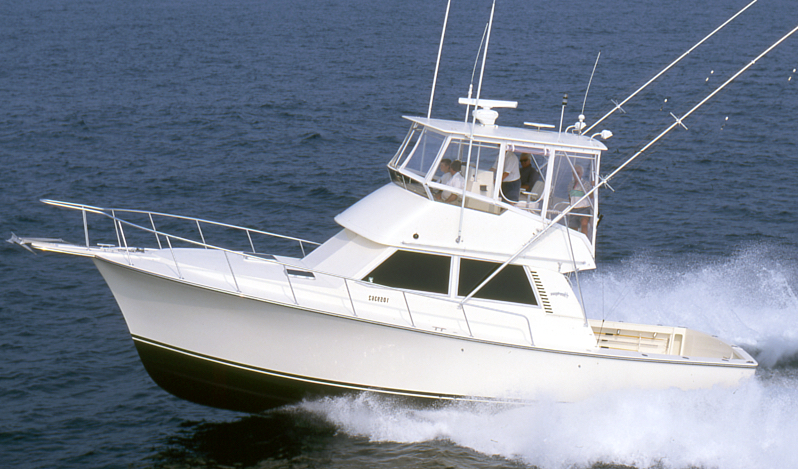 Name: 38 Flybridge
Length: 38'0"
Hull Type: Modified-V
Gross Weight: --
Fuel Capacity: 415 gals.
Model Years: 1988—2008
Draft: 3'10"
Beam: 13'10"
Water Capacity: 75 gals.
Waste Capacity: 40 gals.
Length w/ Pulpit: --
The Henriques 38 SF is a sturdy East Coast sportfisherman with a no-nonsense profile to go with her practical layout. She’s built on a conventional modified-V hull with moderate beam, a flared bow, a gently curved sheer, and Divinycell-cored hullsides. The house, deck, and cockpit are constructed in a single mold (no leaks), and with a full 140 square feet of space, the cockpit is among the largest to be found in a boat this size. Most Henriques 38s have been built with a dinette-down, single-stateroom layout, although a second stateroom (with upper/lower bunks) can be added in place of the dinette. The somewhat dark teak interior was brightened up considerably in 1996 when Henriques began using light ash interior cabinetry. A control station, transom door, tackle center, rod storage, and two 102-gallon recessed fish boxes are standard in the cockpit. Note the side-facing bridge ladder. Among several engine options offered over the years, the Henriques 38 will cruise in the mid 20s with 375hp Cat (or 380hp Volvos) diesels and reach a top speed of about 30 knots. Later models with 480hp Volvo (or 465hp Yanmar) diesels cruise in the high 20s and top out at 30+ knots.

Cockpit is reinforced for fighting chair; bridge ladder is offset to save space.