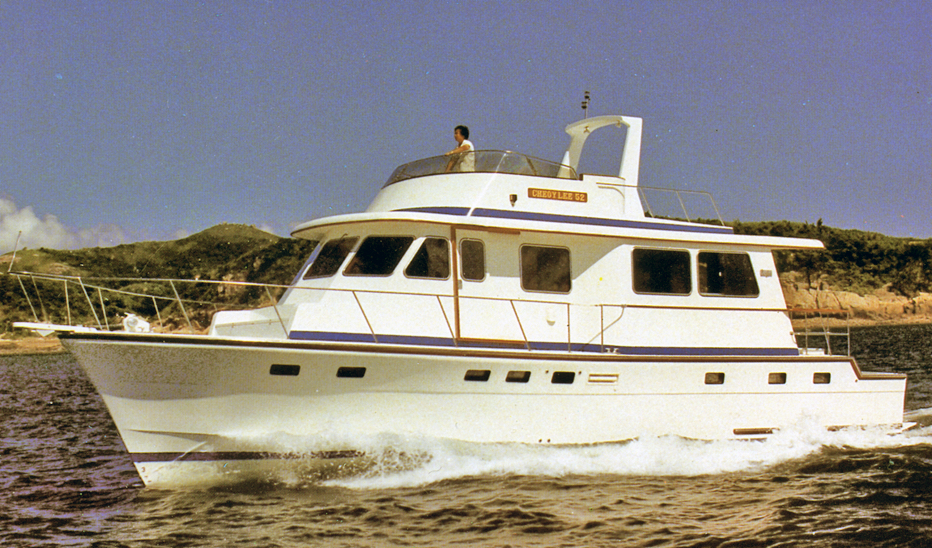 Name: 52 Efficient MY
Length: 52
Hull Type: Semi-Disp.
Gross Weight: --
Fuel Capacity: 1,000 gals.
Model Years: 1984—1994
Draft: 4'2"
Beam: 15'6"
Water Capacity: 450 gals.
Waste Capacity: 100 gals.
Length w/ Pulpit: --
Introduced in 1984, the Cheoy Lee 52 is a blend of two things that never go out of style—trawler economy at lower speeds and the planing-speed ability to run with most motor yachts. She was built on a solid fiberglass hull with a round bilge, deep forefoot, a sprayrail that runs aft to reduce roll, and a long keel. The original galley-up, three-stateroom layout of the 52 was updated in 1986 to include a spacious VIP guest stateroom with a walkaround queen bed; other than that, the floorplan remained essentially unchanged during her production years. Principal features include a full-width salon, a spacious standup engine room, a huge flybridge, and a full teak interior. The covered aft deck has space for a couple of deck chairs, and there’s a door in the cockpit for access to the master stateroom—a very useful convenience. At her 9-knot hull speed, the Cheoy Lee 52 has a cruising range of nearly 1,500 miles. Twin GM 8.2 diesels were standard and deliver cruising speeds in the neighborhood of 13–14 knots, while optional 375hp Cats cruise around 18–19 knots. (Note that a 47-foot version without the 52’s cockpit was also available.)