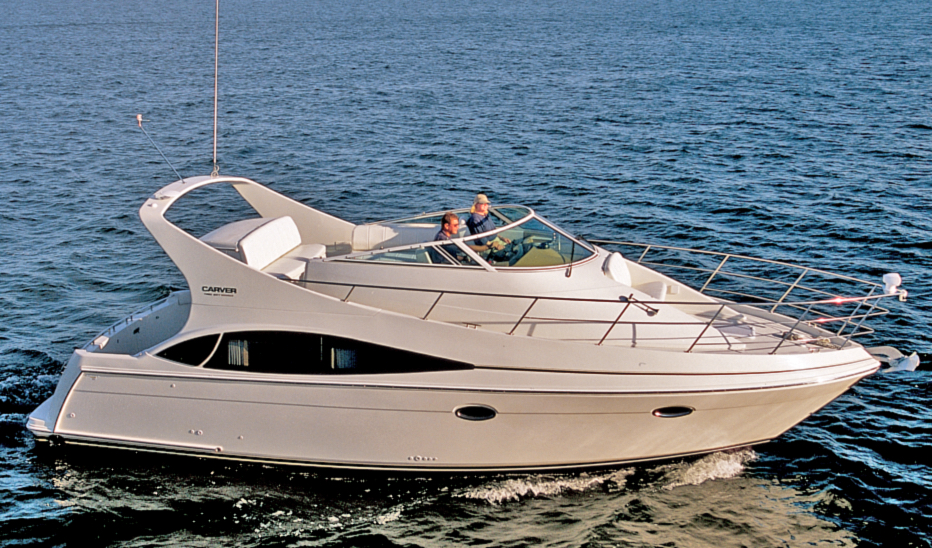 Name: 350 Mariner; 36 Mariner
Length: 36'7"
Hull Type: Modified-V
Gross Weight: --
Fuel Capacity: 250 gals.
Model Years: 1997—2010
Draft: 3'1"
Beam: 12'9"
Water Capacity: 75 gals.
Waste Capacity: 30 gals.
Length w/ Pulpit: --
Few boats have matched the popularity of the Carver 350 Mariner (called the 36 Mariner in 2004–10). She may not be much to look at, but beneath that unorthodox styling lies an enormous single-level interior that dwarfs anything in her class. Built on a solid fiberglass hull, the full-beam salon of the Mariner is made possible by elevating the side decks above the cabin windows—instead of leading aft to the cockpit, these walkways reach up to the bridge. The Mariner’s original layout features a U-shaped dinette to port in the salon, settee opposite, inside bridge access ladder, and an offset double berth in the forward stateroom. In 2004, the floorplan was modified to include a booth-style dinette in the salon, no interior ladder, and a centerline queen berth in the stateroom. Both configurations boast a large head compartment with separate stall shower. The interior woodwork is teak or cherry. In the cockpit, two stairways lead to the bridge with its wet bar, port and starboard lounges, and aft bench seat. The engine compartment (under the cockpit sole) is a tight fit. A relatively heavy boat for her size, MerCruiser 300hp V-drive gas engines cruise at 14–16 knots (about 20 knots top).