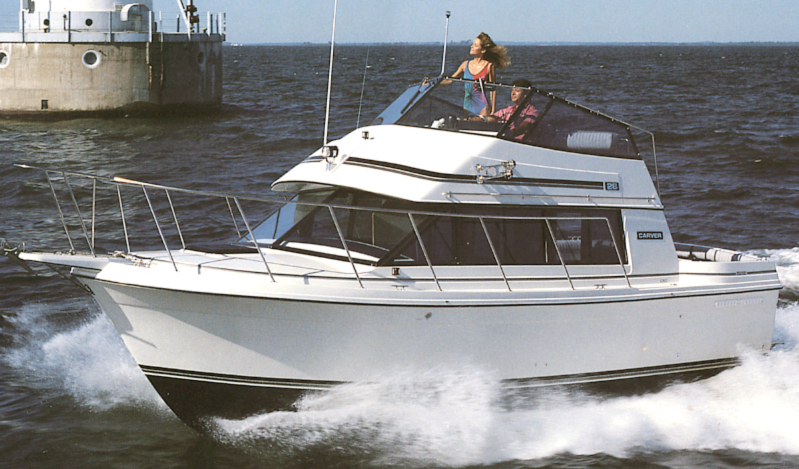 Name: 2827 Voyager; 2897 Mariner
Length: 28'0"
Hull Type: Modified-V
Gross Weight: --
Fuel Capacity: 150 gals.
Model Years: 1983—1990
Draft: 2'10"
Beam: 11'1"
Water Capacity: 51 gals.
Waste Capacity: 20 gals.
Length w/ Pulpit: --
One of Carver’s most popular models during her production years, the Carver 2827 Voyager and 2897 Mariner are what brokers mean when they talk about a lot of boat for the money. Both models look the same on the outside, the difference being the choice of interior floorplans. The Mariner has the galley and head forward, whereas in the Voyager they’re located aft, just inside the salon door. Notably, the Voyager had a lower helm and the Mariner didn’t. Both models have plenty of seating (for a 28-footer) in the salon; the head compartments are surprisingly large, and the cockpit is large enough for uncrowded swimming or diving. The flybridge on this boat is huge with seating for six and a table that converts into a full-width sun pad. (Underway, however, the weight of just a few people on the flybridge will make her very tender—guaranteed!) Additional features include a bow pulpit, transom door, serviceable side decks, and a swim platform. If there’s a downside to the Carver 28, it has to be her uneven fit and finish and a harsh ride in a chop. Standard 220hp gas engines (with V-drives) will cruise either model at 16–18 knots (mid 20s wide open).