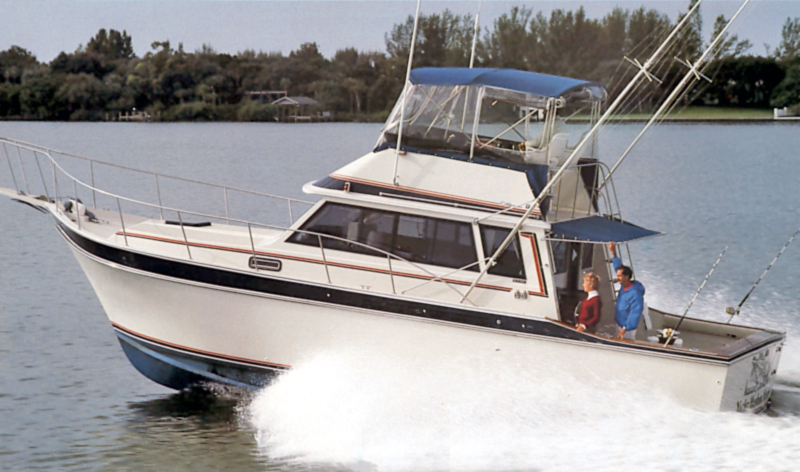 Name: 38 Convertible
Length: 37'8"
Hull Type: Modified-V
Gross Weight: --
Fuel Capacity: 400 gals.
Model Years: 1984—1987
Draft: 3'6"
Beam: 13'3"
Water Capacity: 100 gals.
Waste Capacity: --
Length w/ Pulpit: --
Designed for family fishing or weekend cruising, the Californian 38 Convertible never achieved the widespread popularity of more dedicated convertible fishing boats from Bertram, Viking and Hatteras in the late 1980s. Wellcraft built her on a solid fiberglass modified-V hull with a shallow keel—the same hull used in the production of the Californian 38 Motor Yacht. Her standard two-stateroom interior was arranged with a big L-shaped galley in the salon opposite a built-in settee. Both staterooms are fitted with double berths, and there’s a stall shower in the single head compartment. On deck, the cockpit is large enough for the occasional fishing venture, but there are no in-deck storage bins and the step along the salon door prevents the installation of a molded tackle center. Like all Californian models, the side decks of the 38 Convertible are notably wide with molded steps in the cockpit for easy access. Additional features include a bow pulpit, wraparound cabin windows, and a well-arranged flybridge with bench seating forward of the helm. Cat 210hp diesels cruise the Californian 38 at 15 knots (18–19 knots top). Larger 300hp Cats cruise at 20 knots and deliver a top speed of 24–25 knots.