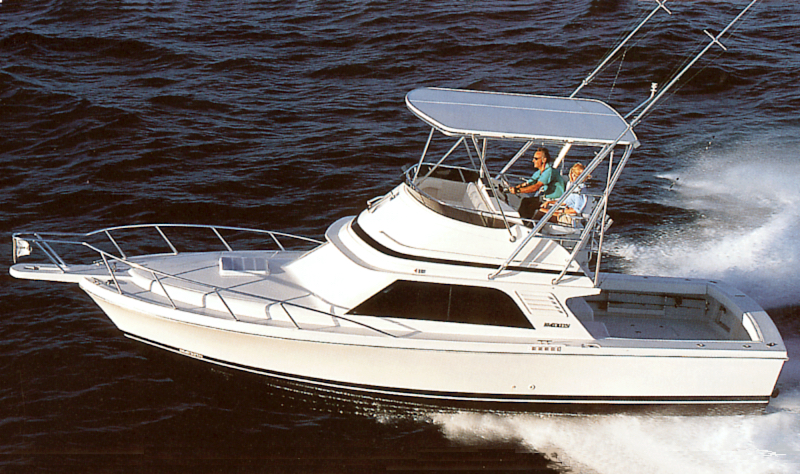 Name: 33 Convertible
Length: 33
Hull Type: Deep-V
Gross Weight: --
Fuel Capacity: 340 gals.
Model Years: 1990—1999
Draft: 2'11"
Beam: 12'0"
Water Capacity: 80 gals.
Waste Capacity: --
Length w/ Pulpit: 36'0"
Replacing the classic Blackfin 32 Sportfisherman in 1990, the Blackfin 33 Convertible is a better-handling boat in just about every respect than her predecessor—no small feat considering the popularity of the 32. Blackfin never used any coring materials in their hulls so there’s nothing high-tech here in the way of construction. Indeed, the 33 is a straightforward deep-V design with plenty of beam, a well-flared bow, and very low freeboard. Several floorplans were offered over the years, all sleeping four and having a separate stall shower in the head. Topside, the flybridge is big for a 33-footer with bench seating forward of the helm and a large console for flush-mounting electronics. Anyone who ever fished a Blackfin 32 will appreciate the 33’s enlarged cockpit and standard transom door. Engine boxes are retained in the newer model and service access is excellent. Additional features include two in-deck fish boxes, cockpit washdowns, a bow pulpit, and plenty of rod storage. Not inexpensive, twin 320hp gas engines cruise around 22 knots (about 32 knots top), and a pair of 320hp or 375hp Cat diesels cruise at 24 and 27 knots respectively and reach top speeds in the low 30s.