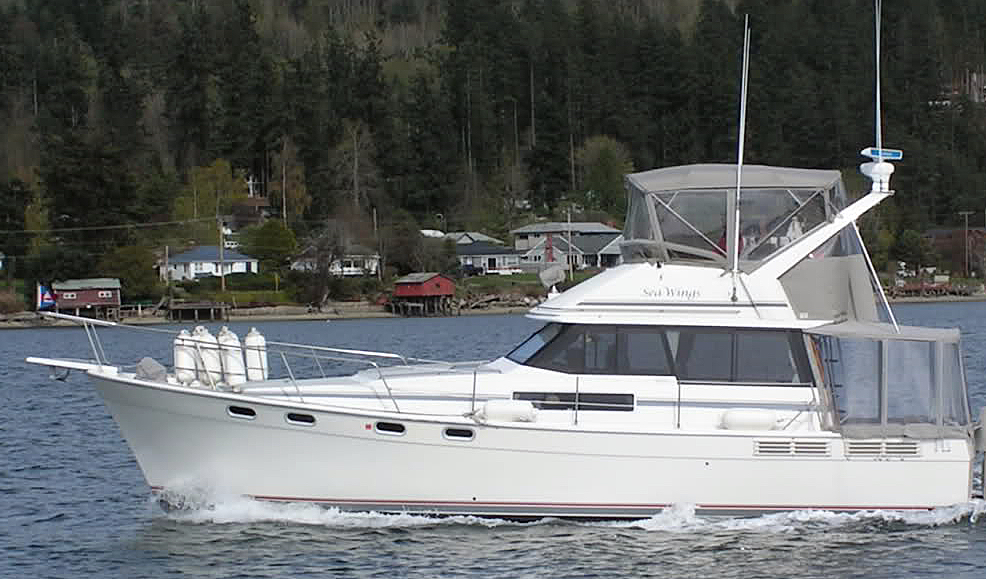 Name: 3870-3888 Motor Yacht
Length: 38'2"
Hull Type: Modified-V
Gross Weight: --
Fuel Capacity: 304 gals.
Model Years: 1983—1994
Draft: 3'2"
Beam: 13'5"
Water Capacity: 80 gals.
Waste Capacity: 40 gals.
Length w/ Pulpit: --
A good-selling boat for Bayliner during her decade-long production run, the 3888 Motor Yacht (called the 3780 MY from 1983–89) has long been recognized as a good value for those seeking a comfortable diesel cruiser at an affordable price. Built on a low-deadrise modified-V hull, the key feature of the 3870/3888 was her innovative midcabin floorplan with a double berth that extends under the salon sole. A lower helm was standard in the salon, and there’s a surprisingly large master stateroom forward. Note that there are two heads in this layout, one with a tub/shower stall. On deck, the cockpit is large enough for a couple of deck chairs, and there’s seating for three on the flybridge. Early models were powered with twin 135hp Mitsubishi 6-cylinder diesels, but these engines were dropped in 1986 in favor of U.S. Marine 175hp diesels—an update that boosted the cruising speed from 14 to 16 knots. Later models with twin 210hp Hino diesels cruise at 17–18 knots. Fuel consumption at cruising speed is about a mile per gallon, which makes the 3888 MY an extremely fuel-efficient boat. About a thousand were built.