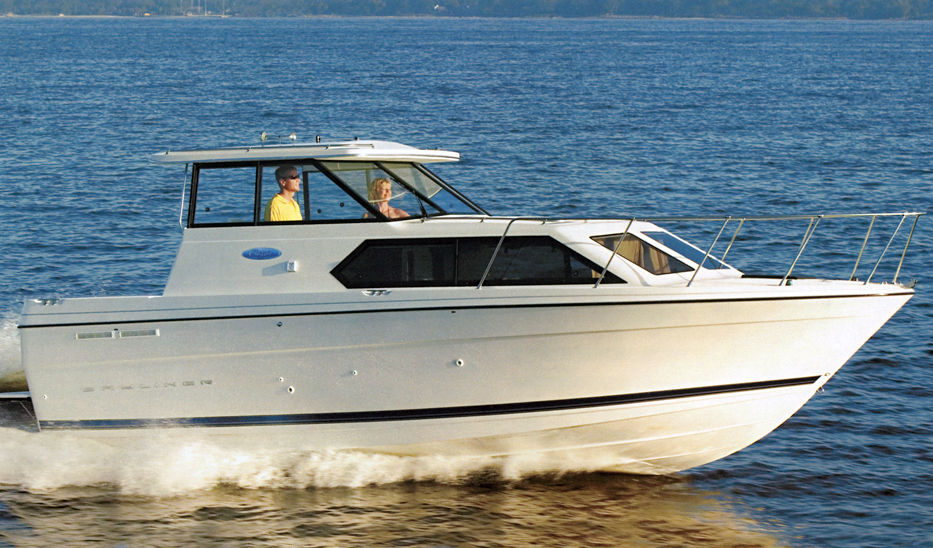 Name: 2859 Super Classic; 2859 Ciera Express
Length: 27'9"
Hull Type: Modified-V
Gross Weight: --
Fuel Capacity: 102 gals.
Model Years: 1993—2002
Draft: --
Beam: 9'9"
Water Capacity: 36 gals.
Waste Capacity: 30 gals.
Length w/ Pulpit: --
Originally called the 2859 Super Classic (1993–95), the Bayliner 2859 Ciera Express is a conservatively styled hardtop cruiser whose modest price and practical layout had great appeal to budget-minded buyers. The layout of this boat is similar to most hardtop models her size with the helm and sofa on the bridge deck, and the dinette, galley and V-berth on the lower level. What sets the 2859 apart from the norm is her amidships berth beneath the bridge deck—a layout that brings the sleeping capacity to six. A privacy curtain separates the forward berth from the salon, and there’s a handheld shower in the standup head compartment. While the cockpit of the 2859 Express is fairly small, it’s still large enough for a couple of light-tackle anglers or a couple of folding deck chairs. Additional features include a well-equipped galley with plenty of storage, a swim platform and boarding ladder, and a transom door. Among several sterndrive engine options offered over the years, a single 310hp MerCruiser will cruise at an economical 22 knots and reach a top speed of around 30 knots. Note the modest fuel capacity.