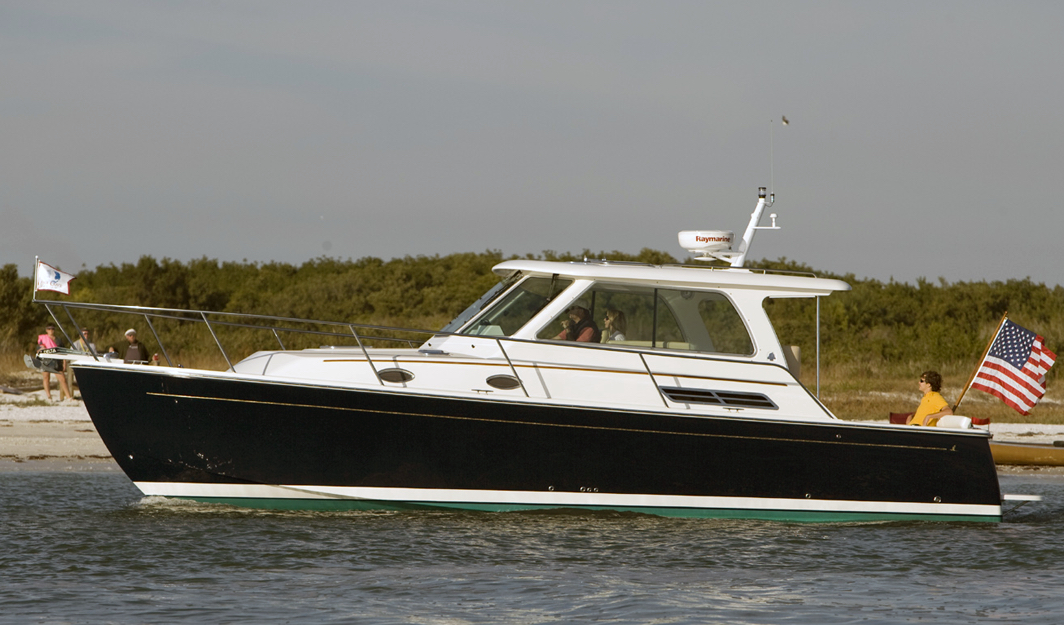 Name: 33-34
Length: 34'4"
Hull Type: Modified-V
Gross Weight: --
Fuel Capacity: 185 gals.
Model Years: 2007—2019
Draft: 3'1"
Beam: 12'0"
Water Capacity: 80 gals.
Waste Capacity: 40 gals.
Length w/ Pulpit: --
The Back Cove 33 (called the Back Cove 34 in 2012) is a handsome Down East cruiser whose single-diesel efficiency, versatile layout, and leading-edge construction made her one of the more appealing boats in her class. Like all Back Cove models, the 33 rides on a vacuum-bagged, PVC-cored hull with a reverse transom and a shallow prop pocket. The layout is as simple as it is elegant; a large bench seat in the cockpit and raised dinette on the semi-enclosed bridge deck provide seating for family and friends. Note that the in-line galley is positioned behind the helm, opposite the dinette, rather than in the cabin. The entire bridge deck lifts on hydraulic rams for engine access. Below deck is a large and comfortable V-berth forward, convertible L-settee with inlaid teak table to port, and a large head with separate stall shower to starboard. (Note that a queen berth forward is standard in the 34 model.) The cabin is finished with varnished cherry joinery, premium hardware, and an elegant teak and holly sole. Wide side decks are a plus, and a Stidd helm chair and bow/stern thrusters are standard. Cruise at 20 knots with 435hp Cummins—or 440hp Yanmar—diesel (mid 20s top).