All About the World Ocean 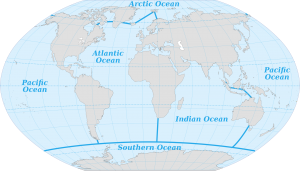 There is one global ocean making up 71% of Earth’s surface, but the global ocean is divided into distinct regions that have evolved over time based on cultural, geographical, historical, and scientific factors. These distinct regions are called ocean basins. Ocean basins are saucer-like depressions of the seabed that vary in size from relatively minor to vast structural divisions of the ocean. The deepest ocean basins are up to 2 to 3 miles deep and stretch from the outer edges of a continent to the ridges in the middle of the ocean, but the average depth is approximately 16,000 feet. In the past, there were four named oceans: the Atlantic, Arctic, Indian, and Pacific oceans. However, now most countries recognize that there is a fifth known as the Southern Ocean.

The Pacific Ocean is also the oldest of the existing basins, with some rocks discovered in its waters having been dated at around 200 million years old, and most of the important features of this ocean basin are associated with plate tectonics. Plate tectonics is the principle that describes how Earth’s outer layer is made up of solid rock pieces called plates that move over the molten material below. When two plates collide, the pressure can force the plates to fold up into mountain ranges or down into trenches at subduction zones. The stresses around these subduction zones are why the Pacific basin is responsible for many earthquakes and volcanoes, which is why the outside of this basin is also called the “Ring of Fire.”

The Atlantic Ocean is the second-largest, but it’s first when it comes to travel and how much it’s been studied thanks to how important ship traffic between Europe and North America is. With this intense study, we’ve learned that the Atlantic began to form during the Jurassic period 150 million years ago after a rift opened up and separated South America and Africa. The movement of continental plates in the Atlantic basin has created the Mid-Atlantic Ridge, which divides the eastern and western ocean floors into a series of basins called the abyssal plains. This ridge is more than 5,000 meters deep, but there’s a break in it at the equator that gives the deep ocean a gap to flow through. This gap influences the currents and temperatures of the Atlantic Ocean.

The Indian Ocean is the third-largest ocean and is bounded by Africa to the west, Asia to the north, Australia to the east, and the Southern Ocean to the south. There is no natural boundary that separates it from the Atlantic Ocean, but scientists generally draw the line between them at Cape Agulhas, South Africa. This basin is also divided in half by the Mid-Indian Ridge.

In 2000, the International Hydrographic Organization named the Southern Ocean as the world’s fifth ocean. It is not a true ocean basin, but it is still considered the fourth-largest ocean on the planet. It completely encircles Antarctica and stretches to the 60th parallel south, the limit of the Antarctic Treaty.

The Arctic Ocean is the smallest ocean basin on Earth. It extends south from the North Pole to the shores of Europe, Asia, and North America, and its total surface area is about 5.4 million square miles. Approximately a third of this ocean covers continental shelves; because of this, the average depth of the Arctic Ocean is only about 4,900 feet, and the deepest point is 17,880 feet.

Unlike the other oceans, the Arctic Ocean is covered with ice. Near the North Pole, the ice is permanent, but farther south, the ice can melt and move. Some of the ice forms “islands” that scientists have used as research bases.