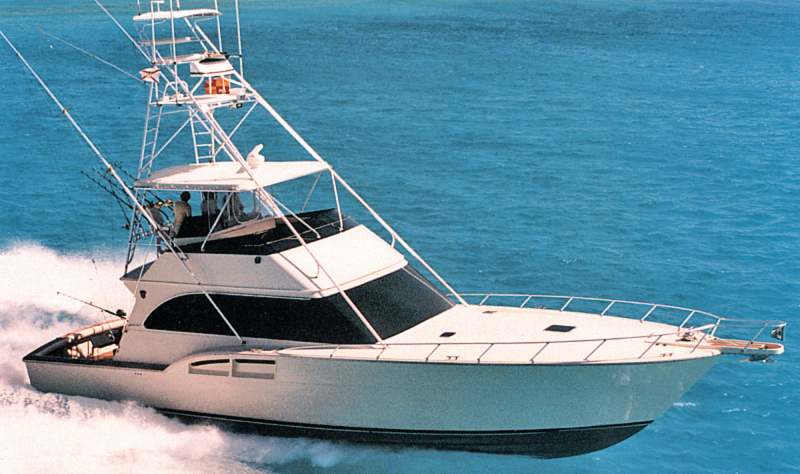 Name: 54 Convertible
Length: 54'0"
Hull Type: Modified-V
Gross Weight: --
Fuel Capacity: 1,000 gals.
Model Years: 1989—1995
Draft: 4'4"
Beam: 17'4"
Water Capacity: 240 gals.
Waste Capacity: --
Length w/ Pulpit: --
The Donzi 54 was introduced in 1989 as a follow-up to the successful 65, the first Donzi model built by Roscioli International. While the 54 never achieved the popularity of the 65, she is by any standard a finely finished yacht, and her muscular appearance and sturdy construction made her a standout design among other boats her size. She was built on a sophisticated foam/glass sandwich hull and while she’s clearly a heavily built boat, her dry weight of 51,000 pounds is relatively light compared with the Hatteras 54, Bertram 54 or Viking 53 convertibles, her three most notable 1990s competitors. Roscioli offered a choice of several galley-up, three-stateroom floorplans for the 54; because she was a semi-custom boat, however, the factory interiors were often altered to meet the requirements of owners. The huge cockpit includes the usual array of fishing amenities, and the engine room—with crouching headroom—is reached by lifting the steps at the salon door. Additional features include a huge flybridge with centerline helm, power-assist steering, an integral bow pulpit, and teak covering boards. MAN 1,050hp diesels cruise at 26–27 knots (30+ top).