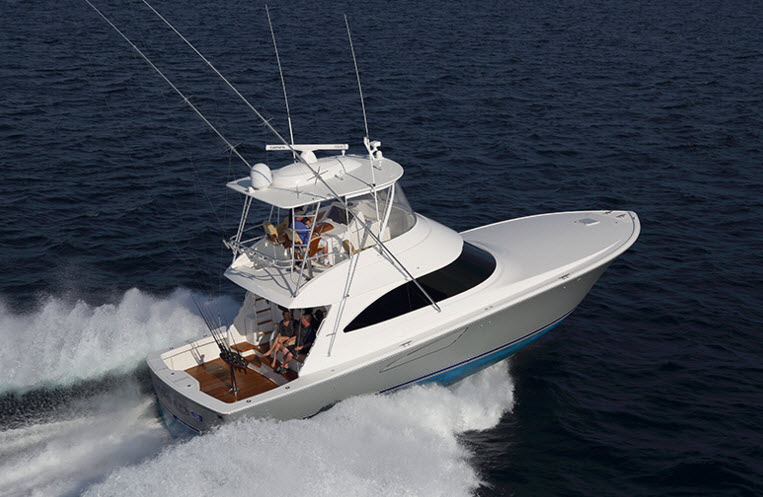 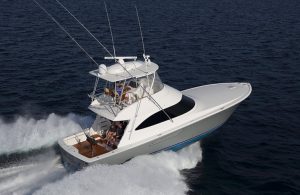 Name: 48 Convertible
Length: 49'1"
Hull Type: Modified-V
Gross Weight: --
Fuel Capacity: 1,190#
Model Years: 2017—2019
Draft: 4'8"
Beam: 17'0"
Water Capacity: 178 gals.
Waste Capacity: 52 gals.
Length w/ Pulpit: --
Building on the success of the 46 Convertible, the larger cockpit of the Viking 48 Convertible provides space under the sole for a Seakeeper gyrostablizer system. The 48 is a striking addition to the Viking product lineup with attractive styling and an impressive three stateroom layout featuring teak or walnut joinery depending upon the owner’s selection. The opulent interior provides the luxuries one might expect in a midsize motoryacht. Taking advantage of the wide 17-foot beam, the salon boasts an L-shape lounge and cocktail table to starboard, an inviting dinette to port, and peninsula galley forward with a raised bar top, under-counter refrigeration, microwave/convection oven and ample stowage behind the maple-lined cabinets. There are three staterooms and two full heads on the lower level including an amidships master with walkaround queen berth and two guest staterooms with upper/lower berths. A washer/dryer is located at the foot of the companionway stairs. The 130-square-foot cockpit features a bait prep station, freezer and in-deck fish box. One of the stowage bins flanking the fish box can be configured as a livewell. MAN 1200hp diesels cruise at 30 knots (mid 30s top).

Name: 48 Convertible
Length: 48'10"
Hull Type: Modified-V
Gross Weight: --
Fuel Capacity: 1,012 gals.
Model Years: 2002—2009
Draft: 4'9"
Beam: 16'6"
Water Capacity: 175 gals.
Waste Capacity: 50 gals.
Length w/ Pulpit: --
Introduced in 2002, the Viking 48 Convertible (note that Viking built an earlier 48-foot convertible in 1985–90) was yet another example of why Viking so dominates the market for premium, executive-class convertibles. It isn’t just beautiful styling that sets her apart from the competition; what makes the Viking 48 special is redundant engineering, exemplary fit and finish and superior open-water performance. Built on a modified-V hull with a broad 16'6"" beam, the Viking’s wide open interior is big for a 48-footer. The layout is arranged with the galley and dinette forward in the salon with a choice of two or three staterooms below. Both floorplans include two full heads as well as a standard washer/dryer adjacent to the companionway steps. Varnished teak cabinets, rich designer fabrics, and deep pile carpeting are applied throughout the interior. The spacious 130-square-foot cockpit sports a recessed fish box, bait prep station and direct access to the meticulous engine room. Note that the bridge ladder is positioned over the salon steps to save cockpit space. A spirited performer, 1,100hp MANs (or 1,015hp Cats) cruise at an honest 30 knots (34–35 top).

Name: 48 Convertible
Length: 48'7"
Hull Type: Modified-V
Gross Weight: --
Fuel Capacity: 680 gals.
Model Years: 1985—1990
Draft: 4'7"
Beam: 16'0"
Water Capacity: 200 gals.
Waste Capacity: --
Length w/ Pulpit: --
Built on a lengthened and reworked Viking 46 Convertible hull, Viking used the extra length of the 48 Convertible to create a huge, 144-square-foot fishing cockpit—still the largest to be found in a flybridge boat this size. Unlike the 46, the Viking 48 has a solid front windshield and a much-improved engine room. Like all Viking models, she’s heavily built on a low-deadrise modified-V hull with a wide beam, a shallow keel, and balsa-cored hullsides. In the original two-stateroom interior the galley and dinette are at mid-level. An alternate three-stateroom layout replaced the dinette with a small private cabin, and in 1989 the Plan “C” arrangement offered an L-shaped dinette on the deckhouse level and two very spacious staterooms. The 48’s massive cockpit is fitted with two in-deck fish boxes, a tackle center, and a transom door—all standard. The flybridge has seating for eight. Additional features include wide side decks, a molded pulpit, and a spacious engine room. A stiff ride in a chop, the Viking 48 will cruise at 23–24 knots with 550hp Detroit 6V92s (about 26 knots top). With 735hp 8V92s (standard in later models), the cruising speed is a fast 27–28 knots with a top speed of close to 30 knots.

Not the softest ride when the seas pick up.