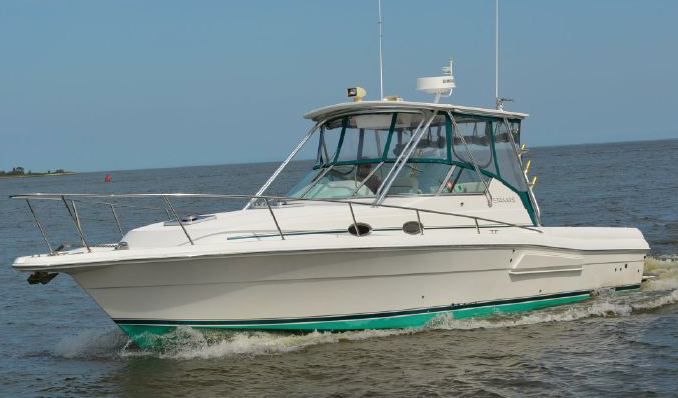 Name: 360-370 Express
Length: 37
Hull Type: Modified-V
Gross Weight: --
Fuel Capacity: 400 gals.
Model Years: 1992—2004
Draft: 2'4"
Beam: 13'2"
Water Capacity: 84 gals.
Waste Capacity: 25 gals.
Length w/ Pulpit: 39'2"
The Stamas 370 is a revised and updated version of the Stamas 360 Express built from 1992 through 1999. While the two boats look nearly identical, the 370 (pictured here) has a raised bridge deck (the cockpit of the 360 is flush) and full transom instead of the integrated swim platform of the original 360. These alterations result in slightly larger cockpit dimensions for the 370 as well as a cleaner, less cluttered cockpit area. Built on a solid fiberglass hull with prop pockets to level the engines, what separates the Stamas 360/370 from other express fishing boats is her midcabin interior, a layout more common to family express boats with V-drives or sterndrive power. The 370’s elevated bridge deck provides much improved helm visibility as well as more midcabin headroom. The cabin is open and well finished, and the forward queen berth lies behind a wood privacy door. Both the 360 and 370 have a full array of fishing amenities including a livewell, fish box, tackle storage and transom door. Engine access is excellent, and the side decks are wider than many express boats this size. Twin 370hp gas inboards cruise in the low 20s (30+ knots top), and 420hp Yanmar diesels cruise at 28–30 knots (mid 30s top).