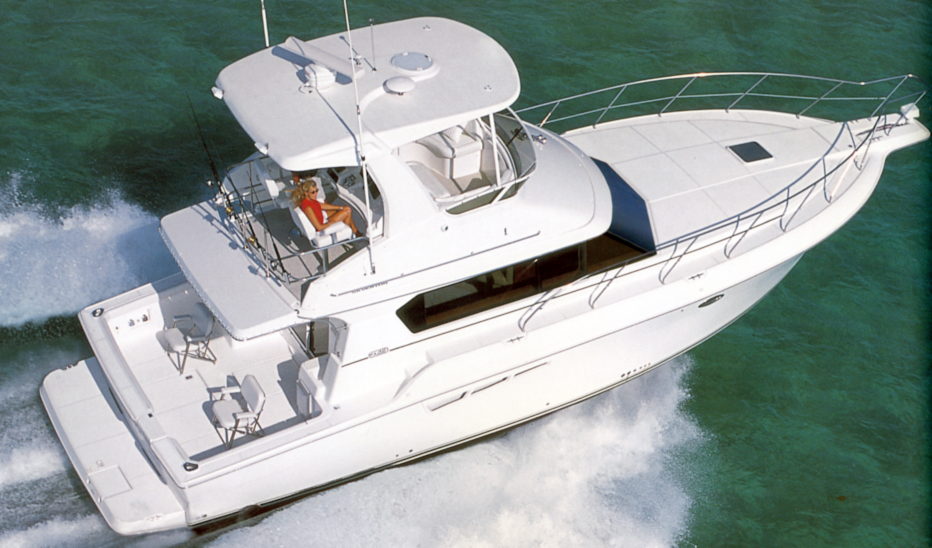 Name: 42 Convertible
Length: 42
Hull Type: Modified-V
Gross Weight: --
Fuel Capacity: 524 gals.
Model Years: 2000—2012
Draft: 3'7"
Beam: 14'11"
Water Capacity: 200 gals.
Waste Capacity: 40 gals.
Length w/ Pulpit: --
A good-selling boat, the Silverton 42 Convertible is a contemporary flybridge sedan whose spacious interior and large cockpit made her a good choice for family cruisers and anglers alike. A distinctive design with a rakish hardtop and aggressive styling, she’s built on the same proven hull used in the production of the earlier Silverton 41 Convertible. The two-stateroom interior of the Silverton 42 is a tasteful blend of cherry woodwork and earth-tone fabrics. An island double berth is located in the master stateroom, and the guest stateroom—also with a double berth—is tucked under the dinette. Note that the separate shower compartment is to port, opposite the head. On deck, the cockpit has an engine room access door as well as a transom door and built-in tackle center. Molded steps ascend to the flybridge with its centerline helm and bench seating forward. Additional features include very wide side decks, power cabin windows (optional), an overhead rod locker in the salon, and a bow pulpit. Note that the molded hardtop was optional. A capable performer with twin 440hp Cummins diesels, the Silverton 42 Convertible will cruise at 20 knots (mid 20s top).