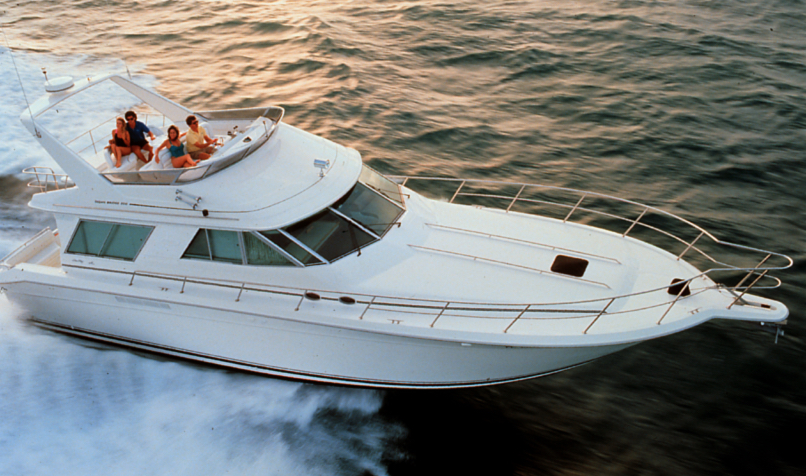 Name: 500 Sedan Bridge
Length: 50
Hull Type: Modified-V
Gross Weight: --
Fuel Capacity: 600 gals.
Model Years: 1990—1994
Draft: 4'2"
Beam: 15'0"
Water Capacity: 200 gals.
Waste Capacity: 40 gals.
Length w/ Pulpit: --
The largest model in the Sea Ray fleet when she was introduced in 1989, the 500 Sedan Bridge was considered a serious luxury-class yacht by the standards of her day. The hull is fully cored and it’s worth noting that Sea Ray had issues with cored hulls in the 1990s—something to keep in mind for perspective buyers. A good many sedan yachts this size have two staterooms, but the 500 has three including a big master stateroom and surprisingly roomy starboard guest stateroom. The third guest stateroom is located port featuring upper/lower berths. Aft in the companionway is a washer/dryer combo. The salon is impressive, a wide-open living area with cut-down galley, long leather sofa, and big wraparound cabin windows. Both heads have separate stall showers, but the second day head is on the small side. Topside, the flybridge of the Sedan Bridge is another big attraction—it’s huge with seating for 6–8 guests. The cockpit, however, is way small. The drooping bow of the Sea Ray 500 will raise eyebrows with experienced boaters (meaning there are probably better headsea boats). Detroit 550hp 6V-92 cruise at 20–22 knots.