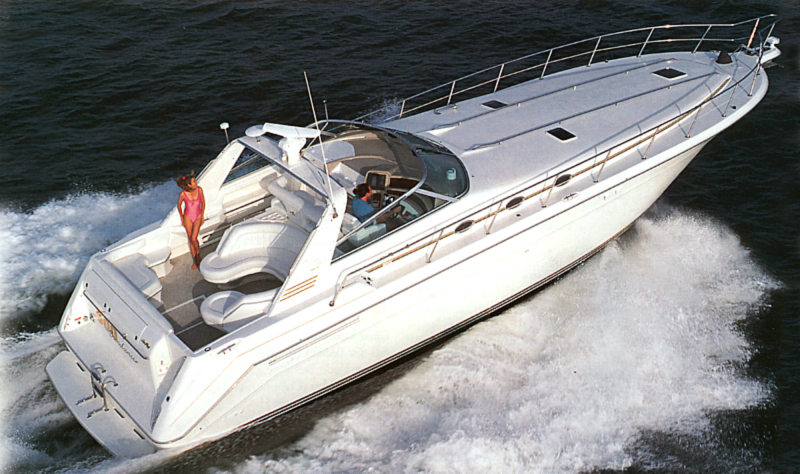 Name: 480-500 Sundancer
Length: 48
Hull Type: Modified-V
Gross Weight: --
Fuel Capacity: 500 gals.
Model Years: 1990—1999
Draft: 4'0"
Beam: 15'0"
Water Capacity: 150 gals.
Waste Capacity: 68 gals.
Length w/ Pulpit: --
Sea Ray’s largest Sundancer model ever when she was introduced, the 480 Sundancer (called the 500 Sundancer in 1992–99) was one of the most impressive express yachts on the market during the 1990s. With her long foredeck and sleek profile, the 480/500 combined luxury and extravagance in what was once a state-of-the-art package. Her sheer size is impressive enough, but it’s the expansive, high-style interior that caused first-time viewers to catch their breath. Here, laid out on a single level and presenting a panorama of curved bulkheads and designer furnishings, the Sundancer’s accommodations rival those of a small motor yacht. There are two private staterooms, two heads (each with a stall shower), a plush U-shaped sofa aft, and a wide-open salon with excellent headroom throughout. The cockpit—with its triple companion seat, full wet bar, and circular lounge seating—can seat a small crowd. Additional features include a reverse sport arch, wide side decks, and a huge engine room. Early models with 485hp 6-71 V-drive diesels cruise in the low 20s (about 25 knots top). Later models with 735hp 8V92s cruise at nearly 30 knots. Note that oval ports replaced the original sliding cabin windows in 1994.

High-impact Sea Ray express from the 1990s set class standards in her day for everything that counted.