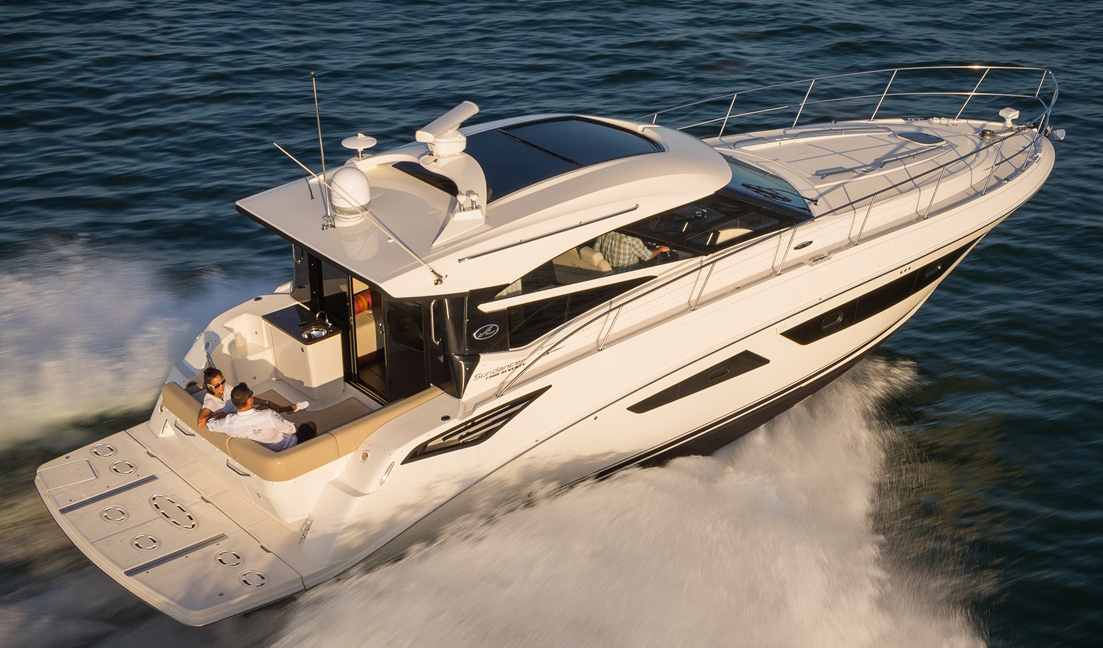 Name: 470 Sundancer
Length: 47'3"
Hull Type: Deep-V
Gross Weight: --
Fuel Capacity: 350 gals.
Model Years: 2015—2017
Draft: --
Beam: 14'0"
Water Capacity: 100 gals.
Waste Capacity: 42 gals.
Length w/ Pulpit: --
Introduced in 2015, the Sea Ray 470 Sundancer is a significantly updated version of the previous 470 Sundancer (2010–14). The hull and pod-drive propulsion are the same and so is the tankage, but that’s about it—the new 470 has an enclosed pilothouse (more like an observation deck), and the interior is better suited for cruising than the original 470 Sundancer. She’s also a lot heavier, but even with the extra weight performance is excellent for her class. Below, there are two large staterooms in the 470 Sundancer including a spacious full-beam master with hullside windows and private ensuite head. In this layout, the large staterooms come at the expense of a small lower-level salon—no problem, actually, since the fully enclosed pilothouse is the social center of the boat. The helm comes standard with a radar/chart plotter combo, and power options include standard Cummins 550hp V-drive inboards or Zeus drives. Additional features include Skyhook (dynamic positioning) technology, joystick controls, and a state-of-the-art entertainment system. Twin Zeus drives linked to Cummins 480hp diesels deliver a top speed in the neighborhood of 30 knots.