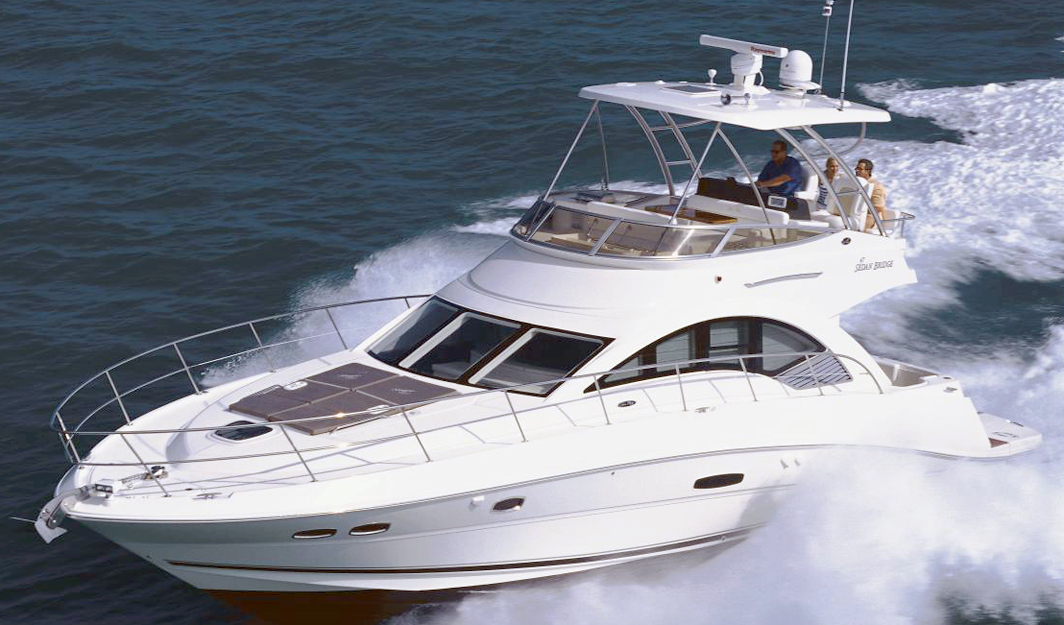 Name: 47 Sedan Bridge
Length: 50'8"
Hull Type: Modified-V
Gross Weight: --
Fuel Capacity: 530 gals.
Model Years: 2008—2009
Draft: 4'2"
Beam: 14'8"
Water Capacity: 117 gals.
Waste Capacity: 60 gals.
Length w/ Pulpit: --
Sea Ray’s series of Sedan Bridge models have been popular since the original 340 Sedan Bridge came out back in 1983. Characterized by their low-profile appearance and inboard V-drive power, modern Sedan Bridge models combine the versatility of a flybridge yacht with the accommodations of a high-end luxury cruiser. Built on a modified-V hull with cored hullsides and prop pockets to reduce shaft angles, the two-stateroom interior of the Sea Ray 47 differs from most sedan floorplans in that the galley is positioned aft in the salon rather than forward, a design that reduces a lot of foot traffic through the salon. The dinette is forward, two steps up from the salon level, where guests can enjoy a panoramic view of the water. Below decks, an opulent, full-beam master stateroom is amidships while the VIP guest stateroom is forward. Both are fitted with queen island beds and flat-screen TVs. The party-time flybridge of the 47 Sedan Bridge—accessed via wide bridge steps—is arranged with the helm aft and lounge seating forward. A fiberglass hardtop and extended swim platform were standard. Cummins 600hp V-drive diesels cruise at 25 knots (about 28–30 top).

Premium decor with cherry woodwork, leather seating is state of the art. Hardtop is standard.