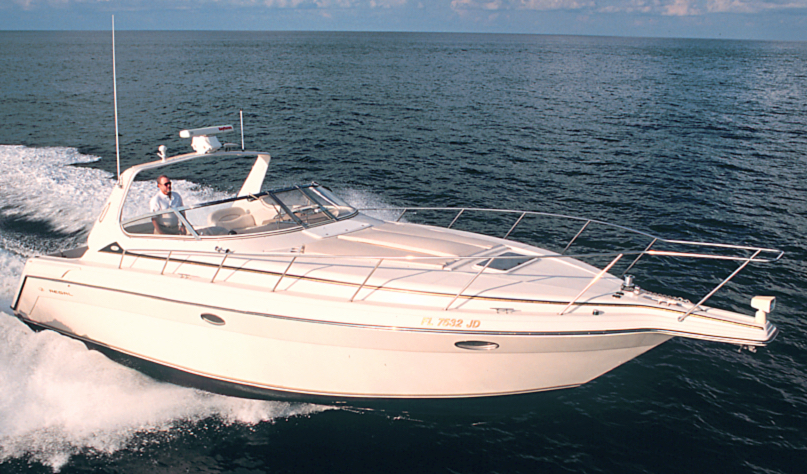 Name: 380-400-402 Commodore
Length: 38
Hull Type: Modified-V
Gross Weight: --
Fuel Capacity: 265 gals.
Model Years: 1991—1999
Draft: 3'0"
Beam: 13'1"
Water Capacity: 125 gals.
Waste Capacity: 65 gals.
Length w/ Pulpit: --
Regal is one of those manufacturers prone to renaming the same boat every so often just to keep it fresh in the minds of dealers and customers. Such is the case with this popular family cruiser: Called the 380 Commodore in 1991–92, she was re-branded as the 400 Commodore in 1993–94, and in 1995—with a new interior and redesigned cockpit—she became the 402 Commodore. Always a popular model, she rides on a modified-V hull with a solid fiberglass bottom and prop pockets to reduce draft. Below deck, the floorplans of all three models feature privacy doors for both staterooms, a full galley, and a separate stall shower in the head. The 402 Commodore has an offset double berth in the forward stateroom as well as a leather salon sofa, while the aft galley location in the 380 and 400 models makes it easily accessed from the cockpit. Note the standing headroom in the aft cabin—a rare luxury in a boat this size. Additional features include an electric engine compartment hatch, side exhausts, and a roomy cockpit with seating for eight. Standard 310hp MerCruiser gas engines cruise at 18–19 knots (27–28 knots top), and optional Cummins 330hp diesels cruise at 26 knots (about 30 knots top).