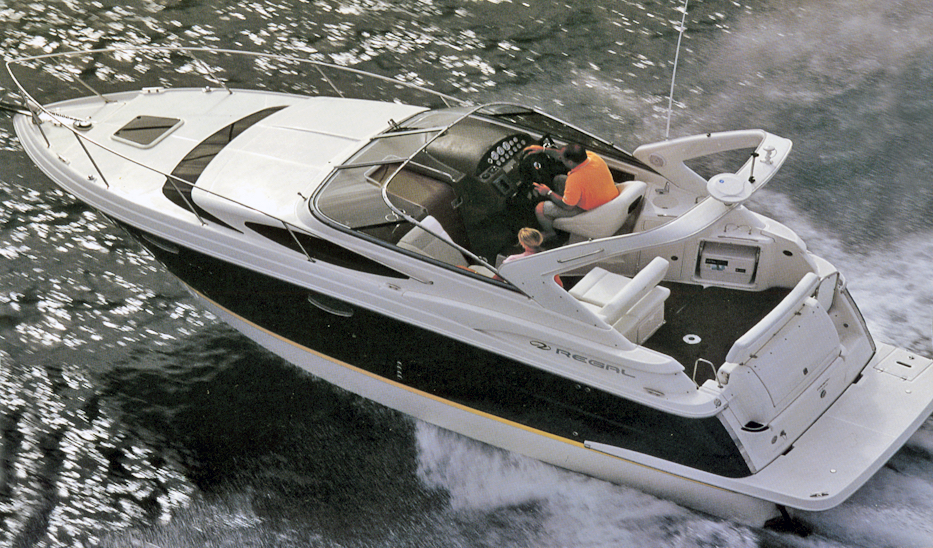 Name: 2860 Window Express
Length: 29'5"
Hull Type: Modified-V
Gross Weight: --
Fuel Capacity: 100 gals.
Model Years: 2006—2011
Draft: --
Beam: 9'6"
Water Capacity: 35 gals.
Waste Capacity: --
Length w/ Pulpit: --
Every once in a while, something new in the way of boat design comes along that catches the boating public’s imagination. Such was the case in 2006 when Regal introduced the 2860 Window Express. As the name implied, a “window” was integrated into the cabin overhead, a feature that didn’t exist in other boats. The effect of this increased natural lighting in the cabin was well described when Boating Magazine’s Peter McDonald wrote in a review of the 2860, “I've never set foot in a midsize cruiser that felt so welcoming belowdecks.” Built on a modified-V with moderate beam and a keel pad, the cockpit of the Window Express is arranged in the normal fashion with an L-lounge to port, transom bench seat, and a refreshment center with cooler, sink and storage behind the helm. A large storage locker built into the transom has space for fenders, toys, and docking lines. Note the pull-up cleats on the swim platform. Below, the midcabin interior of the Regal 2860—an appealing blend of cherry cabinets, Corian galley counter, and designer fabrics—is a match for the best boats in her class. Twin 220hp MerCruiser I/Os cruise at 25 knots (38–40 knots top).