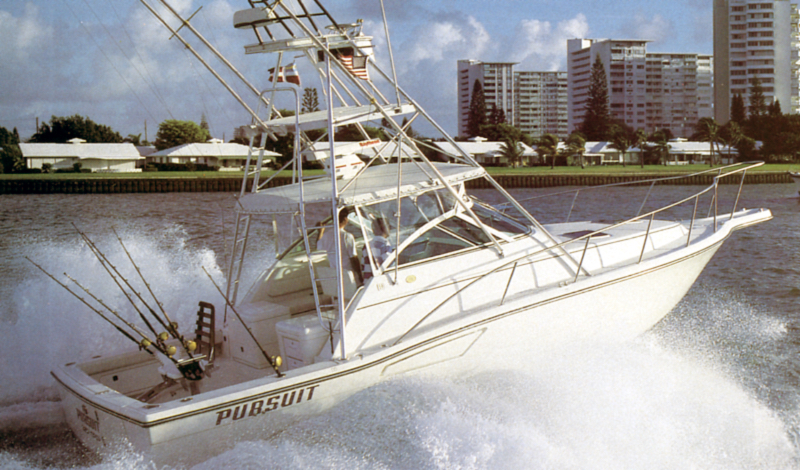 Name: 3250 Express
Length: 33'0"
Hull Type: Modified-V
Gross Weight: --
Fuel Capacity: 305 gals.
Model Years: 1990—1992
Draft: 2'8"
Beam: 12'6"
Water Capacity: 50 gals.
Waste Capacity: --
Length w/ Pulpit: --
A big 33-footer with a wide beam and tons of deck space, the Pursuit 3250 Express (called the 3300 Express in 1993) got off to a bad start when she was introduced in 1990 because of a bow-high running angle that made for poor forward visibility at cruising speeds. In 1991, therefore, the bottom was redesigned to improve the situation while adding a knot or two on the top end. Compared with other inboard cuddies of her era, the 3250 was priced higher than most but enjoyed a relatively short 3-year production run. A sampling of her standard features include flush-mounted trim tabs, excellent nonskid surfaces, an in-floor 20-gallon livewell, washdown outlets, and a transom door. Below, the Pursuit’s upscale cabin is arranged with V-berths forward, a compact galley, convertible dinette, and a classy teak-and-holly sole. The entire command deck raises on hydraulic rams for access to the machinery, but the engines are so close together—and headroom so limited—that getting at the engines is difficult. Gas engines were standard but most 3250s were delivered with diesel power. Expect a cruising speed in the mid 20s with 300hp Cat or Cummins diesels (30+ top).