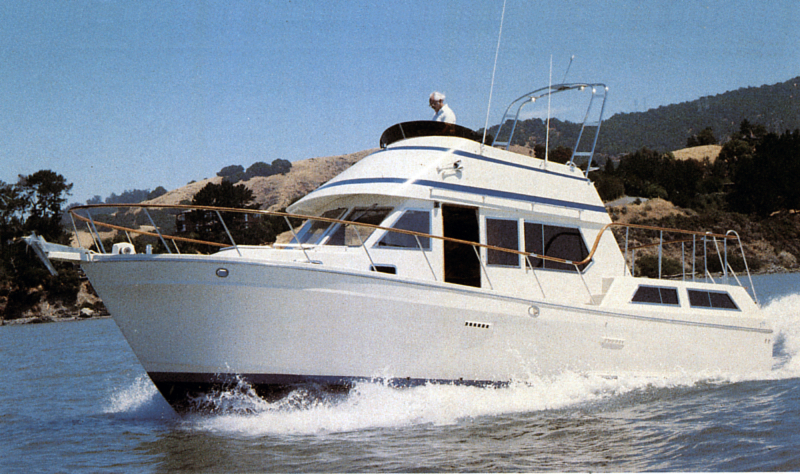 Name: 35 Sundeck
Length: 35
Hull Type: Modified-V
Gross Weight: --
Fuel Capacity: 300 gals.
Model Years: 1984—1990
Draft: 3'0"
Beam: 12'6"
Water Capacity: 100 gals.
Waste Capacity: 50 gals.
Length w/ Pulpit: --
The PT 35 Sundeck will appeal to those seeking a compact double-cabin trawler without the high-maintenance exterior teak found on many Asian imports of her vintage. Packing two reasonably sized staterooms and two heads into a 35-foot hull is no easy task but the PT 35 pulled it off as well as could be expected. No lightweight, she’s heavily built on a solid fiberglass hull with moderate beam, hard aft chines, and a cutaway keel. Several two-stateroom floorplans were offered in the PT 35 during her production years, too many to include here. A galley-down layout appears to have been the most popular, and all floorplans featured a standard lower helm with sliding deck access doors. The aft head has a separate stall shower, while an opening center windshield provides fresh air in the cabin. Just about everything below is either built of teak, trimmed with teak, or covered with teak. On the downside, the side decks are narrow and window leaks are common. Several single- and twin-diesel engine options were available. Twin-diesel models are capable of 18–20 knots top.