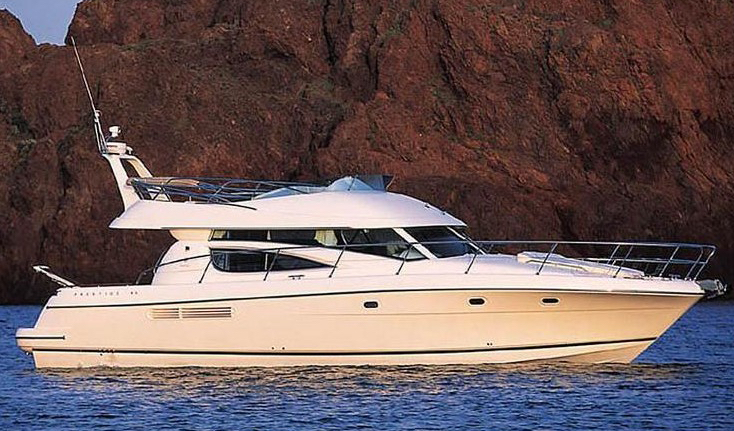 Name: 46 Fly
Length: 47'8"
Hull Type: Modified-V
Gross Weight: --
Fuel Capacity: 404 gals.
Model Years: 2005—2010
Draft: 3'11"
Beam: 14'3"
Water Capacity: 151 gals.
Waste Capacity: 43 gals.
Length w/ Pulpit: --
The Prestige 46 is French, built by Jeanneau and distinctively designed with split-level cabin windows and three staterooms (four if you count the aft crew quarters under the cockpit lounge)—impressive accommodations for a boat under 50 feet. In fact, the ability to pack three separate staterooms and two heads into a 46' flybridge yacht and still have room for a comfortable salon and a lower helm is unmatched by any other manufacturer. The galley is set down slightly but still remains part of the main cabin so anyone working there won't be separated from the fun. Note the mini-dinette opposite the lower helm. Both the forward owner’s cabin and starboard VIP stateroom have double berths, but because the berth in the VIP cabin is up against the bulkhead it's difficult to get in and out. The port guest stateroom has side-by-side berths, and both heads have separate stall showers. The cockpit, shaded by a bridge overhang, provides easy access to the side decks and flybridge. Engine room access is through a hatch in the salon or lazarette. Up top, a big sun pad lifts up to form a second seat around the circular table. Cummins QSC 8.3 500hp diesels cruise at 24–25 knots (30 top).