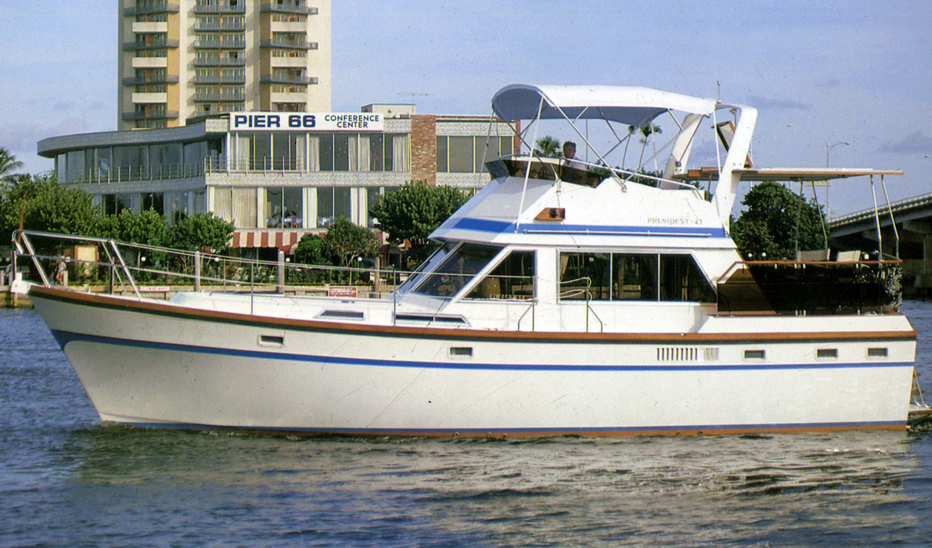 Name: 41 Double Cabin
Length: 41
Hull Type: Semi-Disp.
Gross Weight: --
Fuel Capacity: 420 gals.
Model Years: 1982—1987
Draft: 2'10"
Beam: 13'5"
Water Capacity: 120 gals.
Waste Capacity: 60 gals.
Length w/ Pulpit: --
With her crisp styling, Burma teak interior, and modest price, the President 41 Double Cabin was one of the more popular imports during the 1980s. Like most Asian trawlers of her era, the 41 rides on a solid fiberglass semi-displacement hull with a deep forefoot and a long prop-protecting keel. With a beam of just 13'5"", the President 41 can’t be described as spacious although the accommodations are space-efficient and comfortable. Several two- and three-stateroom interiors were offered during her production years, all with two heads and a standard lower helm. Large windows insure excellent visibility from the lower helm, and hatches in the teak-and-holly cabin sole provide easy access to the engine room. The galley is down in the two-stateroom interiors, opposite a booth-style dinette to starboard. The forward head does not contain a separate stall shower. A teak sole and wet bar are standard on the President’s covered aft deck. The flybridge has the helm forward and guest seating aft. Most President 41s came with 120/135hp Lehman diesels that cruise (very efficiently) at 8–9 knots. Larger 275hp Lehmans cruise at 12–14 knots. Over 115 were built.

Popular Taiwan import with full teak interior, modest price became one of the best-selling boats of her type during the 1980s.

One of the more efficient boats of her type. Over 120 built.