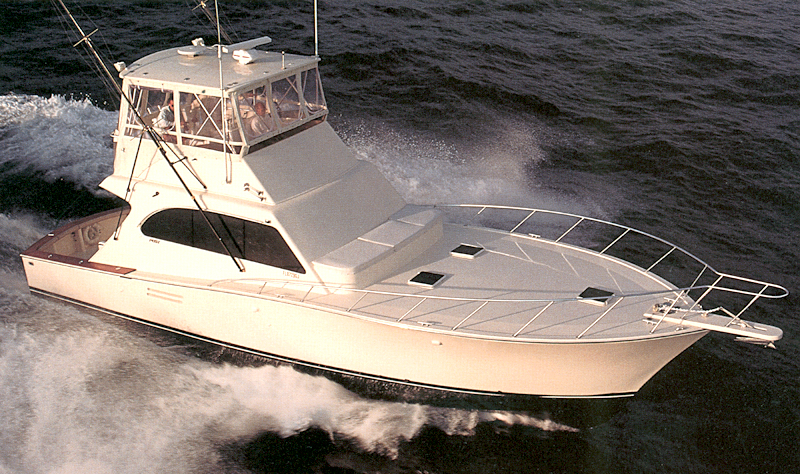 Name: 46 Sport Fisherman
Length: 46'9"
Hull Type: Modified-V
Gross Weight: --
Fuel Capacity: 620 gals.
Model Years: 1978—1996
Draft: 3'10"
Beam: 15'9"
Water Capacity: 120 gals.
Waste Capacity: 31 gals.
Length w/ Pulpit: --
The original Post 46 was introduced back in 1978 as a stretched version of the popular Post 42. Hull construction is solid fiberglass and her tapered form and low transom deadrise resulted in a boat quick to accelerate and fast over the water. In 1988, Post introduced the 46 II model with a little more transom deadrise and a deeper forefoot for improved head-sea performance. Several two-stateroom floorplans were offered in the Post 46/46 II during her production years, and all are notable for their quality joinery and furnishings. What really distinguishes the 46 from the offerings of other builders is, of course, her sensuous and graceful styling, long a Post trademark. Cockpit access to the engine room of the 46 II became standard in 1992, and in 1995 a much-improved standup engine room resulted from moving the fuel tanks aft. Among several engine options, early models with 410hp 6-71 Detroit diesels cruise at 21 knots. Later models with 485hp 6-71s cruise at 23–24 knots, and 625hp 6V92 diesels cruise at around 25 knots. A well-regarded boat, used Post 46 models are nearly always in demand. Note that the Post 47 is an updated 46 II with a wider flybridge and revised interior choices.