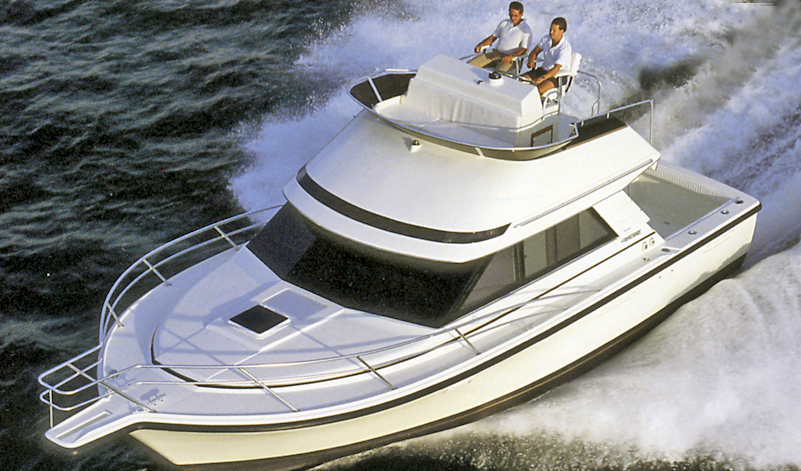 Name: 33 Convertible; 33-34 SFX
Length: 33, 34
Hull Type: Modified-V
Gross Weight: --
Fuel Capacity: 300 gals.
Model Years: 1987—1999
Draft: 2'9"
Beam: 13'0"
Water Capacity: 70 gals.
Waste Capacity: --
Length w/ Pulpit: 36'9"
The Phoenix 34 SFX Convertible (called the Phoenix 33 Convertible in 1987–94) was a popular model for Phoenix during the 1990s thanks to her sturdy construction, a big fishing cockpit, and a very space-efficient interior layout. The hull—strengthened with a full-length inner liner—is essentially a deep-V with propeller pockets to allow the engines to be moved aft without increasing the shaft angle. Several floorplans were offered during her production years, all with the galley down from the salon and all with a stall shower in the head. These are particularly well-finished interiors with quality fabrics and furnishings throughout. On deck, cockpit freeboard is fairly low, and nearly all of the 144-square-foot area is usable fishing space. Engine boxes make access to the motors easy, and a transom door, in-deck storage, and washdowns were standard. The flybridge is big for a 34-footer with seating for five and lockable rod storage. Among several gas and diesel engine options, a pair of 320hp gas engines cruise the Phoenix 34 SFX at 19 knots and top out in the high 20s. Later models with 350hp Cat 3116 diesels cruise at 22 knots (30+ top).